Renowned French jeweller Christophe Lemaître visited HKDI to discuss what it takes to design pieces that can command a place at one of Place Vendôme’s globally renowned boutiques. He spoke to daisy zhong about achieving a marriage of craftsmanship and creativity.

Working for big brands as a jewellery designer is frustrating because you have to work within a marketing strategy,” says Christophe Lemaître. “You’re constrained and it’s impossible to follow your own creative instincts.”Lemaître now works as an independent designer, nurturing his personal creativity and extensive client list as a global traveller. He has found the change to be refreshing; as an artist jeweller, even working with the most prestigious fine jewellery brands in Paris and creating bespoke pieces for high-end customers, he found that the burgeoning influence of marketing people has become a problem for giant luxury brands.“These companies invest vast quantities in marketing to have their brands visible in the most prestigious shopping malls worldwide and marketing creates a tendency to observe what works for the audience and base a design on that,” he says. “Because of the high financial stakes, the designers at the big houses need to follow a direction largely decided by the marketing department, and produce things that will sell. For this reason, creativity suffers – and the result is a jewellery world where everything becomes the same.”

As part of Lemaître’s trip to launch his latest collection in Hong Kong, the jeweller/artist visited HKDI in November 2013 to share his journey from being a young man who followed big brands to becoming a design jeweller and the master of his own creations.

After training in jewellery making and design, Lemaître attended the Institut National de Gemmologie (National Institute of Gemology) to develop expertise about precious stones. His professional career began as an assistant for jewellery designer Pascal Morabito.

In 1998 when Bernard Arnault decided to launch Dior’s first high jewellery collection, Lemaître was chosen to work in John Galliano’s team. “I designed the jewellery together with two others, one was responsible for the style and the other being a designer/draftsman like me. I was researching Dior’s design language, to understand its traditions and integrate the motifs and symbols used in haute couture into haute jewellery. It was a hugely rewarding experience.” 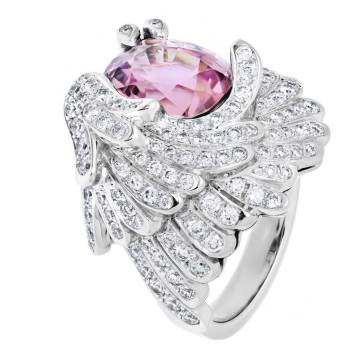 His sense of aesthetics and professionalism in fine jewellery were further polished during his subsequent experience at the Place Vendôme ateliers of Boucheron, Van Cleef and Arpels and Fred. “To stand out in this highly competitive industry, you need to excel in every aspect of jewellery-making: from design to production, from conceptualising to visualising to welding and polishing.”

The masterpieces that Lemaître participated in creation included a Fred tiara for Jordan’s Princess Rania (“You need to be extremely careful when handling it because the joints are delicate”) and a belt for the king of Morocco by Boucheron.

As Lemaître built up his reputation working on sophisticated and highly technical pieces, companies such as Bvlgari, Van Cleef and Arpels, Cartier, Fred and Chaumet began to regularly commission pieces from him that suited his highly developed expertise.

Lemaître established his own atelier in 2009 at the Palais Royal, a 17th Century palace opposite the Louvre composed of arcaded galleries surrounding a garden – and a renowned haunt of art and antique dealers. A large proportion of his clients, of course, come from Place Vendôme.

In 2012, during the Biennale des Antiquaires, one of Paris’ most prestigious fine art and jewellery shows, Lemaître was charged with restoring Hollywood legend Elizabeth Taylor’s 1962 Bvlgari emerald necklace, accidentally broken at the exhibition, in just one day.

However, it is the other side of being an independent atelier that he finds most rewarding. “I know luxury trends, I know everyone in the Place Vendôme, but I also do my own creations: I am an artist designer who does custom-made pieces; I have my own aesthetics, and I can influence my clients.”

He believes that custom-made jewellery offers both creative freedoms for him and uniqueness for his clients. “Creating unique pieces for private clients is just fantastic because the design of a unique jewel is linked to an encounter, a sharing and an exchange. The jewel will be shaped according to the wishes of the person who told me about his personal history, his desires and his passions. In my jewellery design, I found much more freedom; I found my true self.”

For Lemaître, he can now base his design on creativity and keep going beyond where the marketing people would normally draw limits.

The other aspect of this freedom, says Lemaître, concerns the selection and use of gemstones. “For example, in my 2013 Collection, I adopted some of the lesser-used gems in my works. One of my priorities as an independent jeweller is to find exceptional gemstones.”

He says that some of these stones would be impossible to use under the control of big companies. “Marketing is always about precious stones, which means limited choices. I am very audacious in choosing stones and I like to have non-conventional stones, yet marketing says I can’t use these because nobody knows them.”

For instance, feldspar, an unpopular material among jewellery makers, is one of Lemaître’s favourite materials. “Feldspar is rarely used because its surface is not so bright; but I have found a piece that is different because it has the characteristics of a gemstone. Ten years ago, Cartier bought this piece from a mine in Congo and the brand planned to develop a new product. However, this was never realised because feldspar of this high level of quality is really rare, making it hard to mine in economical quantities.” The feldspar gemstone was therefore “forgotten” for 10 years until it had a chance to shine again with Lamaitre’s decision to purchase it and produce a truly unique piece.

Apart from feldspar, his favourite gemstones include diamonds, crystal, Lapis lazuli, spinels, Tourmaline Paraiba, Tanzanite and Spessartite. “I like to experiment with different kinds of materials, colours and textures to create different effects and beautiful contrasts.”

And Hong Kong is the place Lemaître has found to be the world’s best stone hunting ground to facilitate his pioneering work. “It’s no longer Basel or Israel. Most of the stones I use come from Hong Kong dealers. We’ve seen extraordinary pieces here.”

He says that it’s important to maintain good connections with jewellery dealers to obtain the best selling prices and offer his clientele the most cost efficient and highest quality products. “Recently, I’ve created a piece for the Aga Khan, who wanted to find an exceptional diamond for a wedding ring for his fiancée. The diamond I offered him weighed 6.8 carats of type 2A, indicating its rarity in clarity and brilliance. I got the diamond in competition with Harry Winston.”

Ultimately, jewellers are stone transformers and Lemaître’s calloused yet nimble hands vividly illustrate the intimate relationship between goldsmith and gemstone.

“For a successful jewellery designer, technical knowhow is as important as creativity. You need to know the gem, its texture and characteristics – and only when you understand these details can you make great design.”

To achieve the right balance of creativity and craftsmanship – that’s a piece of advice that every designer should bear in mind.