Vegetables are the new chic on Chinese banquet tables

After a decade in which Iberico pork, wagyu beef and french chicken were the most desirable menu items for millionaire entrepreneurs in China, some of the country’s wealthiest sophisticates are turning to vegetarianism, driven by fears for the environment and their own mortality. As Daisy Zhong and Summer Cao report, these rich carrot crunchers could be cooking up a new recipe for the planet’s survival. 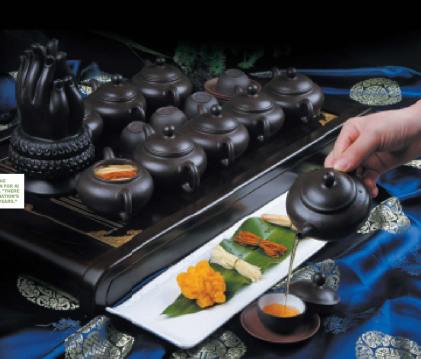 [dropcap size=small]W[/dropcap]ang Zhiping is one of the most prominent practitioners of Hubei cuisine on the Chinese mainland. He used to specialise in meat dishes, but two years ago, he became the head chef at one of China’s few high-end vegetarian restaurants, Lian Xin. He now deems meat to be “totally unnecessary”.

“Meat dishes require a lot of processing to make them acceptable, whereas vegetables are fresh and appealing by themselves,” he says. “I never thought a vegetarian restaurant could be such a hit; but I helped my friends, the famous singers Liao Sha and Ye Mao, to open one in 2002. The restaurant made a profit during its first month. So I started my own vegetarian restaurant business in 2009.”

Wang is now developing a vegetarian “state banquet”, priced at 2400 RMB per person. “The banquet is an opportunity for me to combine vegetarianism, the richness of Chinese culture and environmental protection all in one. I’m sure it will help to promote vegetarianism among China’s wealthy class.”

According to Wang, vegetarianism is spreading across China’s affluent cities, as more and more people substitute a high-fat and protein diet for one rich in fruits and vegetables. Many of these new vegetarians are either wealthy and well informed, or else they are seizing the opportunity to earn a fortune by founding high-end restaurants specialising in gourmet meatless dishes.

Vegetarians and vegans (who reject dairy products as well as meat) face plenty of obstacles in China. A banquet with abundant meat dishes has always symbolised hospitality, wealth and power. On the other hand, vegetarianism has long been associated with weak, impotent and humble people, as expressed in the Chinese colloquial expression “I am not just eating vegetables”, meaning “I am a strong and capable person”.

“The negative connotations of giving up meat make people reluctant to try the vegetarian lifestyle,”

says Dr. Yu Li, a vegan for 20 years and founder of the Beijing and Wuhan Vegan Hut, arguably the first vegan brand in China. He adds that, although nutritionists have long proved meat can damage a person’s health, it is still hard for most Chinese people to accept this fact.

Average annual meat consumption in China has risen from around four kilograms per person 50 years ago to around 60 kilograms now, according to the NGO Compassion in World Farming (CWF); and the upward trend is set to continue. Joyce D’Silva, CWF’s Director of Public Affairs and author of The Meat Crisis says, “The figure for Europe stands at around 90 kilograms and for the US possibly over 120 kilograms. Probably China’s growing urban middle class is already eating the same volume as Europeans, or even Americans.”

Meanwhile, vegetable consumption in China has decreased in the last 20 years by 50%, while the consumption of meat has increased by 81% and eggs by 51%.

“The traditional Chinese diet was plant-based, but it is now shifting to meat-based. People are consuming more fat and fat-dense calories,” says Dr Duo Li, coordinator of the 5th Asian Vegetarian Union Congress and Professor of Nutrition at Zhejiang University. He adds that the surging number of cases of obesity, diabetes mellitus, cancer and cardiovascular diseases on the Chinese mainland is a strong signal that the Chinese diet has taken a dangerous wrong turn.

Against this backdrop, vegetarian entrepreneurs are creating gourmet meatless restaurants and dishes aimed at the well-informed and wealthy. Many of them offer an experience that combines dining and education. Dr Yu’s Vegan Hut
holds regular Friday seminars to share ideas and research about vegetarianism. “At present, I tend to promote the benefits of plant-based nutrition, rather than vegetarianism,” he explains.

“Just as primary school students find calculus difficult at first, it is equally problematic for meat eaters to try traditional vegan food, whose perceived benefits are just becoming apparent. We have decided to target these hesitant customers, and help them learn more about vegan and vegetarian food.”

For Shi, the ambience of a vegetarian restaurant is vital to its mission.

“Only by providing a fantastic eating experience can we attract people’s interest and familiarise them with vegetarianism.”

Shi hired a world-famous designer to renovate his restaurant, which he claims is the first vegetarian eatery with a western-style dining environment in China. He has also invited a red dot award winner to revamp its website in December, with the aim of reaching out to rich and sophisticated people who might try vegetarian food.

Shi’s view accords with that of Liu Mingxu, general manager of the New Generation Vegetarian restaurant in Shanghai, who says, “Our restaurant attracts a lot of white-collar workers who enjoy vegetarian food. The most elaborate vegetarian dishes require chefs with at least 15 years of experience.”

Eating less meat is also in tune with preserving the planet, another interest that is growing among China’s nouveau riche.

“Becoming wealthy encourages greater consumption of expensive foods,” says Dr. T. Collin Campbell, project director of the China-Oxford-Cornell Diet and Health Project at Cornell University in the United States. “But, far too often, these foods are highly processed, with lots of salt, sugar and fat. Plus, animal-based foods increase the risk of heart disease, cancer and diabetes.”

Campbell’s seminal book, The China Study: Startling Implications for Diet, Weight Loss, and Long-Term Health is the most comprehensive profile of Chinese health and nutrition ever conducted. It concludes that the increase in meat consumption is responsible for the growth of many of China’s new “diseases of affluence”, including diabetes and stroke.

Meat contains fourteen times as much pesticides as plant foods, because animals are at the top of the food chain. Dioxins, potentially lethal environmental pollutants, are found throughout the environment, and they accumulate in the food chain, particularly in the fatty tissues of animals. According to the WHO, more than 90% of human exposure to dioxins is via food, mainly meat and dairy products, fish and shellfish. 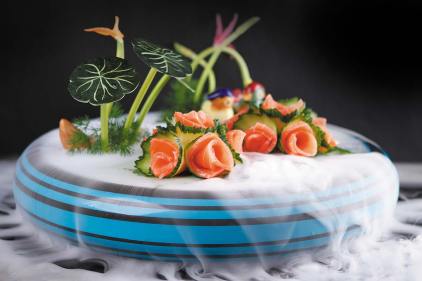 “As consumption of meat and other animal-based foods increases, the risk of diseases that are very expensive to treat will also rise,” says Dr. Campbell. “As a result, a lot of the wealth a person accumulates in his or her lifetime may end up being spent on treating illnesses later on.

“It is especially important for Chinese people not eat dairy products that increase blood cholesterol, cause heart disease, and raise the risk of osteoporosis – a finding that is the exact opposite of what the dairy industry has been saying.”

“Everyone should have compassion for animals and the earth,” says Wang, the founder of Lian Xin. “I am very happy to find my son is promoting vegetarian diets to his teachers and friends.”

China is now the world’s top consumer of meat and grain. Mainland Chinese eat twice as much meat as they did in the mid-1980s. Meat production reached 76.5 million tons in 2005, a 5.7% increase on the previous year’s figure and more than twice as much as the United States. The volume is expected to continue rising at the rate of 5% a  year. Producing so much meat also requires phenomenal consumption of foodstuffs that could have been used to feed human beings.

More than a third of global cereal production and around 94% of soy is grown for animal feed, and animals produce much less edible product than they consume. Research shows that one kilogram of edible beef requires 20 kilograms of animal feed. For pigs, the figure is over seven kilograms of feed, and for chickens, more than four kilograms. Experts estimate that, if everyone in the world ate a high-meat diet, an extra two or three planets similar to the earth would be needed just to produce enough animal feed.

Similarly, producing a kilogram of beef requires nearly 12 times as much water (15,500 litres) as the amount used to produce a kilogram of wheat (1,300 litres).

“If the population on earth turned vegetarian, our planet could easily feed 10 billion people,”

says Dr Yu, who did a decade of research in China before he founded Vegan Hut.

As China struggles to meet the increased demand for meat, over-grazing is turning grasslands into virtual deserts in the northwest. “More and more pigs and poultry in China are now being reared in industrial ‘factory farms’,” says D’Silva. “Thousands of animals are crowded together there, producing huge volumes of waste. This kind of concentrated livestock production is a major cause of environmental pollution, habitat damage and biodiversity loss.”

“Leading figures in China’s business and entertainment world can set examples to their fellow-citizens by reducing their consumption of meat,” says D’Silva.

“Reducing meat consumption will not automatically bring about a more sustainable and harmonious society, but it will contribute towards that goal.” 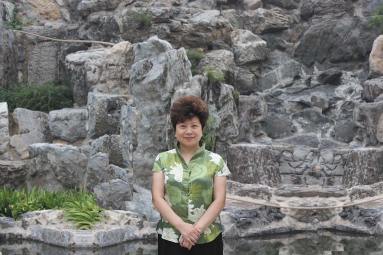 The name Liao Sha is familiar to Chinese people young and old, as well as those foreigners who like Chinese folk songs. She and her husband Ye Mao had classic hits like Liu Yang River and Bright Sunny Autumn Day. In the last 16 years, Sha has gone from being the proprietor of a tiny 300 square metre restaurant, to be the founder of Harmony Group which owns the Jin Sha Yuan food  chain, My Family Home Culture Theme Restaurant, Qian Ling Shan service training center and Jin Shan Yuan organic garden. And her thirst for new vegetarian inspirations is endless. Last year she delegated her business affairs to an associate and took a trip across Greater China and Malaysia in search of new recipes.

“I spent one month visiting vegetarian restaurants in Guangdong, Guangxi, Hubei and Hong Kong,” says Sha “In 2008 I started to study Confucius concepts such as Ren (which means benevolence and empathy). I was deeply touched by the Confucian texts that say we should extend our love to other living things.   So my initial motivation in becoming a vegetarian was to prevent animals from being killed. Then I realised that a vegetarian diet has other benefits, in terms of health and the environment.”

Sha’s My Family Home Culture Theme Restaurant reopened in 2010 as her first vegetarian restaurant, and then she went further – making all her other restaurants vegetarian.

“My staff complain that I have dropped the cash-cow of high-end meat dishes and the vegetarian dishes have not been very profitable yet, but I won’t give up”.

Sha’s next ambition is to find out a way to make vegetarian restaurants more profitable. “I believe I can make it happen,” she says.