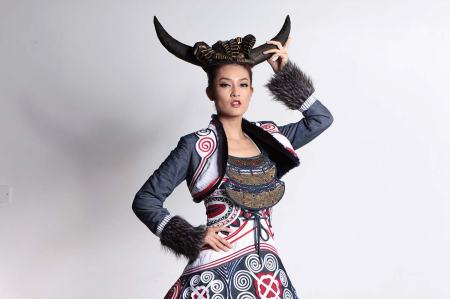 The Miao people of Central China have a rich tradition of handmade costumes that have inspired haute couture designers at Dior and Chanel, but despite the work’s beauty their culture is under threat.

When Miao girls are seven or eight years old they begin to learn embroidery skills from their mothers and start to craft the wedding dresses they will wear as young teenage brides. The Miao, who constitute an ethnic minority of some eight million people scattered through Yunnan, Hunan, Guizhou, Sichuan and Guanxi provinces, consider a young girl’s skill with embroidery as a good indicator of her prowess as a wife and mother.

“In the modern era the work of the Miao people is a great source of inspiration for designers,” says Shaun Cheung, senior lecturer in the HKDI’s Department of Fashion and Image Design.

“Their facility with colour in the dresses they make and their creativity with the silver pieces that are used in wedding jewellery all provide excellent ideas for designers.”

The first stage of the HKDI’s Miao project began with an idea for an exhibition of pieces made by Miao girls, to be displayed alongside Miao-inspired clothing designed by leading fashion practitioners in Asia.

The team of fifteen designers each crafted several pieces that infused the traditional Miao culture with contemporary touches, the designers seeking ways to retain the essential spirit of the Miao techniques while infusing them with a more carefree interpretation of femininity or using the structure of Miao garments to devise pieces with an enhanced sense of drama.

“Some of the Miao styles are like the most stunning pieces you see on the runways in Paris and Milan,” says Cheung. “The headdresses of the Long Horn Miao look like something that might have been designed by Alexander McQueen.”

A central part of HKDI’s mission was to delve deep into the Miao culture in search of sustainable design techniques. The design of Miao wedding dresses is part couture technique and part story-telling, for the Miao culture is rife with legends. The phoenix which plays a central role is a bird that lives for a thousand years before being reborn from fire and its own ashes. A famous Miao town in Western Hunan is Fenghuang, a word usually translated as phoenix, which is named after a 2,300-foot mountain peak to its north-west. 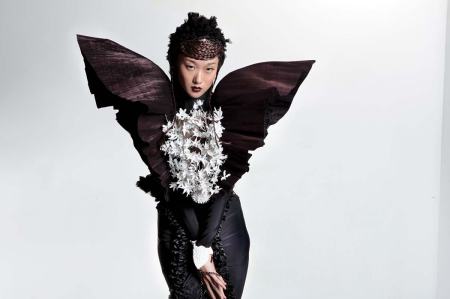 Long ago, so the legend says, a young peasant, exhausted from foraging for wood, fell to the ground to rest beneath a tree on the mountain’s slopes. As he slept he heard a beautiful voice, but when his eyes opened he saw nothing and believed the sound he had heard must have been no more than wind racing through the leaves.

His imagination enlivened by the graceful sound, he took a leaf from the tree, rolled it and played it like a flute, producing a pure, sweet sound. He did this for many days, and finally his perseverance was rewarded. He looked up and saw a phoenix in the tree above him. Days later he returned to the tree and again began to play with the leaf. On this occasion a beautiful woman appeared who said she had been the phoenix and was drawn to his music. The young man and the woman lived together thereafter and from then on the mountain was called Fenghuang.

Mozart’s The Magic Flute has a similar tone to that of the Fenghuang transformation and both hint at magic within the natural world that can be brought to life by those who have the right spirit. It is in this vein that Miao girls make their wedding dresses and silver jewellery, hoping with each needle stitch and  hammer blow they will endow the weave of their dress and the shape of their necklaces with the power of everlasting love.

“The Miao rituals and legends are beautiful,” says Cheung.

“And the way they work, with natural dyes and rugged fibres, often using flax, means that the clothes are environmentally sustainable and last for a long time.”

For Cheung and his fashion department colleagues this has been a crucial aspect of the Miao project. The fifteen designers were asked to do more than just mimic Miao design; their brief included the requirement that the designs draw on the sustainable elements of the Miao culture.

“If we can sustain these techniques we can sustain something important about humanity,” says Cheung. “They use natural dyes, the Miao live close to nature and co-exist with the seasons. For most of us in towns that’s now an alien way to live.”

The next phase of the Miao project will see the HKDI’s fashion department create a book that catalogues the culture’s heritage and includes accounts of how the fifteen designers came to create the pieces that were in the HKDI’s Miao Culture & Sustainable Design exhibition. Since that exhibition took place several of the designers have received commercial orders for their Miao inspired pieces, including some of the knitwear designed by Ika.

“The Miao have always used textile making as a language to record their history and beliefs,”

“The way they weave is an instrument of their vocabulary.” 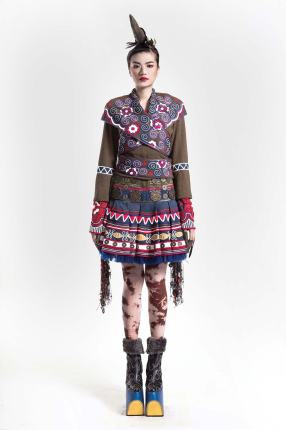 A MIAO
INSPIRED
DRESS BY IKA

Ika says she found herself rendered speechless with joy when she first began to explore the designs of the Miao.

“The colours invaded me like a powerful dream,” she says. “A thousand words would not be enough to express the beauty of Miao culture.”

Koyo William found himself having a similar experience and was carried along by the mythology and power of the Miao designs.

“The cross-over with the Miao aesthetic and the gothic rock vibe I use in Koyo Jeans has taken my designs to new heights,” he says.

“I can understand why designers who encounter the Miao culture are completely transformed by the experience. It’s almost like the Miao was the birthplace of haute couture.” 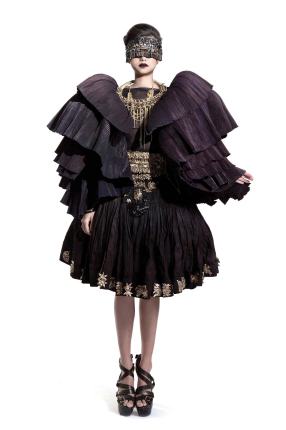 Although the pieces made by the Miao have a couture element, many of the Miao ethnic minority live in difficult circumstances with high levels of poverty. As such the fashion and image department see the Miao project as part of the HKDI’s commitment to value-driven design.

“By raising awareness of the Miao’s heritage we hope that more will be done to sustain their culture,” says Cheung. “We hope that centres of craftsmanship will grow in Miao areas and that this will help bring more Miao elements into contemporary collections while helping to support the magic and mythology of their heritage.”