Unveiling the secrets of oscar-winning make-up with Mark Coulier

Oscar-winning make-up artist Mark Coulier shares his treasure trove of experience and professional techniques with HKDI students, and talks to Summer Cao about a career creating wonders for the big screen. 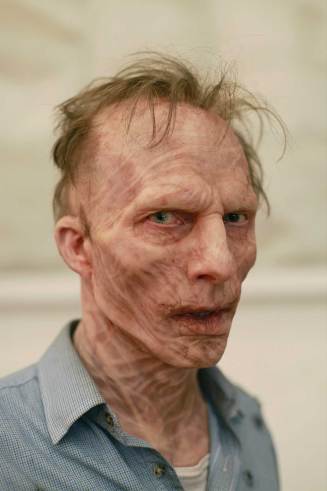 Michael Jenn made up as a zombie for World War Z

The Lord Voldemort character in J.K. Rowling’s Harry Potter series of novels is probably one of the best-known anti-heroes in fiction, largely thanks to the blockbuster movie adaptations. “He-Who-Must-Not-Be-Named” haunts the plot throughout the series of novels but remains elusive until the fourth installment, Harry Potter and the Goblet of Fire, in which he regains his body and finally shows his “real” face. And this is where our story begins.In Rowling’s words, Voldemort has “snake-like eyes and nostrils”. These horrifying features are sure signs of a nefarious character, yet they also leave space for the reader’s imagination. When the Dark Lord emerged from the confinements of the page and appeared on the big screen in 2005, his appearance lived up to fans’ expectations, thanks to the magic of make-up artist Mark Coulier.

Working closely with the author, movie director Mike Newell and veteran actor Ralph Fiennes who played Voldemort, Coulier decided to give the villain protruding brows, with no eyebrows, emaciated cheeks, a bald scalp and a network of veins on bloodless skin. The sinister make up took Coulier and his team two hours to complete, and was achieved with a little help from gelatin and a painter’s skilled hands.

More importantly, Coulier contributed to the crucial decision to digitally remove Voldemort’s nose. “There was a huge debate about whether Ralph Fiennes should keep his human nose,” Coulier says. “My opinion was always that he should lose it, because Voldemort should be a freak. He shouldn’t be able to walk around in public where people could recognise him.”

“When Ralph Fiennes started on the film, he was not sure either. When everybody had left the room, he asked my opinion, which I think did have an effect on the final decision.”

“A make-up artist has to work their ideas into conversations with directors and point them toward the outcome he wants. Maybe you’re completely wrong, and then you have to find another way to express their vision.”

Having created visual effects for a range of hit films like the Harry Potter series, Coulier produced his technical masterpiece for the movie The Iron Lady, a biopic about Margaret Thatcher starring Meryl Streep. In 2011, outshining his previous supervisor who had worked on Harry Potter and the Deathly Hallows: Part 2, Coulier won the Academy Award for Best Makeup for The Iron Lady with J. Roy Helland.

“Standing on the stage and receiving the Oscar was the most gratifying moment of my career,” says Coulier. “I’m proud because we did get pretty close to matching Thatcher as far as possible, without making the look too rubbery or precise – I just wanted it to look real. And I think we achieved that.”

Meryl Streep as Margaret Thatcher in The Iron Lady

However, glamorous moments such as holding an Oscar aloft and having celebrities hail your name is nothing, compared to the impact it has upon the winner’s career.

“Before I won the Oscar, nobody knew who I was, even though I had been doing this for 25 years,” Coulier says.

“I could have struggled on unnoticed for the rest of my life. So, over the years, I had to build up a network and always found my jobs on recommendation. The Oscar changed my stature in the film industry and I don’t need to chase after work like I did in the past.”

With this in mind, Coulier recommends people who want to try their hand in the industry to be well prepared for the exhausting reality. He believes that passion and hard work are two major elements which can enable one to transform the drudgery of film-making into a fun-laden experience.

“It’s getting increasingly difficult to get into this industry because the knowhow has become so accessible – and there are more people trying to do it,” Coulier reveals. “I receive 30 to 40 enquiries every week. Unless they send me some good photographs of their work, they will never get a job or become a trainee. I won’t even have a guy sweeping the floor unless they’re really interested in getting into the industry.” 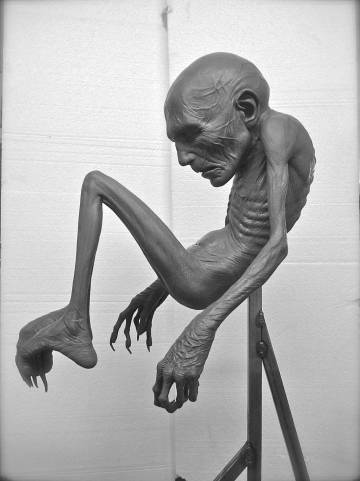 A sculpture of Voldemort as a baby made by Mark Coulier

Coulier himself had a passion for creating models and other objects at an early age. Instead of being intimidated by the horror movies he saw with his father, he was fascinated by the scary make-up worn by the actors. Since then, the seeds of a career in the film industry were sown. “People spend most of their time at work,” says Coulier. “It’s important to do something you’re passionate about.”

Talented and creative, Coulier entered the London College of Art, studying illustration. However, when he graduated, his flair for make-up and passion for movies pushed him into the film industry. The final nudge came from the movie The Godfather, in which Dick Smith, “The Godfather of Make-Up” created an impressive jowl for Marlon Brando, who starred in the film as Don Corleone.

“I was fascinated by the amount of work done on Marlon Brando,” says Coulier. “It’s still one of my favourite make-ups today. It’s beautifully done, totally real. It really did age Brando about 20 years without using any prosthetics. All that was done to his face was dental plumper to fatten his face shape.”

When Coulier started his career as a make-up artist, he was immediately obsessed with creating things from bits and pieces. He seems to have added a twist to the old saying “practice makes perfect” by proving that “obsession makes better still.”

For example, Coulier spent three months making a big blue creature that only flashed across a Star Wars episode for five seconds or less. He made full-size Centaurs, half-human half-horse creatures, with floppy hair and painted details just as a lighting reference for a Harry Potter movie.

When he created the famous scene that shows the inflation of the unpleasant Aunt Marge in the film adaptation of Harry Potter and the Prisoner of Azkaban, he spent six months studying the human body’s reaction to being filled with air, making sure every part of the character grew proportionately. He even devised an electric air-pump for rubber gloves that could inflate the fingers in the order the director preferred. “That was the most technically complicated make-up I have ever done,” Coulier recollects.

Although the machine was not used in the end, and the six-months’ work by Coulier and the other 20 or so members of his make-up team is only shown on screen for three minutes, he regards the whole process as a precious experience because he truly enjoyed it. However, he admits that seeing his finished work on screen is also of prime importance.

“I guess people who are creative in the commercial world are generally needy in terms of others’ feedback,” says Coulier.

“I would consider true artists as those who get satisfaction just from doing their job, without the need for anyone else to see their work. But that’s not me. For me, art is what you create for yourself and for other people, and it ultimately has to be seen.”

Coulier’s work is definitely regarded with admiration, respect and sometimes surprise, not only by the audience, but also by experienced actors and directors who use make-up on a regular basis.

“I made Tilda Swinton look 85 years old last year for a film she did with Duncan Jarman,” Coulier recollects of an occasion when he used prosthetics to create a very natural look. “After studying Tilda’s face, the actor Jeff Goldblum – who is very familiar with prosthetics – said ‘When did prosthetics get this good in real life?’ which was a very nice little comment.”

“When we were doing Rush, which included a very tight close-up on Daniel Brühl’s blood-smeared eye, director Ron Howard came over and said ‘Mark, I have been doing this for a long time and I’m familiar with prosthetics. These are really the best edges I’ve seen – I can’t see where it’s blended with the skin.” 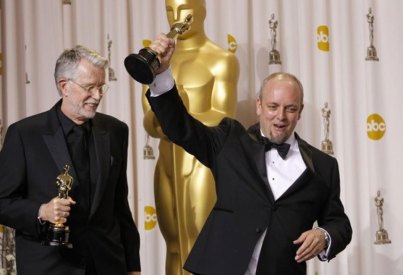 Mark Coulier and J. Roy Helland winning the Oscar for The Iron Lady

Coulier’s widely acclaimed reputation is built on years of experience, which is meticulously stored on his computer. “I have a database in Microsoft Outlook that contains all my snippets of information,” says Coulier. “As you go along with your career, you have to always keep an eye on what other people are doing. You have to be a sponge.”

“Recently, I was sticking a beard on for a film. I was asking people what glue they use to swim in water with beards and have waves crash over them, and questions like ‘what if we lose it in the water and how many duplicates do we need to have’ – little snippets of information. I always ask other people what they use, especially when they’ve done a really nice piece of make-up.”

Coulier also uses his talent for observation as a way of developing source images for his work. To ensure that his aging make-up is as natural as possible, he behaves like a paparazzi, carrying a long lens camera and secretively taking pictures of those with aged skins. He revealed that the inspiration of his Oscar-winning make-up for Meryl Streep came from an old lady on a London bus.

Coulier also draws from the natural world to identify contrasting colours that work together, whether they come from a beautiful sunset, a dangerous reptile or even flies and cockroaches. All these inspirations are painstakingly and meticulously added to his Outlook file, like a wizard storing up spells for his next battle with the restrictive forces of reality. Coulier’s conjuring tricks with the human face prove beyond doubt that, even though film can create some extraordinary effects, without the astonishing work of make-up artists, the effects would be mere sleight of hand rather than genuine magic.