The work reviews forty-one designer brands and reveals that Europe’s “savoir-faire imperialism” in Asia is fast coming to an end. Here the book’s author Gemma Williams offers a sneak preview of a future in which home grown couturiers will threaten to capture the dragon’s share of the world’s largest retail market. 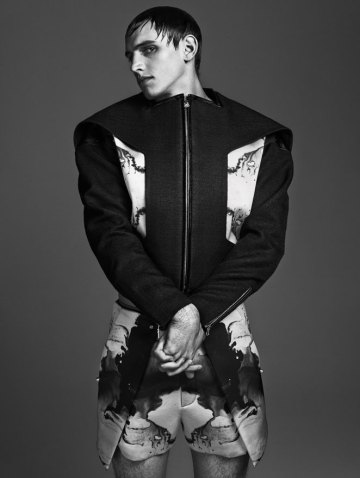 The economic boom in China has afforded young design creatives the chance to choose a career as a fashion designer and the freedom to start up their own labels. This is transforming the fashion market in China, especially as Chinese consumers turn their backs on branded fashion and look for clothes that give them more room to explore and express their individuality.

China is currently undergoing unprecedented and rapid change, and this is particularly evident in the fashion industry, and most notably, it’s emerging designer scene.

“Emerging design” is a complex term to define, however it can apply to brands and designers in business for a limited number of years, usually 10 and under and/or with limited financial resources. What is particularly revealing about emerging design is how it represents and frames a certain epoch in time.

What this means for the consumer is an exciting and dynamic market, because independent design is often a truly unique flight of fancy, an unrestrained experiment in craftsmanship, and due to economies of scale, very often this means a one-off piece or garment.

This transformation of the Chinese fashion scene is not limited to first tier cities such as Shanghai and Beijing, it is happening all over the country. Hotbeds of talent are creating a firestorm or innovation in Xiamen, Shenzhen and Guangzhou.

As well as its geographical reach, this change is also taking place on the physical and metaphysical levels. The growing synergy between China and the rest of the world is facilitating this shift, as increasing numbers of Chinese students travel abroad to study.

With established fashion and design universities in Europe and North America now acting as key destinations for many of these scholars, the direct effects are being visibly felt in the fashion industry. Even a decade ago no one could have predicted the explosion in indigenous homegrown fashion talent. However, more than this, Chinese minds are now opening up to this global exchange and embracing the exciting medium of fashion as a means of personal expression. And, as a brand new China emerges, what better way to present your self than swathed in the cutting edge work of homegrown talent? 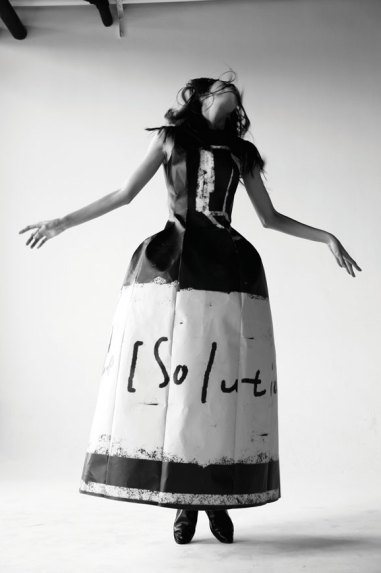 One brand leading the way in emerging fashion narratives is Digest Design, the brainchild of Dooling J. More like a multi-disciplinary art project than a fashion label, Digest Design is a perfect example of the unique parameters under which independent design can operate.

A graduate of London’s Central Saint Martins College of Art and Design, Dooling returned to China and in 2008 and started her brand in Beijing. Independent multi-brand retailer, Tripple Major has picked up Dooling’s flat design aesthetic, which often incorporates oddities such as the detachable artworks that featured in a recent collection.

By producing two lines, a commercial Ready-to-Wear line and a more challenging non-commercial line, Digest Design manages to mediate the contemporary challenges facing unconventional designers. Despite choosing to maintain a low profile, the brand is now attracting worldwide attention and was recently selected to feature in the exhibition The Future of Fashion is Now at Museum Boijmans in Rotterdam.

Suen studied Visual Design, and did not receive any formal training in fashion. He prefers to draw on his life experience when designing. He is fast becoming known for great fabrication, which he believes must carry the design as well as create the effect. Following in the footsteps of established designers like Zander Xhou, the brand offers avant-garde separates for the more daring male consumer in China. And now, with his eyes on the international market, he is hoping to present at the “London Collection: Mens’ Autumn Winter 2016” programme in collaboration with GQ China.

Excitingly, it is not only the local Chinese designers who are working to define the outlook of contemporary design. China is also attracting young creatives, offering a dynamic and exciting base for those in search of something different. 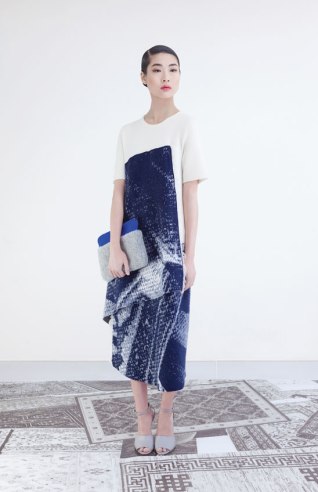 FFixxed Studios, Fiona Lau and Kain Pickering, left Melbourne and set up base in the Wutong Village at the foot of the Wutong Mountain in one of China’s newest cities, Shenzhen. With a stronghold in the art world, Pickering is himself a practicing artist, and they are certainly not the average fashion brand. Compelling concepts underlie their relaxed unisex style, which has not gone unnoticed by the international fashion industry. They were recently selected as finalists for the International Woolmark Prize competition, part of which involved presenting a collection during Milan Fashion Week. Speaking about the attraction of Shenzhen, Pickering explained that ‘As a city it feels a little bit like a blank slate in a way, an unchartered cultural identity, which as a designer can be quit liberating. There is a feeling that you can do anything here’. While there are undoubtedly challenges for young designers, this sentiment seems to sum up the fashion industry in China: Anything and everything is possible.

Chinese designers are also choosing to start brands outside of the Mainland, and London seems to be a top destination. Recent London College of Fashion graduate and emerging designer, Renli Su has chosen London as a base for her eponymous fashion brand. Born in Quanzhou, Su moved to Beijing and studied for a BA in Fashion Design at the Central Academy of Fine Arts, China.

During her Masters in London Su began to investigate sustainability in fashion. Since then she has expressed her exasperation with fast fashion, an opinion which Chinese consumers are also slowly beginning to embrace. Instead her brand focuses on producing handcrafted separates and intricate accessories from intensely sourced fabrics and materials ranging from Irish linen to organic cottons not often used for garments. Her aesthetic direction combines and fuses obtuse references and minority cultures to present a subdued yet unique insight and entry point into contemporary Chinese design. 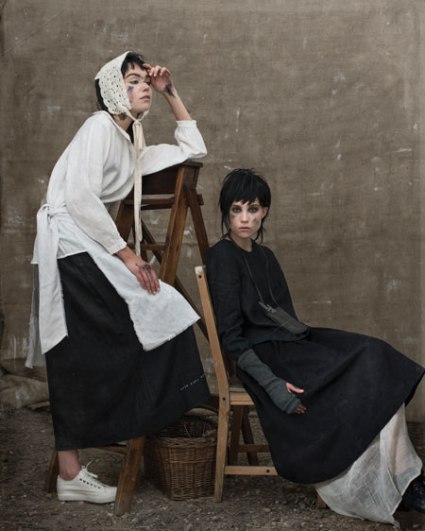 At the opposite end of the aesthetic spectrum is Shenzhen-based Angel Chan, who’s maximal and dramatic designs have the stamp of London’s Central Saint Martin’s. Only starting her label in 2014, she is a testimony to the speed of the industry on the Mainland. Her colourful graduate ‘Wedding’ collection served as the foundation for her first full collection which, along with Renli Su’s Spring Summer 2015 collection, premiered at Shanghai Fashion Week, hosted by Chinese retailer, Dong Liang. Specialising in supporting and promoting independent domestic labels and designers, Dong Liang stocks multiple emerging designers and their one-day take-over of the SS2015 Shanghai Fashion Week schedule brought independent and emerging designers on to the catwalks.

While the Chinese fashion scene in its entirety can be considered emerging, Fashion China, to be published by Thames & Hudson in March 2015, details the breathless developments within the contemporary fashion industry. Including some of the designers mentioned here to more established, couture and commercial brands, the book’s curated selection is the first of its kind to capture the dynamic kaleidoscopic panorama of the industry as it currently stands.

Speaking with over three dozen Chinese fashion designers there was a clear sense that they felt their time had come and that Europe’s creativity was in retreat, swallowed up by corporate conformity and unable to answer the avalanche of new ideas emanating from Asia. There’s no doubt that Europe’s hegemony over the fashion world is at an end. In the years ahead the king and queens of fashion may well be found on the Dragon Throne. By Gemma Williams.