Despite being seen as a conservative country, China enjoys a profound culture of eroticism with a long history of more than 2,000 years. The Fashionable Truth rediscovered the mysterious kingdom’s sensual legacy, under the guidance of a world-famous collector. 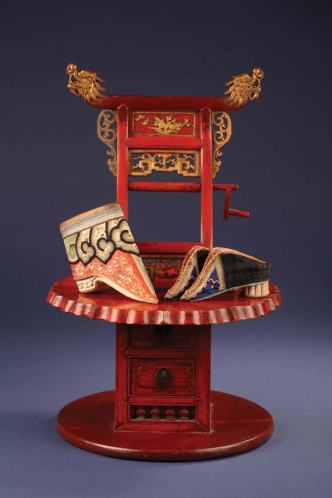 China’s magnificent culture has given the country a great reputation in all forms of art. Poems, paintings, porcelain, calligraphy and sculpture have all been used to reflect on social issues, depict beautiful landscapes, record significant events and express sentimental feelings.

This spring, Sotheby’s Hong Kong Gallery unveiled another perspective on China’s cultural heritage, displaying work that tells extraordinary stories of sex and eroticism in the country’s ancient past.

Visitors were able to stroll among silk paintings of an intimate couple enjoying pre-coital bliss in a flowering garden, view phalluses in different sizes and materials and discover the wooden chairs used for “foot-binding” and silk “golden lotus” shoes. The erotica was in an impressive range of materials, including paintings, porcelains, ivory and woodcarvings.

“There were two ladies in the shop, who giggled and kept saying ‘shall we show him or not’. And finally they opened a cupboard and pulled out the most beautiful album I’d ever seen in my life,” Bertholet said, whispering as if he was revealing a long lost secret.

Although he didn’t have enough money with him to purchase the album, he still bargained on the price, and promised to buy it upon his next trip to Hong Kong. Six months later, he returned and the album was his, along with what became a life-long passion for Chinese erotica.

Brought up in Netherlands, Bertholet developed a keen interest in Chinese culture, especially Chinese paintings, at a very young age. “The tranquil villages, the beautiful mountains, all were so attractive to me,” Bertholet says. 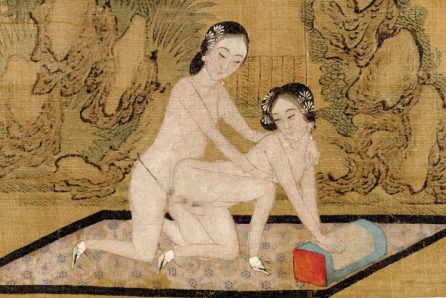 A panel from a scroll with 20 scenes of lesbian sex

The interest gradually transformed into a passion for collecting unusual work. He describes acquiring art as “bringing poetry into your surroundings”. He says this poetic factor has been diminished in modern times, when people are continually occupied with high-tech products and electronics.

“When people are walking on streets, they are all like this,” he says, staring down at an imaginary cell phone screen. “They don’t see the sky, they don’t see their surroundings and they just keep talking (on the cell phone) all the time.”

Bertholet takes a different approach. He says he prefers to seize every moment to appreciate the beauty that art offers, as “ancient artworks give me some kind of comfort. It’s like escapism.” 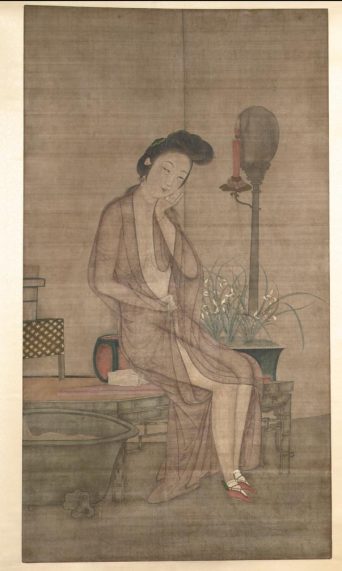 In addition, the pieces provide a better understanding of Chinese culture through a faithful and authentic representation of social customs and lifestyle in ancient times.

In ancient China, lovemaking was considered as a natural practice, a sacred duty for both men and women. One of the strongest pieces of evidence for this view can be found in a famous quote of Confucius from The Book of Rites, “the things which men greatly desire are comprehended in meat and drink and sexual pleasure.” Gaozi, another renowned ancient philosopher also said in The Works of Mencius that, “by nature, we desire food and sex.”

As it turns out, ancient China’s attitude toward sex was more liberal and open than had previously been imagined. Homoerotic love was prevalent, as shown in the paintings of upper class sybarites having sex with both men and women. In a polygamous society, tantalising phalluses in different sizes and materials suggest the importance of self-pleasure for lonely females forced to wait their turn in a harem setting.

Moreover, the fact that the garden is the most common venue for lovemaking in those paintings reflects the Taoism pursuit of harmony between mankind and nature.

“If you look at western pornographies, you will find no story, no romance, no sensitivity nor philosophical background. It’s just empty and lost,” says Bertholet.

To him, a Chinese erotic painting brings a more delightful and sensational story with great details and suggestive symbols, as shown in the piece Love Games in a Flowering Garden from the Gardens of Pleasure Series in his exhibition. In this painting a couple are entwined with passion in a garden where peonies and magnolias are in bloom, but as these two flowers blossom in different seasons there is a suggestion that the two lovers are in an illegitimate relationship, although other interpretations are possible. The magnolias are blooming near longevity stones, which together make a symbol of long life and happiness.  Part of the pleasure in looking at these expressive narrative paintings is to decipher their meanings, many centuries after the artist committed his sensual strokes of ink and pen to paper. 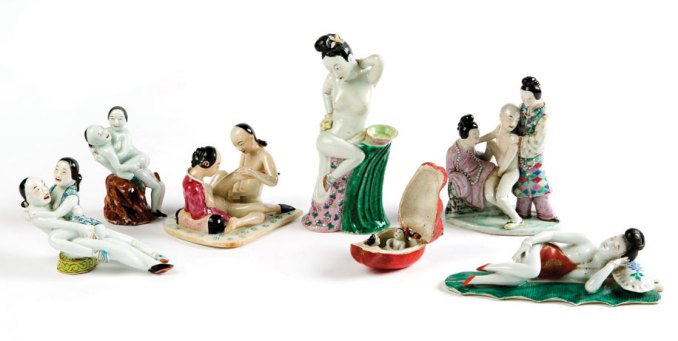 Nowadays sexual taboos are loosening again in China, with the young generation adopting more open attitudes toward sex against a background of Internet erotica and the emergence of sex museums and exhibitions. However, most of these exhibits lack aesthetic values and cultural significance. Bertholet would like to see his collection visit the Mainland in the future and he has already had an invitation from the mayor of Hangzhou, which he turned down for fear that some of his peices might be confiscated by the authorities, which still harbour puritanical attitudes.

Should Bertholet overcome his fears his exhibition would provide an invaluable opportunity for people to reconnect with their ancestors and to experience an enchanting journey back to the mysterious pleasures of a lost and ancient Kingdom. By Libby Zeng