A traveler must sometimes follow her intuition to find a unique destination where guests are rewarded with something subtle, beautiful, and true. These places occasionally feature in guidebooks, but mostly they do not and discovering them often requires a wrong turn and a willingness to answer the Siren call of a beguiling light on the horizon.

Khao San Road in Bangkok is not a place of undiscovered mysteries. Every other storefront offers massages for 200HK$. Food stands line the road. At one, piles of noodles become Pad Thai flecked with green onion, while pyramids of spring rolls adorn the next. Less fortunate merchants traipse through crowds to hawk woven thread bracelets. Bars sell cocktails to go. Everything is bright, gaudy, and obvious.

Sihanoukville, Cambodia, once an undeveloped fishing village on the southern coast, offers much the same experience. Commercialism is king along Southeast Asia’s “banana pancake trail” (a favorite euphemism for popular backpacker routes in the region) but it was a wrong turn here that led to a ramshackle jetty, a two-hour boat ride and then to the nearly-deserted 73-km2 island Koh Rong Island, where a two week stay barely seemed enough.

Koh Rong has just begun to develop. A few tumble down guesthouses dot the Southeastern shoreline. With a 99-year lease by The Royal Group and plans to make Koh Rong “Asia’s first environmentally-planned resort island”, its fate may differ from its brash and gaudy cousins. Or perhaps in 10 years, this place will also succumb to neon lights and overloud music.

But not yet. Here, it’s the plankton that provide the bright lights as their phosphorescence illuminates the naked bodies of night swimmers.

At Koh Rong power-lines and roads do not clutter the vistas of turquoise water and white sand. 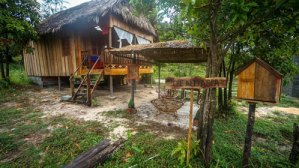 A rustic villa on Koh Rong

Boats bring ice and other supplies daily, and guest houses run on generators. Solar-powered bungalows, treehouses and, for the luxury traveler, the ultra-exclusive Song Saa resort offer accommodations. Here, one can still find 43 kilometers of pristine beaches and massage parlours do not proliferate.

A 45 minute hike through the jungle brings the intrepid visitor to “Seven-Kilometer Beach.” A shorter, more leisurely boat ride ends at the same spot. A half-walk, half-run along the jungle trail every morning proved to be the perfect way to start the day. A steep scramble up from the shore passes through a cluster of local dwellings, before penetrating into the undeveloped interior of the island. The trek finishes with an equally steep climb back to shore, assisted by sturdy vines, and opens up to a perfect gradation from blinding white to the clearest possible aquamarine.

“The other side,” of Koh Rong Island is a revelation. Here, the world maps of old would have shown a dragon, signifying the unknown. Mermaids might still dine on sunlight here, draped in sunken treasure. Those willing to venture beyond roads and power lines, through jungles and across oceans, will reap their reward. 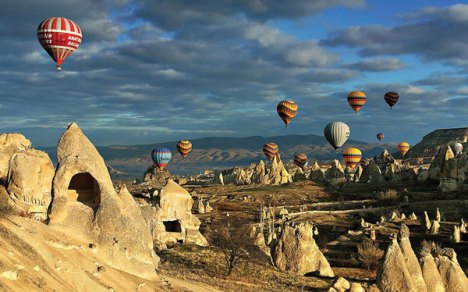 From Cambodia to Turkey, some things don’t change. In Istanbul, there are entire streets of shops selling dried apricots and dates that ooze honey, toothsome Turkish Delight, and an impossible variety of baklava. Insistent merchants beckon with promises of tea and samples.

But just a twelve-hour bus ride (or a much shorter plane ride) east into Central Anatolia lies Neveshir, the main province of Cappadocia, and the gateway to another world entirely.

This improbable landscape of volcanic plateaus and canyons, “fairy chimneys” (decidedly phallic rock formations), natural caves and underground cities sheltered early Christians fleeing from Roman persecution. It lies at an altitude of 1000 meters, and is loosely bounded by the Taurus Mountains to the South, Galatia to the North, the upper Euphrates to the East, and the Black Sea coastal ranges to the West—enclosing an area approximately 400 by 250 kilometers.

Three days in this fairytale world in spring offered the chance to walk endlessly through canyons and follow vague paths that diverge from the main roads around the towns of Ürgüp and Gorëme. The dust seeps into everybody’s pores, and Turkish Baths seem the only way to restore some semblance of cleanliness. A clear sky stretches above the plateaus, punctuated occasionally by brightly colored hot air balloons.

There are several “open-air museums” in Cappadocia, which cleverly charge admission to visit the exact same features as can be found outside their walls. They enclose only a tiny portion of the landscape, while the space beyond feels boundless. In this place, one might enjoy the distinct sensation of having stepped into a science fiction movie, in which the earth’s population has been rendered as denuded rock. The roles of explorer, archaeologist, and nomad seem not only plausible, but compulsory. The explorer wanders in and out of caves at will; the archaeologist follows narrow staircases into the haunting remains of a hidden church; the nomad wanders on and on, feet coated in yellow-brown dust. 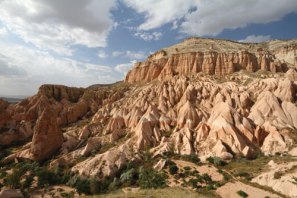 The churches, especially, are heavy with secrets. The story of a people who flourished in spite of oppression echoes in the columns and arches carved deep within the earth, in the walls worn smooth by the brush of fingertips, and in the remnants of hallowed sculptures. Here, ghosts might still roam freely, guarding millennia of history buried in the rock.

In April, a profusion of dandelions adds a splash of color to the sandy monochrome; the cheerful flowers suggest the resurgence of vitality that has followed tourists to the region. But beyond the town centers, the museums, and the hot air balloon landing sites—under the wide-open sky—the enigmas of this place unravel and reveal themselves.

Likewise, Palermo, Sicily offers layers of meaning and discovery to those who look. Founded in 734 B.C. by the Phoenicians, the city has belonged, in turns, to nearly every ruling power since—Carthage, the Roman Empire, Byzantium, the Arab Emirate of Sicily, and of course modern-day Italy. Its cuisine matches its history in diversity: crisp arancini (cones of risotto filled with mozzarella and prosciutto, or ragù, and fried), granità (a cross between gelato and crushed ice, flavored with local foods like almond and pistachio), and fresh frutti di mare (seafood prepared with a medley of Mediterranean seasoning).

Palermo’s magic hums in the crumbling interiors of courtyards, beneath the flat stones paving labyrinthine alleys, and atop the slight scent of decay pervading the city. Piazzas lined by bars and restaurants fill with students as dusk falls. Piercings and dreadlocks make frequent appearances. In June, the balmy summer air carries a memory of fresh-caught fish, salt water and aging stone walls. 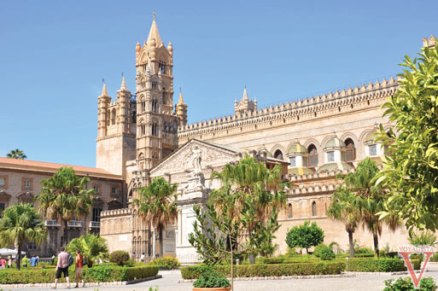 Maybe Palermo weaves into its spell its singular history, or the Southerness of its inhabitants, somehow so distinctive, or the dense, dark reality of its volcanic earth and stone. The Tyrrhenian Sea laps insistently, rhythmically, hypnotically against the city’s edges.

Here, perhaps, the Roman gods of beauty and truth still hold sway. Here are visible relics of the mythic Odyssey.

Beauty does not equal perfection, however, and Palermo stands in testimony to that fact. One walks alone at night not entirely sure of one’s security. Blood is visible in the gleaming piles of fish at market. The city does not dazzle in the manner of other Italian metropolises—its architecture less ornate, its streets a bit dirtier; rather, it invites the visitor to notice, of course, what is less obvious. The corners and courtyards, doorways and alleys, for all their dust and decay, hold an undeniable beauty. There are shadows at midday.

I spend just two days in Palermo before continuing on to the Southern, “African” part of the island. While there, an invisible voice guides my explorations of the city. “This way,” it calls; “Over there,” it urges. This is the voice of intuition. Every traveler has heard it. It leads not to the most popular places, but to the most true—a changeable and individual distinction.

When the curtain of jungle vines parts to reveal the clearest tropical sunlight, the revelation is highly personal. When a traveler strays from the road, she only sees her unique path when she looks behind her. When the invisible voice of intuition calls so alluringly from just around the corner, just beyond the horizon, it promises a different delight to every voyager, as the Sirens did.

Answering the call, however, will not lead to a watery death, but rather to the hidden places where mermaids still dine and ghosts roam, where truth and beauty reign and where stone, sun and earth are a revelation. By Toby Israel