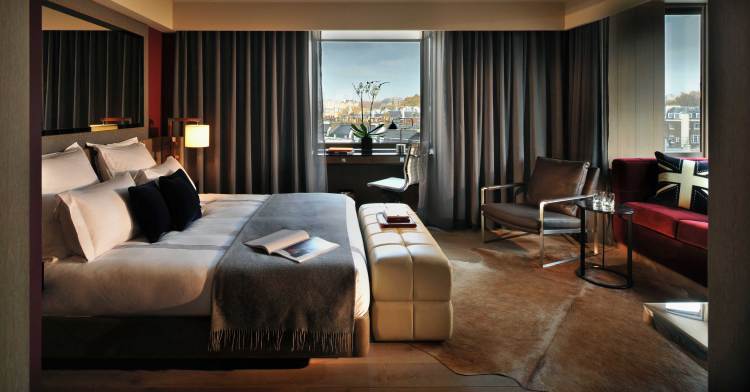 Waking up in the heart of London’s Belgravia after a nap that began on a cold winter’s afternoon, I thought aliens had arrived. From one of my large picture windows in the Studio Suite at the Hari Hotel I could see multiple arrays of brightly coloured lights spinning and flashing on the darkening horizon. The other window, equally panoramic, opened onto a dusky array of buildings that were punctuated by a circle of bright red orbs. It looked like a Star Wars battle cruiser was docking on the Thames. A fantasy, yes, but then staying at The Hari on Chesham Place is also a kind of dream.

First, the space. The Studio Suite on the eighth floor has large double aspect windows that will get anybody’s heart beating faster. Those dazzling lights? They belong to the winter funfair in Hyde Park. The alien cruiser? That’s the London Eye across from the Houses of Parliament. One of the large windows has a bay that houses a desk and a Nespresso machine. For a writer – and with social media we’re all story tellers now – this is the perfect combination. An elegant space for a laptop, strong coffee and inspiring vistas that include the dome of Harrod’s. You don’t even need Photoshop or other reality bending Apps to make your selfies look gorgeous. The second bay window has a built-in day bed/sofa that’s a perfect place to lounge with a good book or (it’s 2017 after all) a Netflix binge. 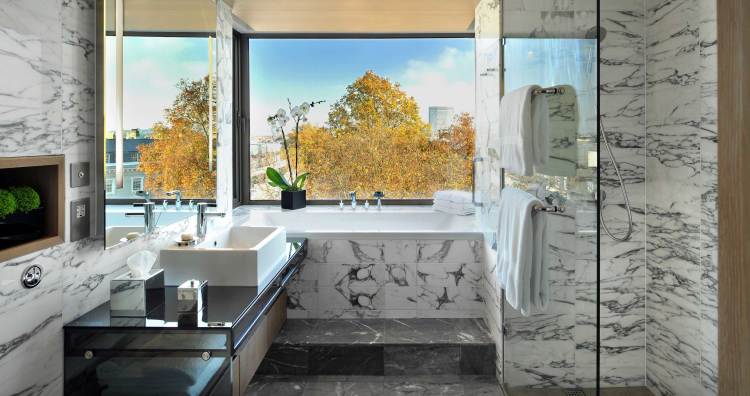 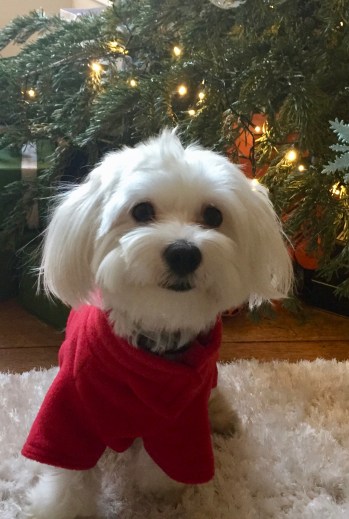 And we are not finished with windows. Step into the marble bathroom and there’s a giant shower space, mirrors and pretty sink plus a large step up pedestal bath where one can soak indulgently, sip cold Moet champagne and look out over London. It ranks among the best baths with a view that I have encountered in a hotel.

The bed is a sumptuous king and closets are ample and big enough to house far more than my short stay bags and Louis’s travel case. Oh yes, Louis. He’s my 9 month old Bichon Maltese and he was made to feel exceptionally welcome. Housekeeping had provided a soft and warm red doggy bed (that matched his seasonal coat), a sparkling clean water container and a hygienic plastic feed bowl. They also gave him a toy to play with and showered him with joyful adoration whenever I walked him through the lobby en route to Sloane Street (Dior, Chanel, Dolce, Vivier et al), Brompton Road (Harrod’s) and Knightsbridge (Harvey Nicholls).

So much for the hardware. It’s the software – also known as human beings – that truly make the Hari a memorable place to stay. What do I look for in a hotel’s team? They need to know my name, my special needs and do more than expected when I need something in a hurry. The Hari does all this without the bat of the eye, but so much more. They got to know me and Louis, they anticipated what I might want and graced my stay with the feeling that I had found a home away from home. There are few other hotels that do this. One of them is another of my all-time favourites, Claridge’s and it’s no surprise to discover that the guest relations manager here was trained at this Mayfair institution and has brought much of its superlative DNA to The Hari, while adding her own unique twists, as is appropriate for a boutique hotel where everything has to be kept intimate and personal.

The term “boutique” has become overused in the hotel industry but at The Hari it fits bill. It’s chic and elegant with provocative and sensual art in all the right places, but it’s also cosy and feels like a place where you can kick off your Loebs, Guccis or Viviers and enjoy a hot chocolate with your feet up.

The Hari’s charm is built out of a rich heritage. It’s one of a global portfolio of hotels owned by the Harilela Group, founded in Hong Kong by Dr. Hari Harilela in 1959, whose son Aron purchased the Hari property in 1997, his first acquisition for the Group. The Hari opened in 2016 as the first hotel to bear a name so intimately associated with the family’s history and as the first property to be brought under the umbrella of Aron Harilela’s own brand.

I have played polo with Aron Harilela in Mongolia and enjoyed whisky evenings with him, his family and friends in Hong Kong. I know how passionate he is about his sport and the people close to him and it’s this energy and desire that’s apparent in the design and operation of the Hari. You can feel it’s a hotel with an owner who cares deeply and wants to win the accolades of the public while making all his guests feel like they have entered a circle of intimacy. It’s the hotel of a deeply competitive and caring man. 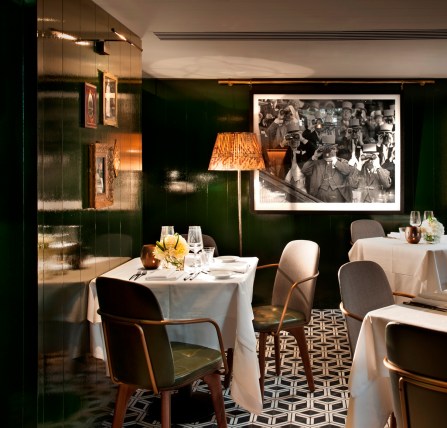 And so, to dine. There are dozens of fine eateries within strolling distance of The Hari but on a cold night after a busy day there’s also the fine Italian restaurant within the hotel, Il Pampero, named after Aron Harilela’s favourite horse. The food is well prepared with fine ingredients, thoughtful ingenuity and without some of the modern pretensions that make eating in some London restaurants feel like being asked to judge an especially exhausting episode of Professional MasterChef.

I have heard some guests criticise The Hari’s gym facilities for being too small and inadequately equipped, but the hotel seems to have chosen better ways to use its space for the bars and restaurant that attract a lively and cosmopolitan local crowd as well as the hotel’s guests. In any case, The Hari is set among some of London’s most interesting residential streets and Hyde Park is a short jog away. If somebody needs exercise they can always hit the pavements and the wide expanses of the park. Or they can take Louis for a walk – I enjoyed the Hari so much that I suspect me and my four-legged friend will, from now on, be in residence as often as we can.

Verdict: The Hari, Go. Trust me, you won’t want to leave.