Out in the New Territories lies a little known architectural gem. Designed by Frank Gehry and championed by some of Hong Kong’s most influential trailblazers, why is it that so few people know about Maggie’s Cancer Caring Centre and what is being done to change that?

Frank Gehry’s name is synonymous with some of the most iconic buildings in the world: the daring, titanium-clad Guggenheim Museum Bilbao; the lyrical, curvilinear Walt Disney Concert Hall in Los Angeles; and the rhythmic and expressive Opus Hong Kong perched atop the Peak. When Gehry’s name is uttered, one does not automatically think of Tuen Mun. One should.

The unassuming New Territories settlement is home to the second development in Hong Kong that bear’s Gehry’s name. One that undeservedly endures a lower profile than its multi-million dollar cousin. Situated just beyond the reach of long shadows cast by the imposing Tuen Mun Hospital, Maggie’s Cancer Caring Centre flies in the face of the former’s utilitarian architecture. From a distance, all that is visible is its distinctive red roof, true to Gehry’s form in both its metal cladding and its impression of articulation.

Upon closer inspection, the structure reveals its beauty. Clean and simple, it recalls the pavilions of traditional Chinese design re-imagined as only Gehry might. Surrounded by serene shallow pools, upon which concentric circles wander aimlessly, and vibrant landscaped gardens, the centre could not be more removed from its immediate surroundings.

First opened in 2013, this is exactly its purpose – to offer practical, emotional and social support to anyone living with or affected by cancer, outside of the standard hospital care received. The initiative to provide such services came from one woman, Maggie Keswick Jencks. 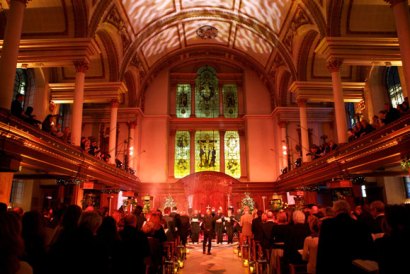 The Fayre of St James in London

Keswick Jencks was first diagnosed with cancer in 1988. In 1993 she learned that it had returned and was given only months to live. Not one willing to give up without a fight, she joined an advanced chemotherapy trail that extended her life for a further 18 months, and it was during this period that the concept of a cancer caring centre was conceived.

Despite not living long enough to see this become a reality, the first Maggie’s Cancer Caring Centre was opened in Edinburgh in November 1996. The original centre was designed by contemporary Scottish architect Richard Murphy, following Keswick Jencks and her husband Charles Jencks’ belief in the power of architecture to inspire and to soothe.

Following his wife’s death Jencks continued her legacy, recruiting some of the biggest names in architecture – including Zaha Hadid, Rem Koolhaas and, of course, Gehry – to design and create further centres. His argument is that for cancer patients, their immediate environment and architecture can make a difference to their wellbeing, psychologically or otherwise. By providing a space in which people feel not just comfortable but welcome to explore and perhaps understand their diagnosis, Maggie’s Cancer Caring Centres are offering an invaluable service that cannot otherwise be accessed.

The Hong Kong connection comes from time that Keswick Jencks spent in the former British colony and China as a child, when her father, Sir John Keswick, was working with Jardine Matheson. 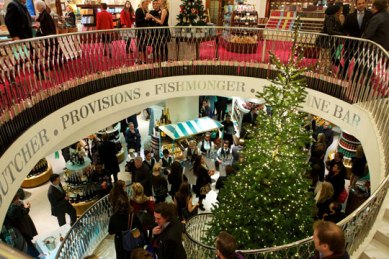 The Fayre of St James in London

Later, the two established the Keswick Foundation, and with it the territory’s first hospice for the terminally ill among other projects. In 2005 the Foundation approached Maggie’s Cancer Caring Centres in the UK to express their desire to establish a centre, a wish that was later granted.

Gehry’s involvement was not accidental. No stranger to Kewsick Jencks, who he had worked with on the Peter B. Lewis Building, nor to Maggie’s Cancer Caring Centres, or indeed to cancer on a personal level, Gehry designed the Hong Kong centre pro bono.

In his acceptance speech for the Pritzker Architecture Prize, Gehry described architecture as something that was able to make a difference to people. “To enlighten and to enrich the human experience, to penetrate the barriers of misunderstanding and provide a beautiful context for life’s drama.” And it is true that at Maggie’s Cancer Caring Centre Hong Kong, he has created a beautiful context where what Jencks has identified as the, “architectural placebo effect” might play out.

However, it is important to determine that there is more at work here than a placebo effect. Maggie’s Cancer Caring Centre is an oasis in a world of uncertainty, a retreat from everything else that is going on. The complex geometry of the roof translates into unexpectedly placed skylights that illuminate from above, flooding each and every space with natural light. Warm and welcoming, it offers everyone that enters both public and private areas in which they can interact or reflect as they so choose.

There might be an older gentleman practising calligraphy in the corner or a therapy session, yoga class or nutrition workshop underway. Whatever is going on, all are invited to join. In addition to these initiatives, creative writing, art and music workshops are arranged, as well as support groups and self-help courses run by clinical psychologists employed by the centre through donations it receives.

The cold hard fact of the matter is that all of these endeavours cost money and without visibility and funding, those living with cancer will not be able to continue to enjoy the invaluable support that Maggie’s Cancer Caring Centre offers. Enter Quintessentially Lifestyle, who are organising what promises to be the party of the festive season, The Fayre of St John’s, in support of Maggie’s Cancer Caring Centres.

“I have known of the fantastic support offered by Maggie’s Cancer Caring Centres for quite some time now, it was more a question of us coming up with the right event that would provide them with the reach and platform that they deserve and we hope that with the Fayre of St John’s we have found that.” 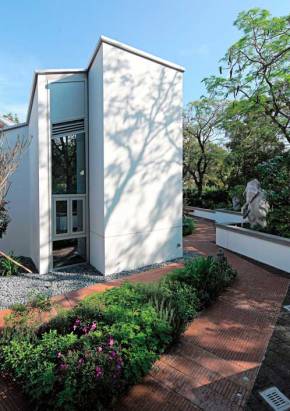 Natasha Li, a member of the committee helping organise the event added, “We were able to visit Maggie’s Cancer Caring Centre in Tuen Mun and I was extremely touched by the beautiful design of the Centre and the incredible support and tranquillity they offer cancer sufferers and their families.” This sentiment is echoed by Clare Keswick, who elucidated, “Spending time in the centre is very moving and you can see completely takes away the isolation of a cancer diagnosis.”

Held on 8th December, The Fayre of St John’s looks set to become one of the most prominent fixtures on the calendar of anyone who is anyone in Hong Kong. Based on the hugely successful Fayre of St James event hosted by Quintessentially Foundation in London, which this year boasts a line-up including Leona Lewis, Emma Thompson and Nick Frost, The Fayre of St John’s begins with a Christmas carol concert with a twist and culminates in the ultimate after-party at Mott 32.

Peppered with special performances and celebrity readings the evening will commence at the beautiful St John’s Cathedral in Central, before moving to the ultra-chic Mott 32 that, for one night only, will become a contemporary winter wonderland complete with entertainment courtesy of top Los Angeles-based DJ Max Chipchase, a silent auction of unique experiences and gifts donated by prestigious brands including the Mandarin Oriental Hotel Group, Gübelin and Shangri-La Hotels, as well as festive canapés and drinks.

Olivia Buckingham, another committee member explained that she was keen to get involved,

“Not only because I love all things to do with Christmas but also because I am familiar with the success of Quintessentially’s London event and of course a keen supporter of Maggie’s.”

However, it was perhaps Lily Ahn Riddick that summarised it best, saying, “Maggie’s offers exceptional, high quality, free services addressing the all important issues of mindset and emotional well being that complement the medical treatment that people with cancer receive. Most importantly, it offers a community to people who may be feeling isolated by providing a thoughtful, purpose-built space, programmes and professional staff.”

Keswick Jencks has left behind a legacy, its foundations laid in architectural appreciation and its bricks and mortar crafted from care and support. Here’s hoping that it remains standing for as long as it is needed.