Nihiwatu lies secreted in a tranquil corner of Indonesia. Amongst palm trees and surf, the conventions of luxury travel are being reinvigorated.

My legs were quivering as I struggled to keep upright on a board floating atop the Indian Ocean. Gingerly dipping the paddle into the sea to head out towards the horizon, after five or so minutes the sea’s swell stopped teasing me and I was able to pause and reflect upon my surroundings.Ahead of me, a dying crimson sun was sliding ever closer to the surface of the sea, defiantly and deftly altering the hues of the entire sky like a calligraphy artist boldly washing a blank canvas with inky characters.As if in celebration of this swansong, there was a distant rumble of thunder and a fork of lightning to the far west. Then blew a chilling fresh wind that induced goosebumps on my forearms and forced me to ponder whether my unsteady legs would bring me back to the safe harbour of the beach swiftly should there be a deluge.

Glancing behind me, on the shore about a kilometre away I spied Nihiwatu. I realized that the resort’s collection of villas and pavilions, bamboo cabanas and beach-side restaurants was playing a perfect host to my moment of pure sybaritic self-discovery. 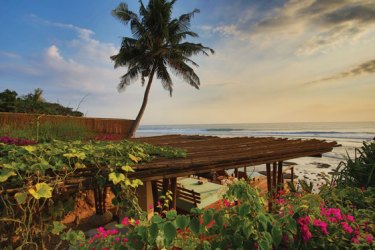 I was at once enthralled with the beauty of nature whilst indulging in an impromptu challenge. I then contemplated that this moment was just one tale in the heroic epic worthy of Homer’s Odyssey that Nihiwatu is carefully constructing day by day.

Carved along a remote stretch of Sumba Island in Eastern Indonesia, Nihiwatu is nurturing a new species of luxury travel. It is a creature that marries refined relaxation with ‘once in a lifetime’ experiences. Nihiwatu is redefining the very definition of opulence.

The promise of adventure is delivered as soon as one touches down on Sumba’s dark volcanic soil at Tambolaka’s ‘jungle airport’. Welcoming the tiny bombardier jet (Garuda offers daily flights from Bali), the airport is a single simple building consisting of little more than a luggage carousel. The promise of elegance is delivered with a lemongrass-infused cooling towel and a refreshing coconut with a straw.

The journey to Nihiwatu is a tableau of all the splendours and intricacies of the island of Sumba. As if perusing a Sumbian Bayeux Tapestry, scenes of thatched huts with vaulted roofs, young men casually strolling with long daggers tied by traditional fabric Ikats around their waists and school children with teeth as white as their uniforms all played out before my wide eyes. 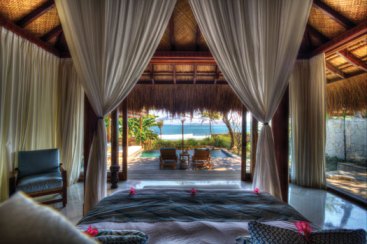 As the car turned a bend to drive down into Nihiwatu’s vast estate the unspoilt coastline was drawn out in front of me. The surf was smashing against the shore and clouds of mist and spray were streaming around the jungle-clad hills in defiance of the bright blue sky. As if to confirm the only possible interpretation of such a vista, Nihiwatu’s welcome sign proclaimed: ‘On the Edge of Wildness.’

This decleration became even more appropriate as I was ushered into the main complex and picked my way from the lobby building down sandy steps to my private villa, courteously led by Tinus, my private butler.

The style of a Nihiwatu villa can be defined as raw luxury. Carved wooden columns support a high thatched roof, the walls are textured clay and the cupboards are fashioned from coconut shells. The multi-sensory onslaught is completed with scents of ylang ylang, patchouli, jasmine, and lemongrass mixing with the sea breeze.

Nihiwatu’s villas are designed to organically connect with the stunning scenery that the resort inhabits. Mine featured a large veranda that overlooked the private pool below and tantalizingly reached out towards the surf. To the rear was the al fresco bathroom. A shower with bamboo pipework encourages bathing with the sand between your toes and the stars above your head.

Nihiwatu’s charm lies in its deep connections to the island of Sumba and its people. Local features permeate the fabric of the resort from the staff’s clothing (down to each butler carrying those traditional swords) to the vernacular architecture that mimics those village houses. 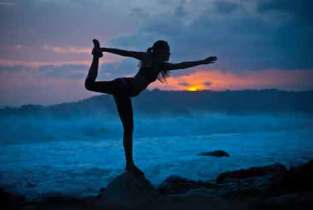 The entire resort is a flourish of philanthropy to support the island of Sumba. All profits go to the Sumba Foundation, which has bought real change to the island – working to scrub out Malaria, offer eye operations, provide clean water and build schools.

At Nihiwatu itself, turtle eggs are bought from locals for above the market price and transferred to the resort’s hatchery, ensuring their destiny is the ocean rather than people’s stomachs. The two restaurants (Nio nestled on the beach and Ombak perched atop a cliff) enjoy the freshest seafood sustainably caught from Nihiwatu’s waters.

Sumbians harbour a tribal chivalry that is entwined with that enigmatic creature, the horse. The Pasola, an ancient yet brutal horse racing and jousting contest in which blood is spilled to bless the earth, takes place just along the coast from Nihiwatu. Managing Partner James McBride is developing Nihiwatu’s world-class equestrian centre to harness this furious display of sportsmanship and valour.

McBride understands that to freely swing a polo mallet as your pony’s hooves dance along the wet sand while the sun forms a perfect semi circle dropping into the ocean is pure indulgence. It is exhilarating to bond with the animal, with the island and the very essence of Sumba. Yet it is bliss also to connect with something unfound or untouched within oneself. 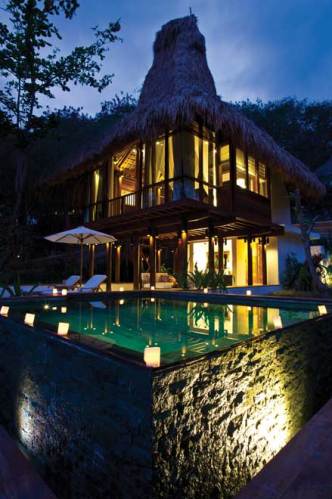 There are expressions of self-discovery such as this flowering throughout Nihiwatu’s acres every day: Drifting aimlessly in the swell alongside a palette of colourful fish that reminds you we are all ultimately susceptible to a higher power. Trekking to the Blue Waterfall where your reward for battling leeches and monkeys is a soul-awakening chilly dip in ancient volcanic waters. Strolling across rice plantations, barren hills and through thousand year-old villages ending with a foot massage to the tune of water breaking on the beach below.

To divulge too many of such Nihiwatu moments in print would be frightfully crude. Rest assured that these experiences combine the elemental rawness of the surroundings with a carefully curated elegance that will leave no part of your body or soul wanting.

Yet the defining features of Nihiwatu are also polarizing. Whilst some may find the tracks of a large lizard in the otherwise perfectly swept sand outside your villa invigorating, others will find the blurred lines between the guest and the wild undesirable in a luxury holiday. The banana leaves that replace bin bags and the geckos singing a nightly lullaby are specialities that do not tempt all.

McBride admits it is not for everyone.

“It takes a special type of person to really thrive at Nihiwatu,”

he says. With the resort’s remote nature it’s important to foster a synergy amongst those who make the pilgrimage to Nihiwatu.

Nihiwatu’s privileged visitors revel in a chance to resonate with something pure and elemental. There’s serenity but there’s also adrenaline, there’s opulence but there’s rawness. For what is luxury if it is not the freedom and the ability to fully express oneself?

Coco Chanel famously eschewed colours and patterns and cut her designs tight and short, creating that wardrobe main-stay, the little black dress. Nihiwatu is doing to luxury travel what Coco Chanel did to fashion, rewriting the conventions of the industry.

It was with these thoughts and a heavy heart that I took a last look over my shoulder as I left this treasured corner of Indonesia. I was comforted by the knowledge that along its shoreline and into the tropical hills the Nihiwatu epic would be continuously weaved.

For myself, these are just a fraction of the tales I will tell in the years to come. Did I mention that my butler Tinus is the son of Sumba’s greatest assassin…?