The Maldives is known for its surreal lagoons and heavenly marine environment and has become one of the most coveted holiday destinations in the world. It’s also a country full of charming mysteries and contradictions. 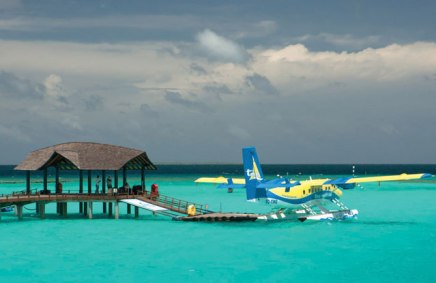 Landing at Malé International Airport after a six-hour flight, I was able to see the capital city floating on the water, its high-rise buildings packed together like giant stalks of bamboo rising from a distant plantation.

Among the buildings on the waterfront, the golden dome of the Maldives’ biggest mosque stood out. It gave this nation of 1,192 islands spread over roughly 90,000 square kilometres of water an unambiguous identity as a Muslim country that’s balancing tradition against the needs of an international tourist destination.

The Maldives is a friendly nation. It welcomes all nationalities and grants a visa on arrival to all visitors, except those who carry prohibited items like pornography or bibles. After disembarking I was soon surrounded by men in thawbs and women in hijabs, and I began to worry that I should have packed a burkini in order to do all the swimming and diving I wanted without being arrested for blasphemy.

Staff from The Sun Siyam Iru Fushi resort soon dispersed my misgivings. Stationed at the airport, they make sure that guests are whisked off to their more liberated part of paradise at the fastest possible speed.

It took around 10 minutes from the airport concourse to arrive at the waiting lounge close to the jetty, from where a seaplane would take us to the resort. The lounge smelt of flowers. It provided spa services, recliner sofas and various refreshments exclusively for Iru Fushi guests. In the lounge I had my first taste of the sybaritic joy that lay ahead, being greeted with a refreshing tropical drink and a chilled towel.

The Sun Siyam Iru Fushi is located at Noonu Atoll in the northernmost reach of the Maldivian archipelago.

The only way to get there is to take a seaplane. Contrary to my expectations, the 45-minute flight was absolute bliss rather than an inconvenience, an amazing experience of its own rather than just a way to commute.

Seating 18 people including two pilots and one crewmember, the seaplane skimmed across the water before rising to sky. The engine operated with a thundering noise, which made no impression on my senses because I was flabbergasted by the beauty before my eyes.  From my window seat I saw views that changed from splashing water, to a matt metal plate pressed with decorative  curves made by sinuous wavelets, to a pristine navy cloth that soon became decorated with sapphire lagoons in various shapes and sizes. 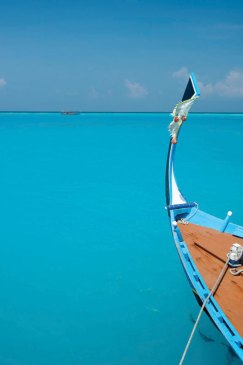 The aerial view of Maldives is a like a work of surreal art, its colours are so improbable; it is also an impressionist masterpiece with a virtuoso application of colour and shade. The puffs of cloud, misty rainbows, rambling islands, blue lagoons, the borderless ocean and sky left me breathless and feeling like I had been castaway in space.

As the seaplane descended, The Sun Siyam Iru Fushi resort loomed ahead. Stepping out from the aircraft, I saw a team of Iru Fushi staff lined up neatly on a wooden jetty, with a greeting of cold towels and fresh flowers from the island.

The hospitality of the resort’s staff was one of the warmest I have ever received. However, the heavenly scenery eclipsed even their sun-bright smiles. The light blue of the lagoon was even lovelier when seen up-close.

I hopped on the back seat of a buggy and was transferred to the island. The air was loaded with oxygen molecules and the moisture level was perfect. I could feel my lungs expand with relief as their memories of Hong Kong’s pollution began to fade.

A whim arose in me during a short sojourn waiting for the check-in. Accompanied by another refreshing tropical drink and rhythmic sounds of the ocean, I was willing to give up the modern world including all its amenities, just to spend the rest of my life here.

As if to prove how greedy we can be, my accommodation – a Deluxe Beach Villa with Pool – made me realise I couldn’t forfeit all aspects of the civilised lifestyle after all and I wanted to have both the best of nature and human civilisation. Luckily for me, I was at Iru Fushi.

The villa consisted of three parts: an open-plan living space under a cone roof covered with dried leaves; a spacious outdoor bathroom with two rain  showers, a Jacuzzi bathtub and a canopied daybed; as well as a private pool next to a shady sala facing a horizon that unites two shades of blue, the ocean and the sky. 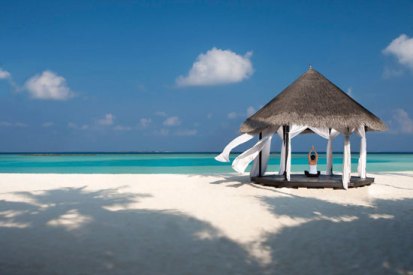 I swept away everything that was unfit for the surroundings and locked my worldly concerns in the closet. Then I went for a stroll along the beach, under a darkening sky that was tinted with orange.

The sand was soft and occasionally dotted with tiny entrances to hermit crab tunnels.

The ocean has been telling a story here in the same deep calming voice since this island first emerged, and I, like many people before me, was fascinated.

It was dusk when I arrived at Flavours,  a restaurant that is built on the sea and opens to a 270-degree view over the vast expanse of water, where the last traces of sunlight were fading as the moon took over the sky. The ocean and the sky were both saturated with indigo, the boundary between them being invisible. The stars began to make their appearance, commencing a new nocturnal show.

Flavours offers fusion dishes that involve a range of culinary styles and regional delicacies, from Japanese sashimi and sushi, Thai tom yum soup, Indian curry, French steaks, to Portuguese clam dishes. Wine lovers can pick their own favourite vintages in person from The Cellar, which is conveniently situated next to the restaurant.

After dinner, I strolled back to my villa, reluctant to say goodbye to the stars.

I stepped into my private pool and floated on the water, letting my thoughts dip into the long river of Maldivian history. 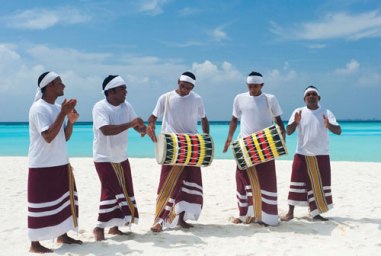 In my blissful serenity, I could see how valiant seafarers on their dangerous errands across the Indian Ocean accidently ran into one of the country’s 26 ring-like atolls, and decided to settle. They came from South and Southeast Asia, Africa and Arabia. Some settlers enjoyed a secluded lifestyle, while others continued their seafaring trade, sending their sea-mastering descendants shuttling between the ports along the sea lines of the Eurasian and African continents.

It was not by accident that Roman historians recorded a visit of a Maldivian delegation to Rome, bearing gifts to emperor Julian in 662 AD; historical Chinese documents also bear a record that in the seventh century the King of the Maldives sent gifts to the Emperor Gaozong of Tang Dynasty.

The Maldives’ strategic location and resources first attracted the attention of Arabic traders, who converted the Buddhist country to Islam in 1153 AD. Then came the European colonists in the 16th century and the country changed hands among the Portuguese, Dutch and British before earning independence in 1965. With my mind marinated in history, great food and other sensual delights, I was ready for sleep. 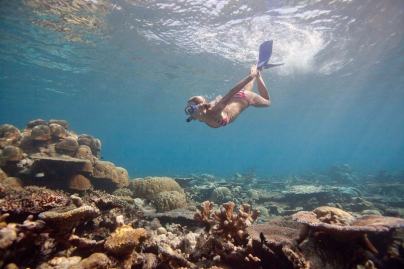 I awoke at six thirty the next day and it was dawn already. The previous evening it had been too dark to swim in the open water, so I wasted no time in getting ready to jump into the ocean, which was saturated with glorious sunlight. The seawater was limpid and the visibility was the best I have ever seen. Besides the usual fun of swimming in open water, I was able to snorkel and observe a galaxy of sea creatures as they made their early morning rounds.

I ventured toward the coral reefs that were further away from the  shore, where I could detect the tragic aftermath of the 1998 El Niño event in some of the bleached corals, which sent out worrying signals that this paradise had been encroached upon by pollution. Nonetheless, the various kinds of tropical fish that feed and hide among the corals are absolutely stunning.

The morning exercise gave me a good appetite and I feasted upon the amazing breakfast buffet at the Iru Restaurant. My trip consisted of four days, a short stay compared to most of the travellers who normally enjoy at least a week or two, which places the resort’s guests among the upper echelon of the world’s wealthy, as prices run at around 3,000 US dollars per night. 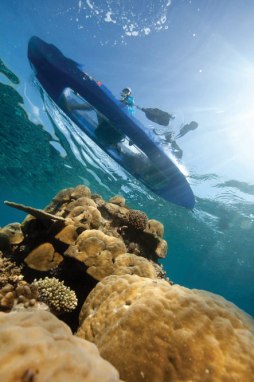 For the next three days, swimming and snorkeling constituted the major part of my daily activities and the biggest source of joy, but I also participated in various fun-laden activities that Iru Fushi provides for its guests, including a Maldivian cooking class, spa treatment, Friday Maldivian dancing night and a snorkeling safari, the last of which was my most memorable experience in the Maldives.

I took the snorkeling safari on the last day, and visited two different coral reef locations that are about 40 minutes away by boat from Iru Fushi. Our experienced coach chose these two spots for their vibrant species of coral.

My favourites are small but luminescent ones that were oval in shape with a crevice in the middle. I could see them dance under the effect of the water, their shapes contracting with the rhythm of the waves.

The sheer variety and quantity of fish species made the experience like swimming in a gigantic aquarium. I entertained the possibility that I had been given a magic potion to make my body shrink, because the fish seemed to be much larger and quicker than I had ever imagined.

One of my recurrent dreams is that I swim alone in a vast sea, and I believe this close encounter with marine life will definitely make this dream more interesting in future. And no doubt, the Maldives, with her enchanting character and beauty will be woven into my sweetest dreams for many years to come. By Summer Cao 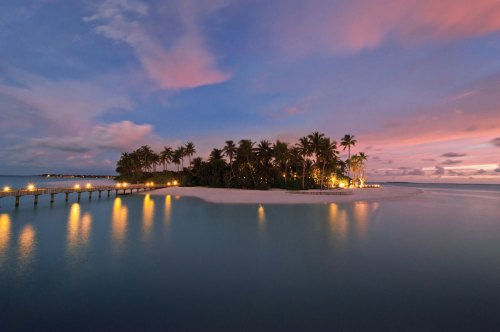