In times past Chiang Kai-Shek, gangsters with tigers and French diplomats all sought refuge from Shanghai’s steaming summer in Mohkan Shan, the mountainous region to the south of China’s biggest city. In 1948 the area descended back into obscurity but in the last five years it has had a glorious rebirth, thanks to the arrival of some world-class resorts.

It was 5 am and the sun had begun to splash sparkles of silver across the mirror in my bedroom. The reflected mercurial beams danced along the floor like pebbles skipping across a slate grey lake. Through my open window the silence was absolute except for a sibilant noise that was marked by a series of hesitant beats and then a short swish. As my ears wake up they catch the baying of a donkey and I’m suddenly at the window staring down at a verdant fantasia.

Laid out in front of me from my suite at Le Passage de Mohkan Shan was a petite valley lined with tea terraces that are dotted with tea pickers, whose nimble fingers had been making the curious noise I’d caught from my pillow. The workers were barely moving and for a second the valley was so still that it looked like a jacket with bands of green braid across a brown velvet background, the pickers playing the role of buttons.  Then the donkey brayed again and the illusion was broken. But the one thing that’s certain on Monganshan is that one dream-like landscape will soon be replaced by another, the changing light of a long sunny day being like a movie director shifting his scenes into position.

Frenchman Christophe Peres and his English-born Chinese wife Pauline Lee founded Le Passage de Mohkan Shan and opened the resort in 2012. Now in its second year, the 40-room property has a main building surrounded by small two-storey villas. Peres is from the Pyrenees and the property resembles a chic ski lodge, although the couple, whose main business is a property company in Shanghai, say they have been careful to make the resort blend with its surroundings, using century-old recycled wood in the construction. The handmade French tiles on the floors give the rooms a taste of rustic luxury.

The tea plantation surrounding Le Passage is organic and is famous for its Long Jing (Dragon Well) tea. On my visit they were picking Ming Qian Long Jing or Pre-Qing Ming shoots. These are the highly prized buds that must be plucked before the Qing Ming grave sweeping festival begins. The production cycle is short, usually only 10 days before every year, which explains why the pickers were up so early.

“Moganshan’s Zhejiang province is home to some of the most famous and aromatic teas in all of China, which have been harvested here for thousands of years,” said Peres as he negotiated narrow roads at speed toward the co-operative that prepares Moganshan tea for sale.  “For the last 10 years our plantation has been following bio-dynamic principles, free from pesticides, chemicals and artificial fertilisers and ther growers have started to adopt the same approach.” 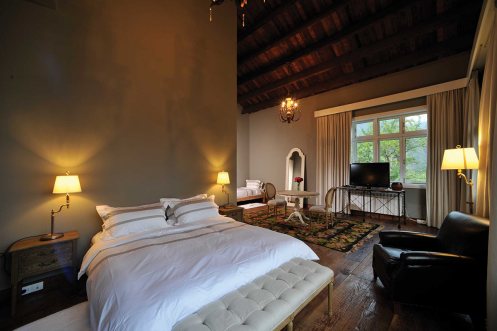 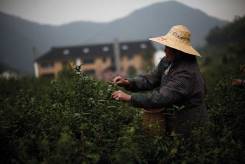 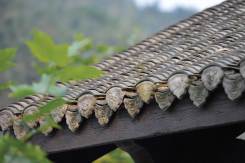 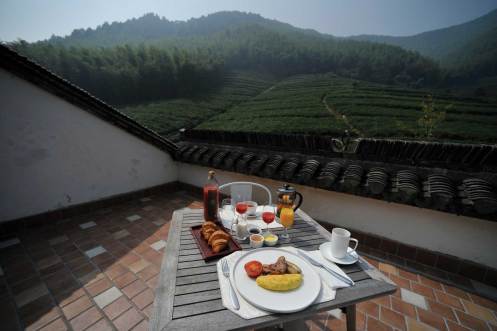 Peres revealed that the best small tea producers in Moganshan have formed an appellation d’origine controlee to protect local growers from counterfeits and to promote the high-quality teas in China and international markets, where prices for first-class green teas can rival those of fines wines and caviar. It’s ironic that the region is now seeking an international market, as its history includes a disastrous experience that might have precluded further contact with foreigners.

Early in the 19th century, China was the exclusive exporter of tea to the West and England’s East India Company was keen to break China’s monopoly. They dispatched Scottish botanist Robert Fortune to China in 1848 as a tea spy and the intrepid plant collector shaved his head, leaving just a ponytail, and wore Chinese clothes so he could travel unhindered in the interior, including tea-producing regions near Moganshan, where he collected plants and seeds from the best plantations. Fortune dispatched more than 20,000 tea plants to India, which by 1890 was supplying 90 per cent of Britain’s domestic market. It was a blow that set China’s economy back several decades.

Peres denied he is trying to repair some of the damage caused by previous foreign incursions into Moganshan’s mysterious hills but his venture at Le Passage certainly has the air of a mission. Apart from nurturing the tea terraces he has planted a rose-garden with 10,000 bushes and installed a saltwater swimming pool with views through the tea plantation to the acres of bamboo that swarm along every slope in the region.  He is also trying to give birth to an indigenous pear brandy.

“Pears originated in China,” he said as we toured the cellars beneath the beautiful Le Passage restaurant

“Our brandy is called Poire Pauline – after my wife –  from pears collected in August, then mashed and fermented in large clay jars.  We use a double distillation process that results in a delicious dry brandy. ”

To build up a thirst the hills around Le Passage offer extensive opportunities for biking and hiking – Peres and Lee first found the site property when out on a hike in 2009 – and the higher one climbs the greater the sense of isolation and majesty. Peres took me to the peak of Mount Mogan, where the view down the valleys provoked speculation about how the peak got its name.

“The symbol of Moganshan is a sword,” says Peres. “Gan Jiang was China’s most talented sword maker in the Spring and Autumn period. He was married to Mo Ye. King Helü of Wu ordered the couple to make a pair of swords for him. The work took two years and the swords were named after the couple, but Gan Jiang only handed the Mo Ye sword to the king. He had them both killed and their spirits formed together to make the mountain.”

That’s just one account of Gan Jiang and Mo Ye’s demise but that matters not. The beguiling atmosphere in Moganshan makes it possible to believe any number of myths and the shadowy bamboo forests seem to grow thick with faeries and monsters as the sun goes down. That’s a good time to retire to Le Passage’s dining room to tell stories and linger over dinner where authentic French cuisine is served along with regional specialties developed on the plantation from local, organic produce.

The food is the perfect compliment to stories about the Nationalist politician who played host to Chiang Kai Shek’s Moganshan honeymoon with Soong Mei-ling and the opium trade gangster who was rumoured to have fed an out-of-favour mistress to his pet tigers, supposedly telling friends: “It was a mistake, but luckily the tigers survived.”

Le Passage’s dining room with its French country style wooden tables has recently been full of storytellers. On my visit the head of Hermes in China came by, along with a senior figure from Pernod Ricard in Paris and one of Shanghai Tang’s co-founders.  The glut of well-heeled visitors reflects the fact that Le Passage is a charming place to spend a weekend: the staff are inexperienced but have such sweet natures that it’s hard to be cross and the scenery is soft and magical, the bamboo forests so green and lyrical that it becomes obvious why these giant grasses have played such an important role in Chinese poetry and painting. Le Passage has also had no shortage of Chinese visitors, many of who are from the first generation of Chinese millionaires who are now keen to explore their own country.

“When the Chinese started to travel they wanted to go far,” says Peres.

“Now you have some people who have money to travel far, who’ve been to Europe and they want weekend escapes.”

Access to the beautiful mountains and the variety of the landscape makes Moganshan worthy of much longer visits and for that Le Passage has plenty to offer. Not least being the chance to wake up with the rustling sound of tea picking just a few feet away.