In the heart of London are three hotels that set a standard for hospitality few can match. The Connaught and Claridge’s in Mayfair and The Berkeley in Kensington are part of the Maybourne Group, which has created a reputation for excellence that is the envy of its competitors. Daniel Jeffreys found that the most difficult part of making a reservation is how to choose among a glorious trio of grand hotels that are steeped in history. 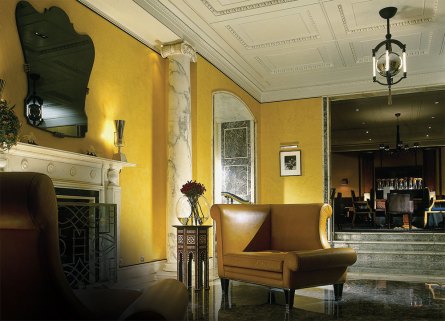 [dropcap size=small]I[/dropcap]t was the middle of the morning at Claridge’s hotel in London and the marble lobby with its black and white chessboard pattern, grand staircase and iconic tearoom was bustling with well-heeled clients and immaculately attired staff. Despite the scene’s whirling intensity the reception staff, led on this occasion by the charming Joanna, had the serenity of saints on the façade of a great cathedral. But I wondered if they would stay calm once I opened my mouth. I had a list of demands that included checking three bags into my room (without me), unpacking two suits and sending them to be pressed, finding a table in the foyer restaurant during one of its busiest times and locating a television producer who was somewhere in the hotel awaiting a rendezvous.

The list seemed like a demand or three too many, and in most hotels, even the best, it might have been met by a blank-eyed stare, but to Joanna’s team each request was received as if it were a benediction. Like the seraphs and cherubim they appear to be, the Claridge’s reception team live to manifest perfection in matters of effortless hospitality. Before long I was through the lobby, my room was being sorted along with my bags and the producer had been attached to my side.  She was dazzled. “They treat you like royalty here,” said Ms. TV and they do, but not just me and not just Madonna or Jackie Kennedy or HM Queen Elizabeth or any of the other guests who have spent time within the hotel’s Victorian red brick. Claridge’s has all the usual accoutrements of a luxury hotel including spas and a fabulous restaurant, but what makes it special is the way everybody on the staff seems to know your shoe and collar size, what drink or tidbit you might need and if you like a hard or soft pillow. 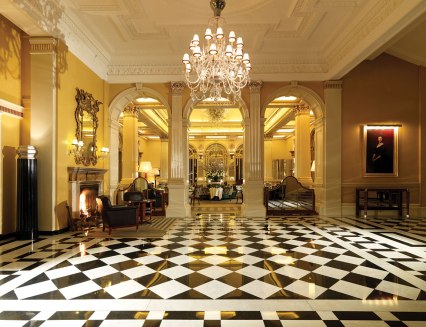 So does that mean Claridge’s is the most attractive of the three sister hotels that make up the Maybourne Group? Are The Connaught and The Berkeley wonderful enough, but not quite in the same fabulous stratosphere as Claridge’s? Change the day and the month to earlier this year and it’s The Connaught and the corridor outside the Sutherland Suite. My bags were lined up like a corps of royal guards and I waited with them for the door to be opened.

The opulence of the Sutherland Suite is so extraordinary that for a moment the world, or rather the perfect wooden floored baronial corridor on which we stood, seemed to shift and ripple in a manner that might make one think a speaking, thinking bag is a possibility and that it could become tongue tied when confronted with the mysteries of nobility. While I gazed inside I sensed that my well-traveled bags had suddenly turned shy, reluctant, retiring even, as if they were thinking, “No, this suite cannot be for us. We may have been manufactured in a great Italian fashion atelier, but surely this stately mansion is not where we are supposed to be. 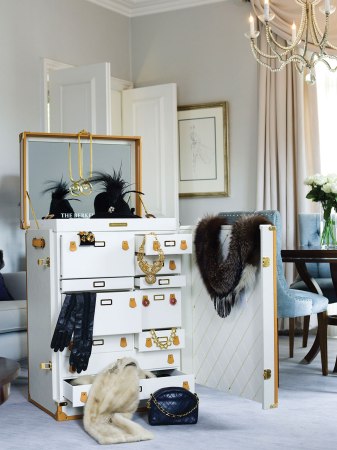 What we (or at least me) could see was an expanse of polished oak floor that was occupied by an enormous silk rug. In the centre of the 30-foot long room was a mirror of majestic proportions. To the right was a grand piano that looked like it could have been left behind by Beethoven or Chopin (it was actually the former possession of composer Władysław Szpilman, upon whom Roam Polanski’s The Pianist is based). To the left was a sofa that reminded me of a 50s-style silk-swagged dress by Mignon. Behind that hung museum quality works of art.

It was all lovely, but where was the bed? The answer was provided by the bellhop who called from somewhere in the distance. I followed his muffled tones down a corridor, past a fleur de peche marble bathroom suite and entered a chamber with an expanse of satin that appeared to float three feet above the floor and seemed large enough, at a pinch, to accommodate a basketball match. I had found my sleeping quarters and was happy to discover that the majestic bed was keeping company with an exquisite French maple set of wardrobes and dressing tables.

Later that day, exhausted from a meeting of six, I put on Mozart’s Magic Flute (the suite has a sound system worthy of Carnegie Hall) and played along from the Steinway. For a few minutes I could not imagine a more sublime experience. I didn’t care that my playing was off (I would guess next door they would be saying “way off”) because I was able to capture for a few seconds that always elusive existential moment when perfection and the search for it were in perfect harmony, like the moon and the sun during a total eclipse of the sun; a few seconds that are both exhilarating and terrifying. And never has there been a better description of true luxury.

It might be tempting to conclude that The Berkeley must be the awkward younger sister of its grand dame siblings, a mere slip of a thing, all gangly and cast out in Kensington where the hustle has more bustle and the stores have less of a solid-gilt edge.

It’s true that The Berkeley is more gamine. The intimate lobby and the seductive bars that sit nearby have an air of naughtiness, as if the Berkeley is the sister most likely to be sent home from boarding school for sneaking out to play with boys. It’s also true that the Berkeley would be the place most young bucks (or buckettes) would choose for a hot date where the champagne is Cristal, the lingerie is La Perla, the diamond is large and the evening is destined to end in a proposal. But these features are just the bright silk bows of a hotel that, beneath its surface, has all the values that make Claridge’s and The Connaught so desirable.

Consider a Saturday in summer and the traveller has arrived fresh from a flight on a UK-based carrier where careless staff had dumped hot coffee upon the keyboard of his computer. 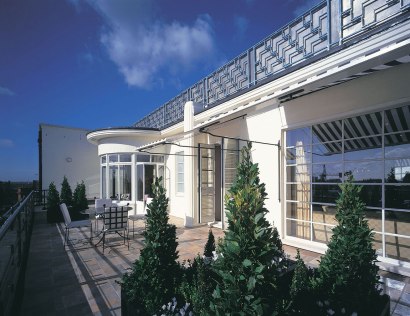 The terrace suite at The Berkeley

Rather than offering to deliver a new machine to The Berkeley by the time the aggrieved party checked in the airline made lackadaisical suggestions that involved the injured party (me) making visits to repair shops and finding technicians who might judge if a computer I had renamed corpse was actually dead.

The Berkeley staff leapt into action and did all they could to solve the problem, including a quick trip to the Covent Garden Apple store. The Berkeley also has a unique touch of cool for that young couple if they stay on a couple of extra nights to celebrate their engagement. Imagine said couple had arrived in little more than the La Perla and a bespoke pair of suits from Savile Row. Now they get an invite to a grand ball at one of the many nearby royal palaces or noble houses. What to do? Easy. Call for the Berkeley’s Fashion Trunk by Atelier-Mayer.

Guests in the Berkeley Suites can request the trunk upon check-in and each of its drawers houses vintage statement pieces including a 60s Christian Dior necklace, a 70s Pierre Cardin Studio 54 evening clutch and a 50s Marilyn Monroe-style embellished mink stole. The Fashion Trunk is delivered in the later afternoon and guests enjoy all the accessories with the hotel’s compliments. The Berkeley’s concierge will also arrange for guests to purchase pieces from the trunk, should they so desire. 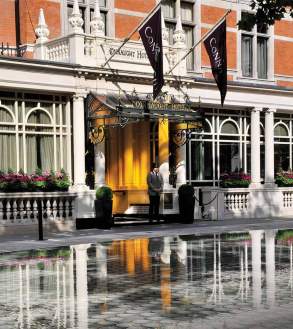 The entrance to The Connaught in Mayfair

Extra touches such as this have become a hallmark of The Maybourne Group hotels. The Connaught now has its own Aman spa, awarded the coveted Spa of the Year award by Quintessentially last year.  It features a treatment inspired by China, which is designed to restore the body’s Qi (vital energy) through the use of rejuvenating essential oils and massage techniques that stimulate the meridians (energy lines) to release stress.

And at Claridge’s there is the hotel’s iconic butler service, which allows guests staying in suites to enjoy all the privileges of Downton Abbey style personal service, including the creation and service of private dinners in-suite and the implementation of client check-lists, complied before arrival, that cover everything from pressing to packing to bedding choices. The Maybourne Group is currently mired in a controversy over its ownership with Belfast-born entrepreneur Paddy McKillen doing battle with Sirs David and Frederick Barclay, who own the Telegraph newspapers and London’s Ritz Hotel.
Observers fear that the result could be the break up of the group and the sale of its individual properties to the highest bidder. This is a terrible prospect, akin to Mrs. Bennett in Pride and Prejudice putting Elizabeth’s three sisters up for auction on Ebay and selling each one to a couch potato in Florida. London’s most desirable, most eligible siblings deserve a better fate and most of all they deserve to remain linked, each one reinforcing the other, as family is meant to do.  Three sisters, all different, all beautiful.  All meant to be together.
Sister Connaught 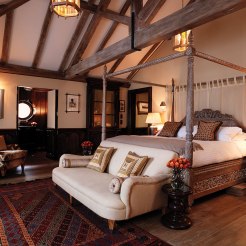 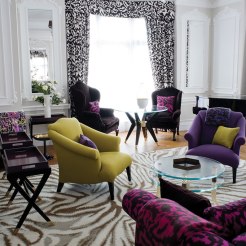 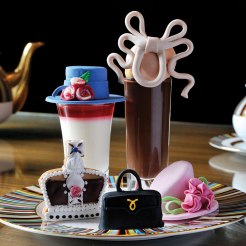