It’s Paris but quiet, sylvan, verdant. And I have a glass of impeccable Meursault in my hand that’s chilled to perfection. There are few private spaces that are only a 30-carat-stone’s throw from Place Vendome where such a sybaritic aperitif would be possible. The garden cafe at the new Mandarin Oriental in Paris is one of them. Of course when the hotel is packed beyond its seams during fashion weeks with Wintours and Versaces the tranquility of the Mandarin’s garden might be more elusive, but on a chilly night in October it was perfect, as was the foie gras terrine with macerated cherries and cherry gelée followed by brill marinated in coffee with steamed asparagus and rhubarb with honey, the food provided by the Mandarin’s Camélia restaurant, anchored by Thierry Marx’s original take on traditional French cuisine.

The hotel is at 251 rue Saint-Honoré, in the first arrondissement and that makes it perfect for strolls to the Louvre, the left bank and the couture houses of Rue Cambon and Avenue Montaigne. For those who like night life and the espirit de tweet of clubs, Hôtel Costes is almost next door. But it’s that garden, under a Parisian sky, with its flashes of light from the Eiffel Tower that beguiles and sends one off to sleep in sumptuous Mandarin luxury with nothing but dreams of poetry and romance. Trust me, you won’t want to leave. 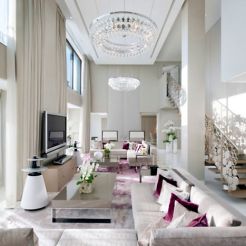 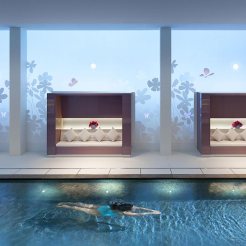 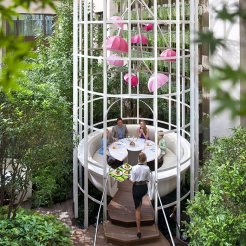