Sport can claim few better partners than Polo and Royal Salute, a game of monarchs matched with a whisky that honours a Queen. The Maharaja of Jodhpur’s Golden Jubilee Cup is the most prestigious competition in Indian polo and it has been sponsored by the regal scotch brand since 2007. As Daniel Jeffreys reports, the latest chapter of the cup’s history showed how Royal Salute’s support for polo is fuelling the sport’s growing reputation.

[dropcap size=small]S[/dropcap]hadows had begun to lengthen across a well-cropped polo field in Rajasthan on the penultimate day of 2012, as men from the Indian Army’s 61st Cavalry polo team defended a narrow lead in the final of the Royal Salute Maharaja of Jodhpur’s Golden Jubilee Cup.With the seconds ticking away, the talented titans of EFG were awarded a 60-yard penalty. The ball was struck hard by the mighty 4-goal player Uday Kalaan but flew harmlessly wide of the Cavalry left goal post and the game was over.
It had been a thrilling contest with only two goals scored by each side, the matter being settled by the Cavalry’s half-goal handicap advantage.The spectacle had been watched by His Highness MaharajaGajsingh II of Marwar-Jodhpur, who stepped from the grandstand as the sun set over the Thar desert to hand the coveted Royal Salute Maharaja of Jodhpur’s Golden Jubilee Cup to ColonelNavjit SinghSandhu, the Cavalry team’s captain. It was an unusually chilly evening in Northern India, which compelled the Maharaja to wrap himself in a cashmere scarf and thick tweed coat, and it wasn’t until he’d taken a sip of Royal Salute whisky that he truly began to look warm and cosy again. 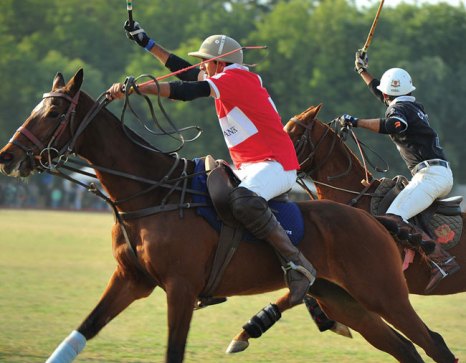 “It was a splendid final,” he says, as he nursed his glass seated in a large wicker chair. “There was a lot of strategy and closely fought battles. It was my favourite kind of game.”

It seemed perfectly natural to find a King, the “sport of kings” and the only whisky created for a Queen in such intimate proximity. In recent years polo and Royal Salute have become so closely entwined that they are almost synonymous with each other. The Royal Salute World Polo project has seen the 60 year old whisky brand sponsor 15 top-flight polo competitions in Argentina, the US, Italy, China and Windsor Great Park, the back garden of Windsor Castle, home to Queen Elizabeth, whose coronation in 1953 was the inspiration for Royal Salute, the only whisky blended from Scotch that is at least 21 years old. The support that Royal Salute has given to the sport is helping to raise the quality of the game in powerhouse polo nations like Argentina and has given ancient polo nations like India a chance to rebuild traditions and standards.

“Royal Salute’s vision is to celebrate the power and skill of this noble sport. They are a serious player in the world of polo and I have great respect for what they do.”

Pieres is much admired, having become the youngest Argentinian to be given a 10-goal rating (the highest possible) when he was just 19 years old. His new link to Royal Salute underlines how seriously the brand views its relationship with polo and how important that link is to the current stars of the game. 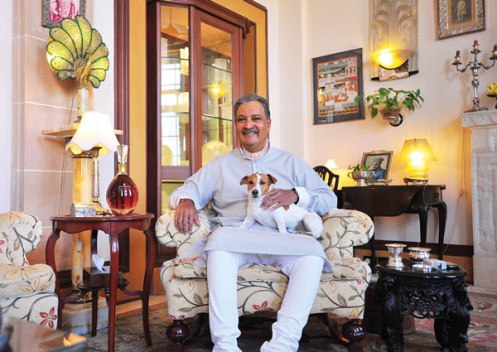 “My role is to bring to life this association, both as a polo player and as someone who’s life and passion is dedicated to ‘the king of sports and the sport of kings’,” says Pieres. “Through my role as Ambassador, I will be playing at and attending various Royal Salute events.”

It’s hoped that Pieres will play in Jodhpur this year, which will add great lustre to a competition that has increased steadily in esteem thanks in large part to a substantial investment by Royal Salute.

The 2012 Jodhpur final completed a six-day ten-goal competition that had seen eight teams of internationally renowned players battle for the coveted trophy. The Maharaja, who has been the leader of the Rathore clan since he was four years old, attended every game, leading a cavalcade of beautiful vintage cars on the final day that lined up in front of the royal pavilion.

“I believe this should be an event of the highest standard,” he says, his brown eyes twinkling with a hint of mischief as they often do, especially when he hits the dance floor at one of his famous gala balls.

“We want the best players, the best ceremonies and the best parties.”

On the final day of 2012 the Maharaja delivered on all three, especially the last, hosting an exquisite New Year’s Eve soiree at the Mehrangarh Fort, where the Jodhpur monarchs and other members of the Rathore clan lived from the fourteenth century, until they moved to the new Umaid Bhawan Palace on the opposite side of the city in 1944.

The Mehrangarh New Year’s eve celebration with its sinuous dancers and gifted musicians playing alongside puppet shows and fire-eaters has become the traditional exclamation point at the end of the new Jodhpur polo season, which begins on the first Monday of December. The vibrancy of the occasion is a testament to the success of Royal Salute’s polo programme in Jodhpur and evidence for the Maharaja’s deep appreciation of the city’s storied history.

The Maharaja’s ambition is kingly in scale. Polo took hold in Jodhpur in the last decade of the nineteenth century. The players of the 1890s were soon bringing home trophies and in 1897 they travelled to England to play matches that celebrated Queen Victoria’s Diamond Jubilee. By 1922 Jodhpur had become champions of India, defeating the Patiala team. Legend has it that the Maharaja of Patiala was so enraged that he let loose his horses in the crowded alleyways of Delhi and ordered his team to burn their sticks and never take the field again.

“This is one of the most marvellous aspects of Jodhpur polo,” says Peter Prentice, the Director of Heritage at Royal Salute who has been engaged with the whisky’s backing of Jodhpur polo since the partnership began five years ago.

“It’s not just the world-class sport but the sense of history, of being engaged with an Indian Royal dynasty that is almost one thousand years old and has within its past lineage men who played the sport at the time of its birth.”

Royal Salute’s presence in Jodhpur polo is strong and passionate, as it is in the other parts of the world where it supports the sport. In recent years Royal Salute World Polo has been proud to back several polo tournaments that support charities whose patrons include the Duke of Cambridge and Prince Harry. The whisky has had an especially close association with Sentebale, with tournaments to raise funds for the charity played in the UK and Brazil. The brand is the title sponsor of the Sentebale Royal Salute Polo Cup, which supports the charity that was founded by Prince Harry and Prince Seeiso from the Lesotho Royal family, in response to the plight of needy and vulnerable children in Lesotho. 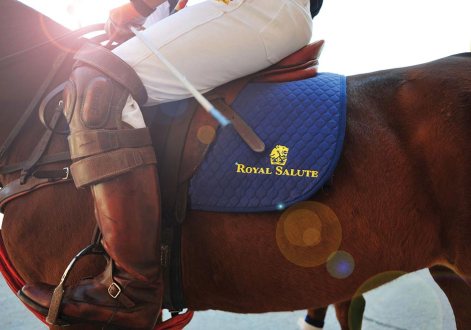 The House of Windsor has had a long association with polo, with Prince Harry’s grandfather, the Duke of Edinburgh, having been a talented player in his youth, handing his passion for the sport to his son, Prince Charles. Such is the grip that polo seems to take within the DNA of families who play the sport that most polo clans can tell the same story, and the Jodhpur royal family is no exception.

Few members of Maharaja Gajsingh II’s royal lineage had more enthusiasm for polo than his grandfather, His Highness Maharaja Umaid Singh, who took his place on the Jodhpur throne in 1918. Seven years later he led his Jodhpur team and seventy of his finest ponies to London for a season in which they won every game.

“It must have been a incredible sight to seem them play,” says the current Maharaja. “My grandfather was a very determined man and he went to London with victory as his goal, but even he must have been surprised by the scale of Jodhpur’s triumph.”

The onset of the Second World War brought an end to the golden years of Jodhpur polo. By the 1950s, where once there had been six polo grounds only two remained, and neither were in pristine condition. This decade was also marked by tragedy, and rebirth. In1952 the 38th Maharaja of Jodhpur died in a airplane crash at the age of 28, leaving his four year old son to take his place on the throne and England’s King George VI succumbed to lung cancer at the age of 57, making a queen of his daughter Elizabeth.

The coronation of Queen Elizabeth was marked in many ways, but one of the most interesting informal tributes was the decision by Chivas Brothers to create the Royal Salute 21, named after the 21-gun salute that is fired by cannons to mark royal occasions. The creation of the 21 in 1953 and the fact that Queen Elizabeth II and Maharaja Gajsingh II have both just marked their Diamond jubilees gave Royal Salute the perfect opportunity to reinforce its support for Jodhpur polo by presenting the Maharaja with a unique edition of the Scotch, crafted with whiskies from each of the six decades since his coronation, some of the blend being from distilleries that are no longer in production, adding immeasurably to its rarity.

The Royal Salute Maharaja of Jodhpur Diamond Jubilee blend was presented to His Highness at the opulent Diamond Jubilee Ball that followed the cup final, held at the Umaid Bhawan Palace, where the Maharaja lives in one wing, the rest of the property now being used as a luxurious hotel.

“I absolutely relish hosting the Royal Salute Maharaja of Jodhpur Golden Jubilee Cup,” said the Maharaja as he held the specially made crystal decanter.

“This year in particular, being a significant year for me and my family, the celebrations have been the perfect way to mark a momentous 60 years.”

The Maharaja re-launched the Jodhpur polo team in 1993 and in March 2000 the new grass polo ground in Jodhpur was unveiled, beginning a revival that the Maharaja believes has significance well beyond the game. 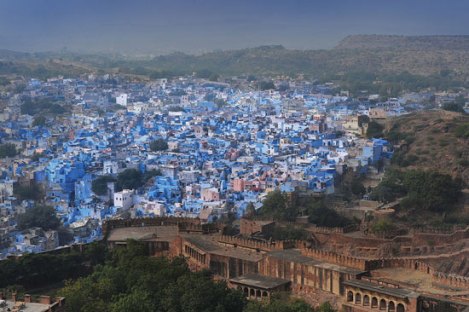