With a thunderous roar cannons from the Honourable Company of Fusiliers gave a regal salute to Queen Elizabeth II as she passed by the Tower of London on her diamond jubilee in June. Few of the millions who watched the explosive homage would have known that the guns and the palace from which they were fired rely on a charity for some of their upkeep, one that has just formed a partnership with a blue-blooded whisky. Daniel Jeffreys was there to ask why. 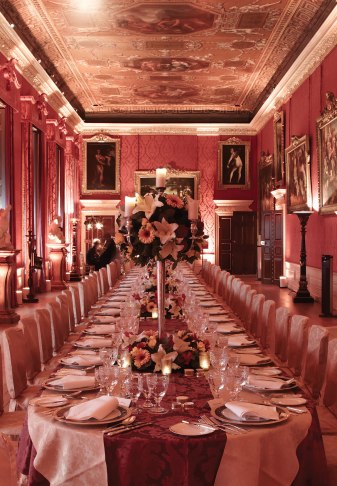 The dining room in the Queen’s Chambers at Kensington Palace

[dropcap size=small]I[/dropcap]t was around midday on June 3 that General Lord Dannatt burst into The Queen’s House at the Tower of London, dressed in the regalia of his office as Constable and pursued by raindrops in battle order. The Tower is a sombre, beautiful and intimidating fortress on the banks of the Thames that was started by William the Conqueror, a Norman king of England who wanted to send a message to his new subjects that he was not to be trifled with. Those who didn’t hear or chose to ignore him soon found themselves being tortured by William’s minions in the basement of the White Tower, the daunting thousand-year-old limestone structure that Lord Dannatt can see from the windows of The Queen’s House, which is actually his house, or at least the place he calls home.  “It is confusing for some people,” saysDannat, rain cascading like a waterfall from the magnificent feathers of histricorn hat. “A royal palace must have one of the Queen’s residences in order to qualify as a royal palace, but most of the royal personages who have lived in the Tower did so behind bars.  I live in the Queen’s house in lieu of Her Majesty, and take care of it in her absence.”Dannat’s task includes looking after the entire Tower of London complex and its ceremonial duties, which include the firing of guns on royal birthdays, weddings and jubilees. Thus, June 3 having been the 60th anniversary of Elizabeth’s accession to the throne,Dannat had a busy day ahead of him.  Before sunset he would need to oversee a 62-gun salute fired to the south, over the Pool of London, a body of water within the Thames where sailing ships of old would drop anchor when global travel meant sails, wooden masts and scurvy. Before issuing the orders to fire the first rounds, Dannat offered his guests the opportunity to inspect his basement, which happens to be the last residence on earth of Sir Thomas More, a saint of the Catholic Church who was executed a few meters from Dannat’s front door on July 6. 1535. 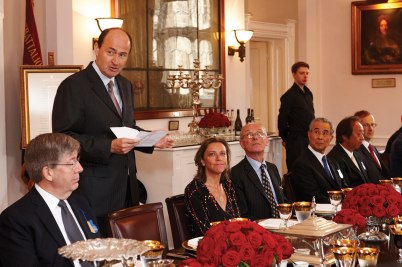 The More cell has an air of mystery and a visit is the exclusive preserve of Dannat’s guests.The general public are not admitted, in part because the site is so sacred, but also to preserve the fabric of the walls. From one corner a tiny window gives out upon a view of the Thames. It’s easy to imagine More standing in this chilly niche, a wistful look on his face, thinking of his home down river and what might become of his family after his execution for opposing King Henry VIII’s marriage to Ann Boleyn. Shortly after More’s death Queen Ann Boleyn checked into the tower herself, a place from which her mortal body would never depart. Her remains are interred in St. Peter adVincula church, along with three other Queens (all killed by Henry VIII) and two Catholic saints – Thomas More is one of them. It is rumoured that Ann Boleyn was the first recipient of a royal gun salute fired from the Tower. “I don’t know we can say that she was the first,” says Chris Martin, Head of Development at Historic Royal Palaces, an independent charity responsible for the Tower of London, Hampton Court, the Mansion House and Kensington Palace. “But the gun salute fired for Ann is one of the earliest recorded, ordered by King Henry in recognition of Ann’s status. Guns have been a part of the Tower’s life since the earliest times and ships that moored in the Pool of London during the seventeenth and eighteenth centuries would pay a fee to the constable of the day to be under the protection of the tower’s guns.” Martin was on hand at the Jubilee because of a unique partnership that the Trust had just cemented with Royal Salute, one of the world’s most prestigious whiskies and the only blended Scotch that begins with a 21-year-old malt. The five-year partnership makes Royal Salute the first brand to be officially associated with Royal Gun Salutes at the Tower of London and in return it will support the work of Historic Royal Palaces, which was foundedin1998.

“We are an independent charity and although we charge entrance fees for the palaces that does not provide enough funding to truly bring the royal palaces to life and conserve them to the highest standards that we have pledged to their owner the Queen,” says Martin. 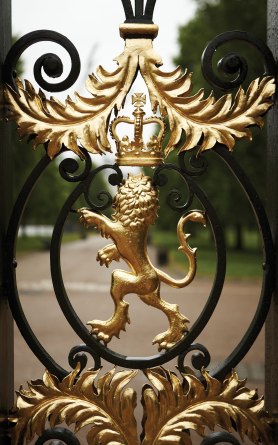 “Sponsorship allows us to do more, such as conservation work on the White Tower, (that had been turned almost black by pollution), the re-presentation of the crown jewels and the transformation of the new gardens at Kensington Palace.” The partnership between Historic Royal Palaces and Royal Salute will be sealed with an officialmarque to be applied to Royal Salute Scotch Whisky bottles, and will allow the whisky to provide unrivalled hospitality opportunities for guests in London. Hence the visit to Sir Tomas More’s cell with the rain drenched ConstableDannat and the unique opportunity to dine at Kensington Palace after the Queen’s diamond jubilee river pageant was complete. Royal Salute’s engagement with the palace’s trust represents a further step in the whisky’s drive to deepen and refresh its relationship with all things regal. The brand has its diamond jubilee next year, having been launched to commemorate the Queen’s coronation in 1953.  Chivas Brothers, the Scotch whisky and premium gin business of Pernod Ricard own Royal Salute and are the global leader in luxury Scotch whisky, with a portfolio that includes Chivas Regal, Ballantine’s and The Glenlivet. Chivas Brother’s chief executive officer Christian Porta had the enviable task of hosting a lunch at the Tower of London on June 3 to celebrate the Queen’s diamond jubilee.

“It was a great day for us to launch the partnership with the historic royal palaces,” said Porta.

“Their mission is to make sure that the Tower of London, Kensington Palace and Hampton Court remain in very good shape and can be enjoyed by this and future generations, and we wanted to support that because of the gun salutes. They are at the heart of our brand and a very important tradition for the palaces.”

Royal Salute’s global ambassador is the 13th Duke of Argyll, who served as a page of honour to Queen Elizabeth from 1981 to 1983. 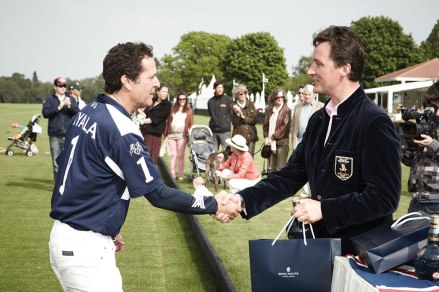 The 13th Duke of Argyll at a Royal Salute polo match

“The queen has an aura about her and the royal family’s ratings are the highest they have ever been,” he says. “We are incredibly proud of what she does and the way she promotes Britain. The new relationship between Royal Salute and the Historic Royal Palaces emphasises and strengthens the heritage of the brand and the connection it has with the British royalty.” The Duke has been one of the strongest advocates of Royal Salute’s sponsorship of polo, especially events at royal locations such as the Guards Polo Club, in the grounds of Windsor Castle’s Great Park. As with the royal palaces relationship, polo, especially when Prince Harry or Prince William are playing, gives what is arguably the world’s greatest whisky blend a chance to make sure its relationship with royalty is alive and thriving, especially among the young royals, rather than a relic of the mid-twentieth century. “We look to the future as well as the past,” says Colin Scott, the master blender at Royal Salute. “There are excitements coming, of course there will be sadness when Her Majesty passes away but there will be great excitement about the coronation of the future King Charles, because that is life going forward.“ Scott has plenty of ammunition at his disposal to make new versions of Royal Salute to commemorate a new monarch or a new royal child. And much of it lies behind the kind of security that once kept Sir Thomas Moore locked up at the Tower. 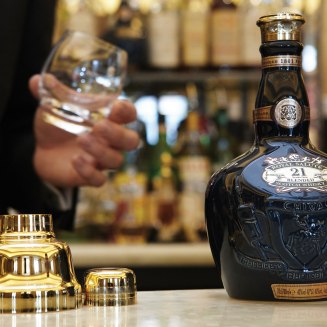 “At theStrathisla distillery we have the Royal Salute vault, which is double locked because the whiskies within are so rare,” says Scott. “We have the Prince Charles coronation preserve, a cask from 1962, aged from 50 years old, maybe for Prince Charles’ coronation. And in 1982 we laid down casks to mark William’s birth and we have blended them together to create a special blend for something, but we are not saying what. Royal Salute is all about celebrations and we are always preparing blends that will be ready for some special occasion.  We are working towards possible great occasions all the time.” Martin’s favourite exhibit at the tower, after the crown jewels, is the collection of King Henry’s armour, which reveal him as a thin young man who gets progressively older and fatter.  Historic Royal Palaces helped to make sure that Henry’s armour could all be brought together. Now that Royal Salute has become part of Historic Royal Palaces they can move on to some other major projects that will ensure the beauty of England’s most regal structures while making them more accessible and educational. “Our most important unrealised project is at Hampton court,” says Martin. “We have two big ambitions. We want to re-tell the story of the baroque palace, which is very important and incredibly beautiful but most people only know about the King Henry VIII part of the building. And we want to construct a newpurpose built conservation centre that hold all the tapestries, flags, paintings and medals that require some work.” Back out in the rain the cannon were ready for duty. Ranks of the artillery company stood by with large brass shell cases. As the thunder began the sun came out for a few minutes, as if summoned by the racket down below. Its warmth seemed to remind those present that royalty is defined by its generosity, longevity, perfection and magic, qualities that Queen Elizabeth and Royal Salute both seem to have in common.