Wealthy Chinese entrepreneurs who once joined golf clubs as a way of celebrating their success are now looking for more exclusive pursuits to define their status. Daisy Zhong travelled to Tianjin for the inaugural Snow Polo World Cup and found that the sport has become a breeding ground for China’s new aristocracy. 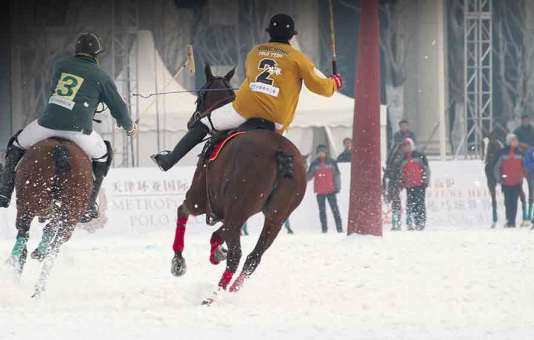 [dropcap size=small]T[/dropcap]he ponies rushed past, just inches away, at a speed of 40km an hour, the powerful thunder of their hooves sending out lightning strikes of sparkling snow as the handsome horsemen dashed across the pure white landscape. As a spectacle, snow polo has an important advantage over the summer game – the white landscape gives the sport the feel of a scene in Dr. Zhivago, a heady mix of romance and high risk.“If you are a member of the elite and you want an elitist sport, then polo is a perfect choice,” says Asad Jumabhoy, a Federation of International Polo (FIP) Executive Council Member. “Everybody can play golf, but how many can play polo?”

Just as golf was 20 years ago, polo and equestrian events in China are characterised by their exclusivity, in terms of the spectators and high-end lifestyle that surround them. And polo’s popularity is set to soar among the country’s growing numbers of sophisticated millionaires.

Tianjin’s Goldin Metropolitan Club is one of the few clubs for the wealthy – and the most opulent among them – that has embraced polo as a lever for elevating its profile and luring China’s high-net-worth individuals.

“There are so many golf clubs around the world. We wanted something more exclusive and special,” says Harvey Lee, Vice President of Goldin Metropolitan Polo Club.

Polo first appeared in China 1,800 years ago, and it gained extraordinary popularity with the Tang dynasty nobility. However, it died out completely during the political turmoil of the 1960s and 70s, when it was condemned in Mainland China as a bourgeois pastime.

Modern polo originated in Silchar, India, where the world’s first polo club was founded with the blessing of Britain’s Queen Victoria in 1859. Prince Albert was its first honorary member, and the club developed the rules of the sport.  In its current form Polo is a game in which two opposing four-man teams on horseback vie to score goals against each other. A handicap system aims to even out disparities between players with different capabilities.

“For me, polo is the most wonderful combination of human being and horse,” declares Jumabhoy. “Horses have been our friends since the dawn of time. It’s wonderful to experience this bond of friendship, to play as members of a team, to feel the speed and to sense the frisson of danger. Also, it’s possibly the only game in which men and women can play on the same team. Polo has so many angles and dimensions that make it a very fulfilling and satisfying experience.”

Jumabhoy adds that Polo’s handicap system makes it a sport that people with different skill levels can play together, although the rating system is complex. The issue of what makes a truly great polo player has long been a topic of debate in the FIP, the international body that represents national polo associations in more than 80 countries. Basically, players are rated according to their combination of team spirit, quality of horsemanship, integrity, adherence to the tradition of polo, the skills of their team, and even their ability to manage winning and losing.

The sport has always been associated with the rich and famous and Kings, princes and the nobility have played the game. Princes Charles and his sons William and Harry in the UK, and Prince Alwaleed Bin Talal Alsaud of Saudi Arabia are great fans. Nowadays, it also attracts a cosmopolitan milieu ranging from Australian media tycoon Kerry Packer to dozens of Hollywood stars like Sylvester Stallone and Tommy Lee Jones.

The other factor is, of course, money. The cost of training a polo pony is far beyond the means of most people. Millions of dollars can be spent on training and keeping horses. Add club memberships, training courses and sundries, such as outfits, harnesses and professional stable boys, and it all amounts to an intimidating amount of money.

Lee says that many European and American players first took up the sport when they were children. Then, they set it aside in their teens, because they had to concentrate on their careers. Afterwards, they returned to polo when they were in their 30s and had become rich.

The bottom line at Goldin Metropolitan Polo Club is hefty and ranges from RMB200,000 for a social membership that gives access to non-equestrian facilities, to RMB10 million for those who wish to become the patron of a polo team.

The high patronage fee is partly due to the fact that a polo pony can only appear in one or two “chukkas” or sessions during a six-chukka match. A patron therefore needs to be able to sponsor a total of 24 to 30 ponies for his four-man team.

And keeping the ponies is very expensive. Those used for the World Cup are housed in the club’s state-of-the-art stable block, which currently accommodates 159 mounts from Australia and New Zealand. It is equipped with central heating, an insecticidal fogging system and an indoor training arena.

According to Derek Reid, the club’s Director of Polo Operations, the basic cost of keeping one horse there is around RMB7,000 a month. Each staff member looks after an average of three and half horses, and it is “one of the best stables in the world”.

But polo enthusiasts also have less-materialistic reasons for loving the sport. Unlike other pastimes favoured by the rich and famous, it involves a relatively high degree of physical risk. It tests the courage of the players, as well as their honour. Sometimes Polo players die on the field, or sustain life-changing injuries. Vets, doctors and ambulances are always on hand to treat both horses and players, who are frequently injured during matches.

“Rich people have the freedom to do most of the things they want, yet the majority of their pursuits are passive,” notes Jumabhoy, “For instance, if you want to buy something like a handbag, you just buy it, or you get someone else to buy it for you. But you need to put your money, your time and yourself into polo. It requires your effort and passion. Every rich guy can do anything, but what makes this sport interesting to him is that he dedicates himself to training and winning. The thrill of doing that is second to none”.. Read more in Quintessentially Asia.