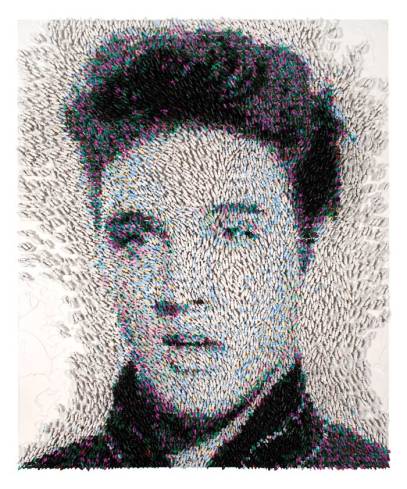 The dawn of the pop art genre in the 1950’s explored the boundaries between art and everyday life, using the vernacular of beverage and soup cans against a backdrop of hectic experimentation.

The genre reached its heyday in the 1960’s where it transfigured fashion, music and design. The era laid the foundation for a new generation of artists who combined a post-modern critique with a complex sense of humour, mixing abstraction with figurative work in an alphabet soup of influences from Aspectism to Yarn-bombing.  Joe Black was born into this post-pop era in 1973 and began his exploration of art by studying sculpture. He then worked as an illustrator, before creating his first vibrant cerebral image that played on the minute to make the ordinary, extraordinary.

Black’s distinctive style encourages the viewer to interpret his playful works by exploring the piece as a dramatic whole, as well as by examining the intricate collection of its parts.

Using a laborious technique of hand painting and altering each tiny item to give gentle lines and shadings to his subjects, Black has pioneered an elaborate new form of pixilation that he uses to hide subtle implications within each of his images.

The iconic subjects of his works are composed of copious amounts of tiny pieces that offer a contextual surprise for observers; his portrait of Joseph Stalin for instance, upon closer inspection is contrived of thousands of hand-painted chess pieces, to signify the Soviet dictator’s ability to out manoeuver his political opponents.

His Hong Kong exhibition, called Readymade includes some important figures from the past, such as Elvis Presley and Grace Kelly. But it also features Chinese artist and political activist Ai Weiwei.

“If I do a portrait of another artist it is tribute or homage to that artist,” he says. “Whether I like their work or not (in the case of Ai Weiwei I do like his work) it is not why I choose to do another artist’s portrait.”

Black says his AI Weiwei work is an example of how he explores what other artists have done, in search of some hidden truth. 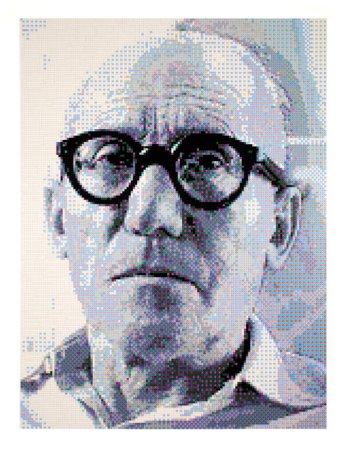 “Throughout art history, artists have always stolen ideas and subjects from other artists and regurgitated them,” says Black. “It is an idea ingrained in the arts and is nothing new. I suppose you could say that reproducing artist’s portraits and commenting on their work using objects within the piece is an acknowledgement of this. “

For Black this process is like scattering letters on a board and allowing others to interpret shape and meaning.

“I’m interested in recognizable portraits and matching them with a material,” he says. “I don’t see it as a criticism nor do I mean it to be one. I see it as an observation. I purposefully leave the artwork and the art statement open to interpretation by the viewer. I don’t like to write statements for my artworks for this reason. They are observations and I don’t like to project a specific view as my work has layers and it is for the viewer to decide a meaning.”

When quizzed on which comes first, the materials or the medium, Black’s approach is uncomplicated.

“It works either way,” he says. “Although it is easier for me to have an object that interests me and then think about the subject matter or portrait, rather than selecting an image and saying I’d like to make it out of twenty thousand platinum encased diamonds.”

Black prefers a more organic process, where the idea grows from the objects he chooses into a theme or subject matter.

“There are some fundamental parameters to what I can and can’t use, but I enjoy the challenge of trying to push these boundaries,” he says.

“The materials do carry a message with the subject matter but I don’t always go for an obvious connection between the subject matter and material. It works best for me when the artwork is perceived as humorous or tongue-in-cheek, but actually beneath that it carries a dark sinister layer that’s not so obvious.” 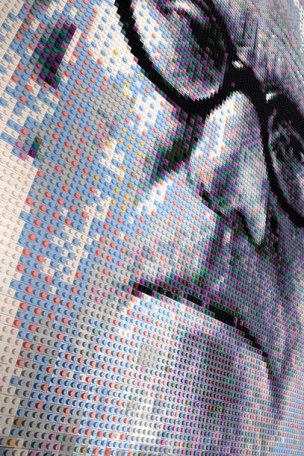 When it comes to inspiration, the current zeitgeist draws Black to his subjects, from a portrait of Russian President Vladimir Putin named Pussy Riot, made with masses of pornographic badges; or of the powerful undercurrent that runs through the thousands of black and white plastic troops that were the raw material of his President Obama piece, which is called Shoot to Kill.

“It could be a quote from the daily news that springboards an idea,” says Black. “If I’m honest I’ve occasionally been lucky with timing as these pieces take a long time to prepare, but the news item that gave me the idea is often no longer current once the piece is finished. I was lucky with President Putin and Obama’s portraits as they both came back to the top of the news agenda by the time the artworks were complete.”

Inward-Outward is one of Black’s more abstract pieces, made from several model planes in a variety of colours. It won acclaim from a source that Black ranks as of utmost importance.

“Personally, I think the Inward-Outward artworks are strong and other artists have recognised them, which is always a good response,” he says. “I’m not sure how well they were received from a commercial point of view. I would like to develop more abstract pieces in the future and play with the object, scale and colour. I’m planning a research trip to China next year as I would like to start manufacturing my own mass-produced objects.”

The title of Black’s Opera Gallery exhibition honours Marcel Duchamp, the 20th century artist and architect who helped create the Dada movement, which re-defined everyday manufactured objects as works of art, including a bicycle wheel, a porcelain urinal (he famously titled “Fountain”) or a glass ampoule (titled “50cc of Paris air’’ simply containing air from Paris). Black’s works are sought after by the likes of Bono, Noel Gallagher, Joséphine de La Baume, Noel Fielding, Russell Brand and Jimmy Carr and are thus garnering increasingly large sums at galleries and auctions, with his Mao (Blue) selling at Christie’s Post-War and Contemporary Art auction last year for $600,000HKD.

“This is my first exhibition in Asia and it will be interesting for me to see how the show will be received,” says Black. “Obviously there are large cultural differences between Europe and Asia and I’m keen to see whether my choices of subject matter and materials work with the Hong Kong audience.”

Black says he experimented with different objects for the Hong Kong show, which he finds often throws up new challenges, like how the objects will work together and whether the construction process can sustain the ideas behind the work. 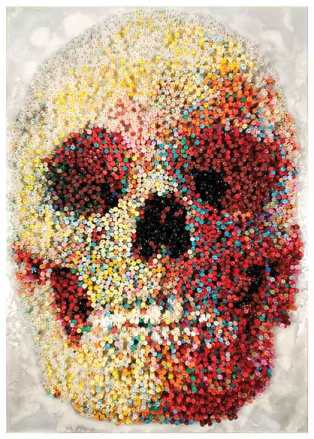 “I plan as much as I can but there are always ways of problem solving as I work on a piece,” he says. “Although the end result of the artwork looks ordered and precise, the working process is often organic with a degree of trial and error. For example, I completely re-painted Weiwei’s portrait three times before I got it looking how I wanted.”

The Opera Gallery will host the exhibition at its Wyndham Street gallery that has more than 4,000 square feet of space over four floors. Gallery Director Shirley Yablonsky describes Black’s work as “…just incredible. You must see it in person to realise its immense magnitude. You want to own one as soon as you see it. Joe is humble and extremely talented, it is very gratifying working with such a great artist and we connected well from day one.”

Yablonsky says Black and his work is a perfect example of Opera’s ethos.

“The gallery is an advocate of the phrase ‘think global act local’,” she says. “We carry our core collection of artists throughout all our locations, supporting their global exposure but at the same time we source and support local artists in each region.”

Yablonsky says the Opera galleries are incubators to nourish the ongoing dialog between internationally established artists and emerging local artists. The exchange as a result of this meeting point is fascinating both for the artists and for the gallery visitors and collectors.

“We have many clients in Hong Kong that visit and know well our spaces in Paris, London or Dubai,” she says. “They are no longer local collectors, but they have become global collectors who make the local scene much more dynamic and evolved than it was just a decade ago.”

And for Joe Black’s role in that success, “We have a very strong interest building up towards the show. When we held the show in London some of the buyers were our Hong Kong collectors, so even before exhibiting here he already has a growing circle of fans locally. Hong Kong collectors have a great appetite for international contemporary art and are keen to follow emerging artists, new movements and innovative works, so I am quite confident the show will be a success.”