As might be expected from an artist who started life as a photojournalist, the power of the image is everything, “You have to shock people. You have to take the people in front of the picture with you and make them feel the emotion.” This uncompromising stance is brilliantly realised in CHAOS, Rancinan’s new exhibition, which had its premiere at the Opera Gallery in Hong Kong.

The impact of the exhibition is percussive from the outset, with a black and white piece entitled Press Power setting the tone. The shot instantly recalls an AP photograph of South Vietnam’s chief of National Police General Nguyen Ngoc Loan, taken as he summarily executed a suspected Viet Cong death squad leader on February 1st 1968, just before the fall of Saigon. Rancinan’s surrealist rendering of the event highlights the dangers of bias and the media’s potentially distracting influence in the era of 24-hour rolling news.

“This picture changed the face of this war,” says Rancinan, referring to the way the image galvanized the anti-Vietnam war movement.  “For me, it’s an inspiration like a Gericault or a Michelangelo painting and a lot more, because this photograph is a testimony of our time and humanity, it’s a universal message.”

His early career provides more than a few clues to his present incarnation as a fine artist/photographer: “I started a long time ago as a photo-reporter, it was another life, another time, one when the press and photographer had lot of power and could change the world, the opinion of humanity, where the press had a responsibility.

Rancinan’s road to celebrity status has been a long one. Born in 1953 in France, by eighteen Rancinan had become the youngest photojournalist in France.

He went to take portraits of many of the day’s leading personalities such as Fidel Castro, Pope John Paul II, Francois Mitterand, Tiger Woods, Yasser Arafat and Bill Gates. At the same time, he was conspicuously successful with his photographic “sagas” published regularly on the front pages of magazines including Paris Match, Life Magazine, Stern and The Sunday Times magazine. He has also worked on a regular basis with Sports Illustrated in the US.

His Chaos series at the Opera Gallery tells the dramatised story of humanity’s battle between social order and chaos, falling into civil and moral degeneration. The exhibition moves between intensely populated tableau of barbaric disorder to the desolated scenes of its aftermath. Influenced by growing social unrest, politics, religion and the Internet, Rancinan reflects his pessimism through his camera. 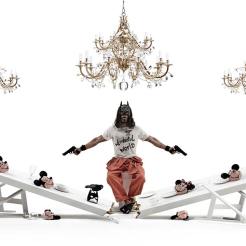 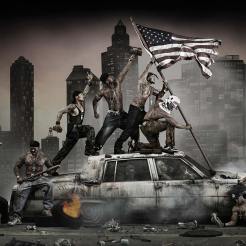 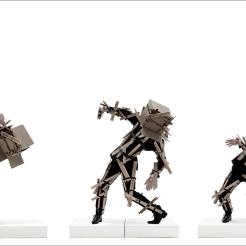 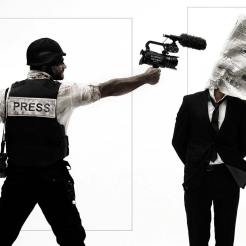 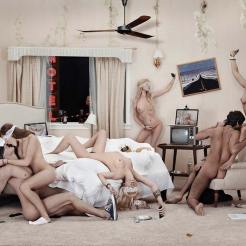 My life on the web ©Gérard Rancinan – Courtesy Opera Gallery 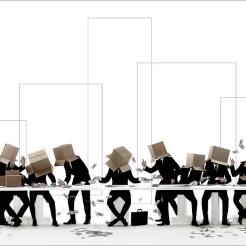 Playing on humanity’s innate voyeuristic tendency, the very act of looking implicates the viewer by inviting their passive participation in this indulgent visual binge of selfie sexuality.

Rancinan describes the somewhat chaotic shoot: “The models came from real gangs of L.A to the set; they were very shy during the shoot like fragile small birds but they stole a few envelopes with money inside that had been prepared for the other models. They cannot change!”

The Feast of the Barbarians on a 5-metre wall features a monumental spectacle of social misfits and taboos, with ironic and possibly profane reference to Leonardo Da Vinci’s “The Last Supper”. Depicting a chaotic scene of subversion and anarchy, Feast is Rancinan’s most audacious presentation yet, featuring over 20 models, rhinos, various skulls, a goldfish and even a Staffordshire bull terrier.

Each separate element is perfectly lit and sublimely staged, yet despite the sexual antics and abundant decadence there is a spiritual emptiness about this bacchanalia. The impression given is almost like an online shopping catalogue, no doubt due to the hygienic precision and perfection with which every character and item is photographed.

Contrasting Rancinan’s graphic series of social disorder, two works Ocean and Still Life depict total desolation in the aftermath of society’s collapse. In these, Rancinan appeals to a minimalist aesthetic to contemplate the void that is left behind by the gluttony of our current existences. Looking further into his crystal ball, Still Life foreshadows the terminal consequences of global overconsumption and waste, while Ocean paints a solemn landscape of humanity’s death and demise.

The filmic quality of much of his work could also, in part, be attributed to his time spent covering movie shoots for such masterpieces as Ran by Akira Kurosawa, Betty Blue by Jean-Jacques Beineix and The Last Emperor by Bernardo Bertolucci. He has also collaborated with writers, journalists, thinkers, sociologists, anthropologists and philosophers.

However, there’s no doubt his early career covering wars, riots and natural disasters, has directly shaped the critical tone of his later work. Rancinan clearly feels this ability to record his perception of reality as a serious obligation: “It’s my principal work.

It’s the most important thing in my life to talk about that. I talked about humanity in the magazines, and now I talk about that in the museums and galleries. It’s my responsibility; an artist has to be engaged.”

His juxtaposition of archetypes with Pop-imagery often crosses the line between high and low art in bleak, often satirical commentaries on social and political issues.

So, who are his major influences? “I don’t like the work of Warhol’s, it’s stupid and ridiculous but I love his intellectual way. It’s a real genius of the manipulation, he is a great manipulator of crowds and spirits, he showed us how the human can be stupid and miserable, before him Duchamps did the same, and today its Jeff Koons. My favorite is the work of Bob Rauschenberg or Paul McCarthy, more efficient!”

In his carefully staged photographs, he references the media, history, popular culture and Western art, playing on theatrical dynamics and exotically bizarre compositions. “So, in fact, I am just influenced by the reality of life, the real events, the news in the news papers, the big shows in the news at the TV, this is a very rewarding show.”

The tenor of his social commentary is generally simple to comprehend: “I mean, I am watching around me and for a big part of our planet (the modern and rich countries) I see a huge amusement park, like a big Disneyland where the humanity want to be happy every time, always! The rich part of humanity seeks happiness for eternity.

They want always more, more and more and that for to go where? Mickey is the symbol this situation, the image of Mickey today is more known than the image of Jesus, Mickey is god!” If one of the tenets of corporate life is “don’t f*ck with the Mouse,” Rancinan clearly hasn’t paid much heed to it.

His unique visions have attracted international attention and recognition. Rancinan’s works have been presented in Paris, Slovakia and Italy and Asia. The photograph, “Batman Girls” commanded a record auction price in London in May 2012.

His work is studied in French schools within the framework of the National Diploma in History of Art. And in 2013, Laurent Fabius, the French Minister of Foreign Affairs, invited Rancinan to display his work “Batman Boys” in the Quai d’Orsay to promote contemporary French artists abroad.

Whether you love his work or the staged perfection of some of his images leave you distanced, one thing is clear – and it has not altered since Rancinan, as young newsman, first took up the camera in his teens; he is true to life. “We have to be modest, and just learn and be witnesses of our time.” To change Gérard Rancinan’s vision of the world, you’ll have to change the world first.