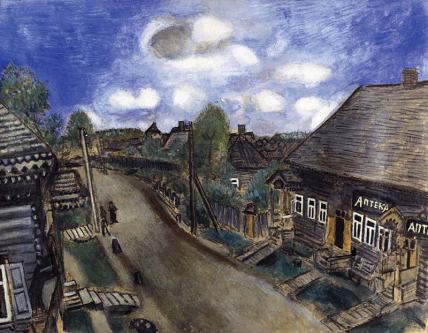 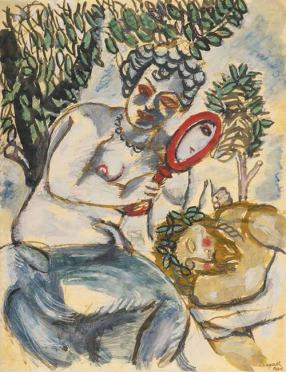 Many people know the work of Marc Chagall because of Notting Hill (1999), the film in which a movie star desperate to be a middle class housewife (Juila Roberts) gives a floppy-haired middle class bookseller (Hugh Grant) one of the Belarus-born painter’s romantic and religious paintings as a casual gift. As first he mistakes it for a schmaltzy reproduction, but then his middle class friends point out that the painting is real, and thus Ms. Roberts’ feelings for floppy must also be authentic. Cue wedding bells and yet another dent in Chagall’s reputation. Ever since his first major exhibition at Berlin’s Sturm Gallery in 1913, where 200 pieces were displayed (and subsequently lost forever during the First World War) Chagall’s supporters and detractors have fought a battle over his reputation.

Was he a genius who should rank with Picasso and Monet? Or a one-trick pony obsessed with airborne figures?When Chagall died in 1985 at the age of 97 Royal Academy president Roger de Guy, the reigning king of British art grandees, wrote “I think he is one of the immortals of the 20th century for very different reasons from those that made Picasso, Braque, Matisse and Kandinsky, and many others of the same sort famous and important. Chagall appealed directly to the emotions by using very simple, almost childish methods and by using subject matter which I think appeals very closely to the ordinary and everyday person.” 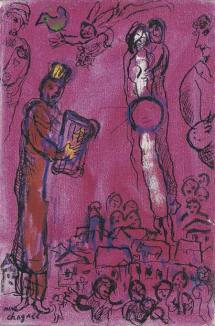 And that has been Chagall’s burden – any painter who has mass appeal tends to be overlooked (or dismissed) by the critics. William Rubin, the curator of New York’s Museum of Modern Art in 1985, was also asked for an opinion when Chagall died. He spoke less kindly, saying, “Chagall hasn’t been an issue in the art world since the First World War. His art is less important for its originality and quality. There aren’t any followers of Chagall.”

Rubin’s comments make a deeper cut in Chagall than appears at first sight. His sub-text was that Chagall, often seen as a follower of Braque and Picasso, had become an artistic cul-de-sac, making off with the ideas of more talented painters and turning them into creative dead ends that would never appeal to other artists.

This idea has followed Chagall ever since. In a New York Times review of a Chagall retrospective at the Wildenstein Gallery 12 years ago art critic Grace Glueck described the 17 paintings on display as “a schmaltzy wallow of beasts, angels, flowers, nudes, harlequins and loving couples.”

In short, although avant-garde movements like Fauvism and Cubism influenced Chagall, he later repudiated them for a lack of humanity, turning his back on urbanism and depicting dream like scenes from Russian villages instead. As a result critics often see him as too sentimental: an artist for the general public rather than the specialist.

“He touches each of us with his dream like and imaginative compositions that seem timeless.”

The Opera Gallery on Hong Kong’s Wyndham Street takes a radically different view and it has backed the belief that Chagall is one of “the immortals” by staging the largest exhibition of his work in Asia for a generation. Picasso once said that, “When Matisse dies Chagall will be the only painter left who understands what colour really is.” The curatorial team at the Opera Gallery have taken this idea to heart and their exhibition, titled A Vision in my dream displays a series of fifteen canvasses in which colours roam like a flight of swallows that have just been freed.

“Chagall’s work is universal and internal,” says Shirley Yablonsky, the Director of the Opera Gallery in Hong Kong. “His motifs of love, war, religion and music are still so relevant and continue to attract fans worldwide. Being one of the greatest artists of the 20th century, his works still inspires generations of artists.”

Yablonsky underlines her enthusiasm for Chagall by pointing to the new tribute exhibition of Chagall’s work at the Musee de Luxembourg in Paris. Called Chagall – Between War and Peace the show seeks to illustrate four key periods in Chagall’s life and work, beginning with the outbreak of the First World War. It opened on February 21 and will run until July 21. It has already attracted hundreds of thousands of visitors. 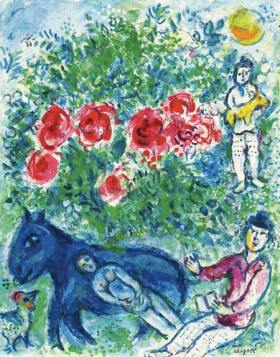 “Last week a 5 month Chagall exhibition at The Kunsthaus Museum of Modern Art in Zürich came to an end,” says Yablonsky. “It featured some 90 paintings and works on paper by the master, proving the he is still as relevant as ever.”

The curator of the Paris exhibition agrees. “Twentieth-century art largely repressed allegory and narrative,” says Jean Michael Foray. “It was because Chagall did not follow the rules and codes (or even dogma) of modernist thought, while drawing nourishment from it, that he was able to stay figurative and bear witness to his time.”

Chagall was the son of a sales clerk who worked in a herring shop. His Hasidic family lived in Vitebsk, Belarus, where he was the oldest of nine children. He studied in St. Petersburg before making his way to Paris in 1910, where he made friends with poets and Cubits painters.

The war and his passion for Bella, the girl he left behind in Vitebsk (and then married), took him back to Russia and he remained there through the Bolshevik Revolution of 1917, after which he was appointed commissar for the arts and taught alongside artists like El Lissitzky and Kasimir Malevich. He returned to France in 1922 and lived there for most of the next 43 years.

This perspective led him to argue that art should nourish itself “exclusively on the elements of the external world, the world of form, lines and colour,” a view that put him at odds with the increasing abstraction of modern art in the second half of the 20th Century. His reaction was to retreat into “the inner world of dream and imagination.”

That inner world is on full display in the Opera Gallery show. In many of the paintings the houses, animals and people have become unmoored, floating in a dream-space of deep, saturated blues, reds and greens. Animals in particular were symbolic of peasant and village life. They also played an important role in the Hasidic cosmology, connecting humans with the universe.

Chagall is often called an “anomaly” in the history of twentieth century art because of the religious content in his work. In an age when philosophers tried to bury God and science was in the ascendancy as a way to explain the universe Chagall was painting rabbis, crucifixions and other Judeo-Christian subjects. 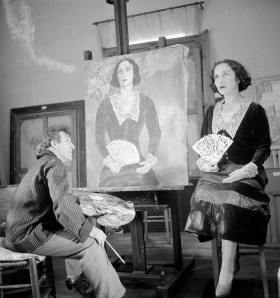 Chagall with his wife Bella in his studio in 1932

“Just as I was accused of descending into ‘literature’ before the war of 1914,” he complained in 1946, “Today people call me a painter of fairy tales and fantasies.”

But it is just this quality that now seems to make Chagall so appealing. His work is often referred to as “timeless” and Yablonsky says this is a tribute to the way he was able to interpret almost a whole century of struggle in a way that was both humane and uniquely his.

“You cannot relate Chagall to any specific movement, genre or group,” she says.

“He lived for almost one hundred years, experienced two world wars and living in exile. He loved with all his heart and was a true poet. His works incorporate so many motifs that people from all over the world, with different backgrounds and culture can relate to it. That for me makes him timeless.”

And apart from poetry, his work is also a good investment.

Chagall is highly collectible and still remains a blue chip artist,” say Yablonsky. “During the financial crisis between 2008-2010 we sold more Chagall pieces than any other master in our collection (which includes Dali, Buffet, Miro, Botero and Picasso). His work is considered a safe and stable investment and with growing appeal to the Asian market, which is acquiring European masterpieces in increasing numbers.”

With Chagall being both artistically popular and financially rewarding it’s likely that this most individual of artists will bring crowds of admirers to the Opera Gallery in the months ahead. He may not be a darling of the critics but if Julia Roberts thinks a Chagall makes a good gift, who are we to argue? 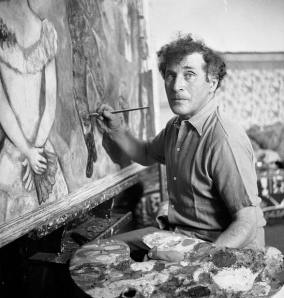 Chagall in his studio in the South of France, near Antibes