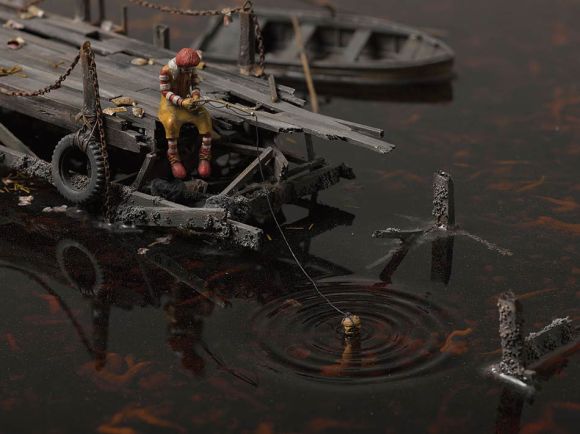 Nailing Ronald McDonald to a cross (hundreds of times)is among the more restrained antics of Dinos and Jake Chapman, brothers and artists who have turned sibling rivalry Into creative genius. The White Cube Gallery brought the duo to Asia for the inaugural Art Basel in Hong Kong – and the city may never be the same.

Hong Kong has never seen a museum quality exhibition of work fromDinos and Jake Chapman but it is part of the White Cube gallery’s DNA to break the mold. Graham Steele, the director of the gallery in the city has no doubt Asia is ready for theChapmans.“We are delighted to bring this exhibition by Jake andDinos Chapman to Hong Kong audiences for the first time,” says the ever precise Chapman.

“Their work, which is at times controversial and always fantastically produced and profoundly rooted in the history of art, will bring a different dialogue to what the creation of an art object can be”.

The Chapmans had a slightly less corporate tone when they spoke to Ria Higgins in London before their flight to Asia. Both of them wanted to talk about their childhood, although not in the way you would expect, although this being the Chapmans it may be exactly what we should expect from a pair who never look at things straight-on. Dinos says, “I was five when Jake was born and although my older sister, Gaby, was excited about it, I wasn’t. My first ambition was to be a zoo keeper, so a part of me was hoping a baby elephant might pop out. There was no elephant, but funnily enough Jake didn’t look too unlike a hairy baby monkey.” 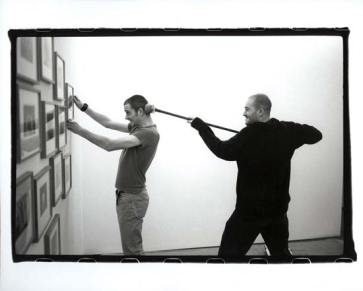 When Jake was still small we moved from Cheltenham to a big house in St Leonards, near Hastings, where we had our own rooms and a huge garden. We kept rabbits and hens, as well as Olga da Polga and Boris, our guinea pigs, Woody and Snoopy, our dogs, and a monster of a cat called Mr Percy, who once took on an Alsatian and won.

If a fox got one of the hens, we’d tell Jake it had gone on holiday, but when it was one of the rabbits we didn’t bother because they multiplied so quickly, he wouldn’t notice. Except there was this one time when Jake and I found a load of rabbits with their heads bitten off, and this time I thought he needed to know the truth — so I told him a werewolf had come in the night, bitten off their heads and sucked out all their blood.

On the whole, our upbringing was pretty idyllic, and Jake, surprisingly, was a happy little boy, into all sorts of things. From about the age of five, he became obsessed with space, so Dad, who was good with his hands, concocted a dome-shaped spaceship in the garden, while Mum made him a space suit with a Nasa sign on the back and a spaceman’s backpack. I’d play numerous aliens, trying to take over his ship, and he’d fend me off with sticks.

Jake also liked playing soldiers, but he’d keep his space suit on and, as Mum wouldn’t allow us to play with toy guns, he’d use a bit of wood instead. She once tried giving us dolls to play with, but we wasted no time burying them in the garden. We were always off in our shorts and sandals, catching butterflies or birdwatching with Dad. And when we weren’t doing, that, Dad was showing us how to make stuff. We both had mini tool sets, so we were forever bashing things together.

The number of times Jake must have shown Mum a bit of wood with some nails in it and said: “That’s for you to put your tea towels on.” The first thing I did with my set was saw the legs off my grandmother’s settee. We also made various attempts at tree houses. Dad would put the cross beams in and we’d hammer in all the other bits of wood. Nails protruded all over the place so our arms and legs got scratched all the time. Of course, whenever Jake got a big scab, he always had to eat it. We’d also sit with Dad making model aeroplanes from those balsawood kits — often getting more glue on our hands than the wood, and spend days painting them. We’d then take them down to the cliffs to watch them fly, only to see all our hard work nose-dive into the sea. So, looking back, nothing much has changed. Dad never said we had to get sensible jobs — so we didn’t.

“We both went to art school, and in the 1990s, when the YBA tidal wave was gathering momentum, we began working together and dared to make the things we wanted to make.” 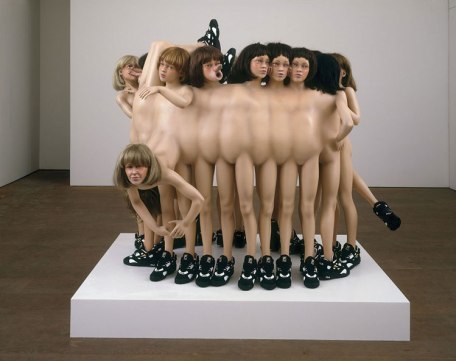 Of course, when Mum and Dad first saw some of our pieces, such as the child mannequins with cocks on their faces, I can’t deny they took some explaining. I’d end up saying they were Jake’s ideas; he’d end up saying they were mine. Not that it kept them away from our openings. There’s nothing as embarrassing as proud parents when you’re trying your hardest to look like cool artists. In the end, we had to ban them otherwise they’d have dispelled any mystique we had left. So today, I can’t imagine what else either of us would be doing if we weren’t artists. We’re in the studio at the moment working on pieces for our Hell sculpture, and Jake keeps sneaking over to see what I’m up to. I’m actually making a mini spaceship, so maybe it’s reminding him of something. 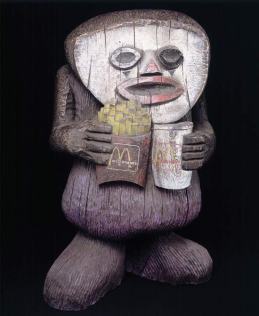 Jake says there’s nothing worse than hearing someone talk about their childhood. It just makes me want to vomit. The reason I get so spiky about it is because people who investigate art always expect it to have a regressive, confessional thread, like you must make these sculptures of soldiers because of something you experienced when you were young. In terms of analysing what we do, I don’t think it leads to anything productive.

Growing up, Mum, whose parents were Greek Cypriot, used to clean in one of the seaside hotels, and Dad, who was English, made fibreglass moulds for things like kids’ slides and art-deco figures. It was pretty chaotic in our house, our mess was everywhere, but on Saturdays, Mum, who worked until noon, expected Dinos, Gaby, and me to have cleaned the house from top to bottom before she got back. So, to get me into trouble, they’d do it in absolute silence, so I’d just sleep on and get told off when she came home. That was f***ing cruel. As we got older, Dinos and I did the usual thing of having our own friends and avoiding each other. We’d pass each other on the stairs and that was about it.

We went to the local comp, which had its share of bad teachers, but I’d still much rather have been f***ed by a comp than by a private school, which just extricates, privileges and separates kids from society. I don’t think I’ve met one person who went to private school that I think is all right. They’re all f***ng idiots. By my early teens, Dinos had just left to do an art-foundation course in London, so the only time I saw him was when he came home at weekends. Once I’d got the six O-levels I needed to get the hell out of school, I went to study art too, only I didn’t want to be an artist — far from it. I wanted to be in a band, and I knew art departments were the places to find band members — nobody who did art actually wanted to be an artist. But I didn’t meet any, and the art just crept under my skin.

It was only when we both finished post-grads at the Royal College of Art in 1990 that the idea of working together first came about. After going through that post-college 40 days and 40 nights of creative angst and artistic barrenness, we found ourselves talking to each other about art and realising that what we had to say was really interesting. Neither of us is that sociable by nature and we certainly never felt compelled to be sociable to each other — the only time we have any social interaction is when we’re both pissed at parties. So I suppose it’s the art itself that throws us together.

When we’re in the studio, our relationship is very intense. What I admire about my brother is the obsessiveness of his thoughts, the repetition of his method and the eccentricity of his outlook. He’s always re-looking, recycling and rethinking what we’ve done before. And that’s the way I like it. If he came into the studio, and said, “I’ve got a new idea,” I think I’d get a stick and hit him. Maybe there’s a bit of the kid brother still in me. The Chapman Brothers will host events on May 17-18 at the Jerwood Gallery in Hastings as part of this year’s Museums at Night. So why is this the time to bring the Chapmans to Hong Kong? Steele has the answer. “To open the show during the most focused period of discussion and viewing of contemporary art in the Hong Kong calendar is a conscious choice to demonstrate White Cube’s commitment to the strongest, most important exhibition programme possible.” So there you have it. And Steele says the dress code for the opening party is Roland McDonald costumes or Nazi uniforms. Sorry, just joking. See there’s a bit of the Chapmans in us all. 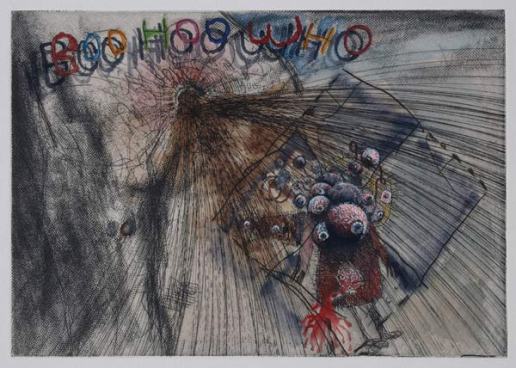