Gilbert & George met at 45 years ago as students, fell in love and evolved into what they call “living scupltures” for whom every act is an artefact of their creativity. With their new Living Pictures exhibition winning rave reviews at the recently opened White Cube Gallery in Hong Kong, John Lyttle paid the duo a visit and tried to separate these danseurs from their dance. 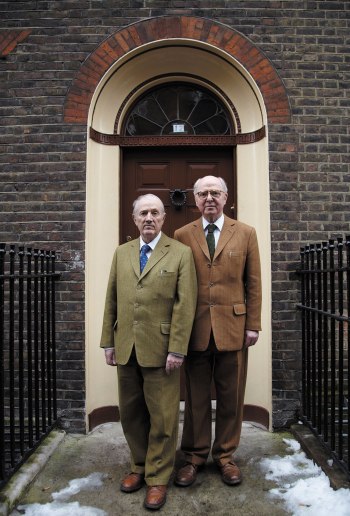 I fear I initially may have given offence while spending the afternoon with ‘living sculptures’ Gilbert (Prousch) and George (Passmore), but once started I couldn’t stop.

Gilbert, the shorter, Italian born and more publicly serious of the two, gets a discomforted look when I ask if, after 45 years since they met as students at the St Martins School of Art, G&G are still in love.

In fact, it’s left to George, bespectacled, impeccably and politely English (although a bit of an saucy imp), to eventually say, “Of course. Yes, Still in love. It was love at the first sight.”

Have they thought about what happens when George dies, or if Gilbert goes first? Not just the possible damage to the fused image that is Gilbert and George, but the human cost to the one left behind without their soul mate? Gilbert answers that they have a foundation in place with instructions on how to manage their (multi million) archive, and I say that isn’t quite what I meant, and George again steps into the gap and replies, “There are always replacements” and delivers his surprising schoolboy laugh. Finally I put down pen and paper and blurt, “Am I being embarrassing?” Both parties charmingly – if unconvincingly – hasten to assure me that I’m not. Besides, as George says, “If we don’t want to answer a question, we won’t.”

Unlike the bulk of Gilbert and George’s output from 1969 (when they painted their faces bronze and sang the vaudeville ditty Underneath the Arches on a tour of art schools) to, let’ s say, 2006’s Sonofagod Pictures: Was Jesus Heterosexual?,  I’m not actually aiming to disconcert or provoke. I’m attempting to avoid the rut interviews with Gilbert and George can lapse into. The rut is partially of their ploughing. Face time with the duo is stage-managed. Perhaps because it’s part of their ‘everything we do is art’ 24/7, 365-days-a-year ethos, perhaps because it’s a PR strategy which promotes the brand whilst maintaining personal privacy at the same time. Commerce or Aesthetics? A little of each?

Whatever, profile after profile proceeds thus…

The interviewer/supplicant appears at Gilbert and George’s three storey Georgian home on Fournier Street in Spitalfields, the heart of multi-cultural East London.

Everyone notes how the dark wood and brown painted ground floor resembles a theatre set before an assistant ushers them through the tiny courtyard at the back with its wall fountain and engraved Biblical verse to the long, tall, white lit studio where Gilbert and George can labour for years on a single project.

In this print factory atmosphere formal introductions are made. The interviewer will probably be shown detailed scale models of the many national and foreign galleries G&G’s work will be hung in. Then the by now ritualistic enquires.

Do they deliberately bait controversy with such taboo inverting exhibitions as Naked Shit Pictures (1994)? Or are they, as George insists, “Moral – our art is moral”? Or do we accept Gilbert’s explanation: “We’re men of a certain age and generation who grew up with strictures about our bodies and the work is sometimes us figuring out – us freeing ourselves – of the strictures”? Round and round we go, where we end up nobody knows.

The trouble with analysing Gilbert and George is that contradiction holds the key and plays hell with the writing. It only kick starts with Weird/Normal.  G&G will tell you they have no theories about their work only to theorise and theorise. They are impeccably courteous in person yet the work is often pure, uncensored Rabelasisian in content. They proclaim ‘Art for All’ while their enormous works sells for enormous sums. 1973’s To Her Majesty sold for nearly two million sterling at Christie’s in 2008.

They are modest in person but in the work (hilariously) enjoy the totemic presence of Gods, rock stars, stain glass Freudian icons. The signature art is epic in scale – photo-based in bold colours, sometimes backlit and overlaid with black grids – yet retains full impact shrunk to postcard dimensions. How?

The art is perilously geographically specific – George famously noted, “Nothing happens in the world that doesn’t happen in the East End”  – but indisputably transcends national borders, classes and tastes.

Are the couple ‘pretending’ when they slip into their tailored tweed suits (uniforms, actually) each morning to be “Weird/Normal” in the manner of ‘creepy uncles’? I’m guessing no: if it was once a performance mask, the mask has grown stuck.

Indeed, they were among the first Western artists to exhibit in China – circa 1993 at the National Art Gallery, Beijing and the Art Museum, Shanghai – and even here new conundrums presented. “Official establishment China embraced us” George remembers with delight. “They raised their glasses and toasted us. Rebellious, young, avant-garde China didn’t like us at all.”

You can appreciate each side’s point of view. Gilbert and George’s big stuff has the unapologetic, grandiose patina of State sanctioned Art, Soviet style. Official China might respond to that surface in one fashion and rebellious China in quite another.

What neither group dug deeper into was the inescapable irony, exploding wit and rich emotion of the pieces: their sheer pleasure in themselves. “We want the viewer to change” says George simply, and simply means it. Change for the better.

I’m here because Gilbert and George’s 292 London Pictures, their largest series since the Jack Freak Pictures, is the Dickensian cum tabloid show that opened the new White Cube gallery in Hong Kong (even the scale model is impressive). This makes more than box office sense. The show’s return to early (almost) monochrome and direct social reporting – Burglar Caught On Spy Camera runs one stark lifted headline- confirms how G&G are arguably not only ‘bigger’ but also more truly understood in foreign climes than they are in England, where their relationship with the critical class has been vexed from day one. 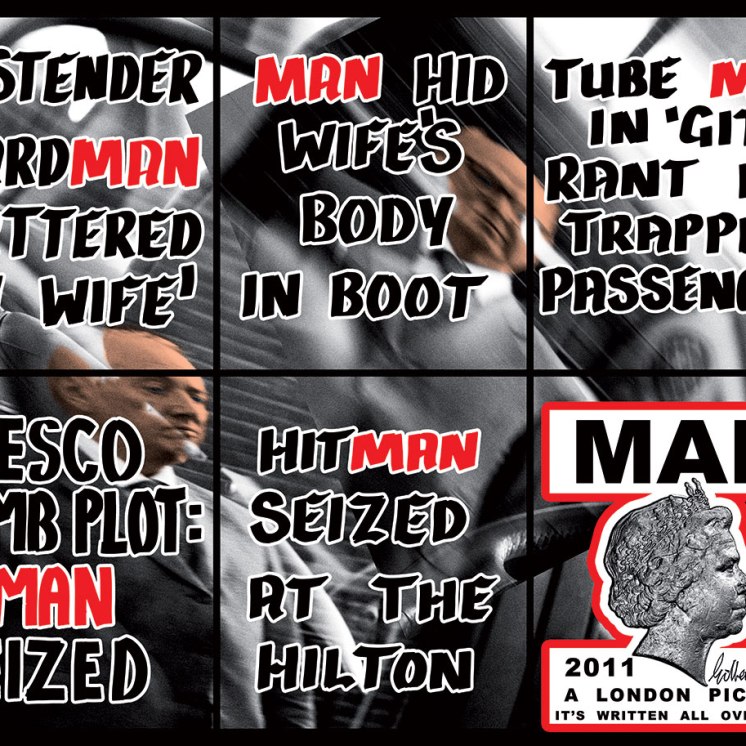 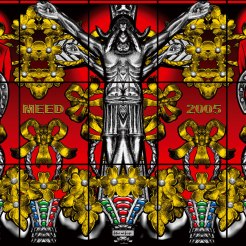 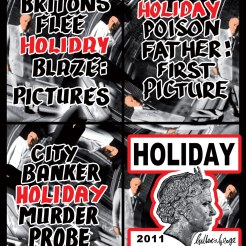 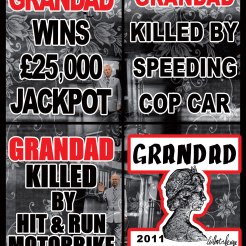 A certain, vocal segment of the Left-by-definition intelligentsia loathes the couple’s admiration of the Queen, their Conservatism with a small ‘c’, dismisses those suits as cynical brand recognition a la Warhol’s blond shock wig, mocks what it perceives to be their narcissism and has often seemed uncomfortable with G&G’s appeal to messy feelings (the hot things) over respectable thought (the cool things), though the truth is Gilbert and George are simultaneously cold and hot. As I say, contradiction is the key. Then there’s their sexuality. The work doesn’t lack beautiful boys, bare bottoms, dirty words.

G&G suspect homophobia lurks behind many an assessment. “Gaudy” says Gilbert, annoyed. “They call the colours gaudy. If we were heterosexual…” If they were heterosexual the high-resolution colours would probably be called strong, passionate, powerful.

Read this. It will oblige us to fall head long into that aforementioned rut but can’t be sidestepped. It’s Sunday Times critic Waldemar Januszczak, who wasn’t even reviewing Gilbert and George when he wrote, “Gilbert and George call themselves “living sculptures, although anyone with eyes in their heads could see that they are actually two fruity gays in suits.”

“That was only the second time I’ve rung a newspaper editor” George says, wearily affronted. “I asked what ‘fruity gays’ meant and I was told it was meant as a compliment.” Gilbert adds, “We don’t go to parties, to premières, launches, museums… We stay away from those people.”

You could dismiss this as the querulous paranoia of ageing men. Despite their youthful vigour Gilbert is 68 and George 70, another contradiction. Except having won the 1986 Turner prize it would take until 2007 for them to be honoured with the Tate Modern Retrospective that almost all of their less nimble contemporaries at St Martins enjoyed well before them. More recently one has only to note the respectful reception of David Hockey’s landscapes at the Royal Academy…

Of course, Gilbert and George’s far greater sin is running right over the critics and straight into the public’s embrace. The man in the street not merely recognises them but  ‘gets’ them as well as any private collector, no matter where in the world the street may be.

One web site dubs them the ‘most exhibited living artists in the world’ and despite a reputation as reclusive or rooted in the E1 postcode, they tour extensively and press the flesh with each fresh batch of work (keep count of the contradictions). Yet I’m genuinely startled to learn that they’ve even been to Hong Kong before, in 2009, courtesy of Louis Vuitton, to reacquaint themselves with one of their privately possessed older pieces as it went on public display. They have fond memories of the white be-gloved bellboys of the Peninsula Hotel and how the 25 year old Class, Militant, Gateway turned out to be ‘a sleeping masterpiece’.

“We have no close friends,” Gilbert says and George semi-corrects. Their beloved assistant followed them back from Shanghai, fan mail arrives from children who know playfulness when they see it, rude postcards come from rude young men and old people stop them to say how tickled by their irreverence.

The telephone rings regularly. And I suspect the Internet has allowed them what they might have always been striving for in their art: the ability to reach out and touch while maintaining the distance to contemplate and the retreat to be together, alone, creative, happy in their workaholic universe.

“Do you ever disagree?” I suddenly find myself asking, hopelessly circling back to embarrassment. Perhaps it is all an act, a stunt, spin, a con trick. “No, no, never “ Gilbert says. “Not once?” Insisting makes me feel terrible after all their hospitality and good humour. “Not even about the placement of a figure or the crop of a shot? Surely at the beginning…” “Never” George echoes and doesn’t bother with a sideways glance at Gilbert. “Two people, one artist, one vision.”