TheFashionableTruth
The latest edition of SIGNED, published by deluxewords, parent company of The Fashionable Truth is released today. The high-profile magazine is devoted to creativity in all aspects of design and is produced for the Hong Kong Design Institute – the theme of the latest edition is “Ingenuity”.

One of the highlights in this edition of SIGNED is a feature on the work of the product and furniture designer Boris Berlin and his “philosophy of silence”.

Berlin’s approach is based on the idea that designers are egoists who try to do too much, forcing materials into exaggerated and unnecessary forms to suit their own ideas and ambitions. 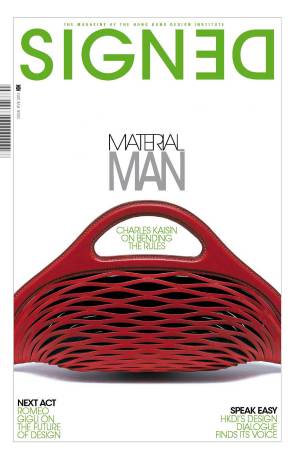 The edition also has an interview with Thomas Coldefy and Isabel Van Haute, who were the architects responsible for HKDI’s award-winning design, and the cover-feature is focused on Charles Kaisin, the Belgian designer who is renowned for his innovative treatments of paper, wood and leather.

In Straight Talk eminent local designers such as Henry Steiner, Douglas Young and Tina Liu discuss the obstacles that face Hong Kong designers as they seek to make the city a centre for creativity in Asia.

According to Young a key issue is that the Hong Kong government “lacks taste” and has an “insufficient ability to take risks” which prevents it from being a powerful patron of designers.

Steiner argues that the city’s “multicultural and anarchistic” values encourage creativity but both men agreed with Tina Liu who said that Hong Kong designers must do more to be successful on the Chinese mainland. Also featured are exclusive interviews with Romeo Gigli and Yohji Yamamoto.