Boris Berlin co-founded Komplot Design in 1987 with Poul Christiansen and in 2010 he joined with Aleksej Iskos to launch Iskos-Berlin Design. Together the two companies have focused on creating inspirational works that act as an antidote to the excessive noise of modern culture, expressing a “philosophy of silence”. 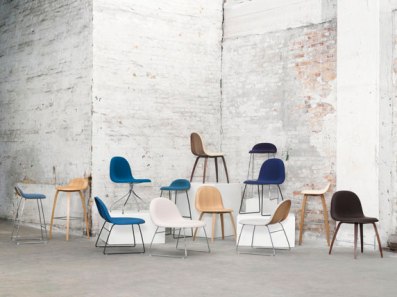 It can be painful to be a designer, especially one like Boris Berlin who wears his heart on every surface he touches when he’s composing a new object. Berlin’s agony is focused on his disdain for uniformity, the process by which commercial pressure and the frenetic superficiality of modern life have stripped many designers of their will, leaving them powerless in the face of conformity. His answer is to seek for poetry in the materials he uses and make that serve the cause of originality.

“Designers and the companies that they work with are like salesmen in a market full of little booths,” says Berlin, who was born “by chance” in the former Soviet Union but has lived and worked in Denmark for the last three decades.  “They always want to see what is being sold in the neighbouring booths. If tomatoes sold very well, then they will come with tomatoes the next day. They always copy each other, and very few of them have unique visions. It leads to the situation that people more or less do the same stuff.”

For Berlin it’s surely not a coincidence that the two words “listen” and “silent” consist of exactly the same letters. Silence is an important part of listening, and without it effective communication is impossible. In our “highly productive” era when everybody seems to be churning out immense quantities of words, designs, and art, it sometimes feels like we are being drowned in a sea of irrelevant homogeneity.

Like Aldous Huxley in Brave New World, and Neil Postman in Amusing Ourselves to Death, Berlin sees this process as dystopian and likely to increase the absence of meaning in modern design. His passionate response to those designers who pay more attention to showbiz and the gossip columns, rather than creativity and functionality, has been to design a very unassuming chair called NON that fits unobtrusively into every surrounding, and whose structure is so simple it could be drawn by a five-year-old.

The sheer simplicity of the NON chair has elevated it to a work of art with a message that makes it the sibling of literature and a cousin to Huxley’s great novel. Its purity is a warning against the corruption of creativity in design, executed with a mix of indignation and humour. Also embedded in NON is Berlin’s hope that his design will act as an antidote to the poisoned cacophony ingested by modern society. To his delight, the world seems to have lowered its noise level in order to listen to what his silent object is trying to say. 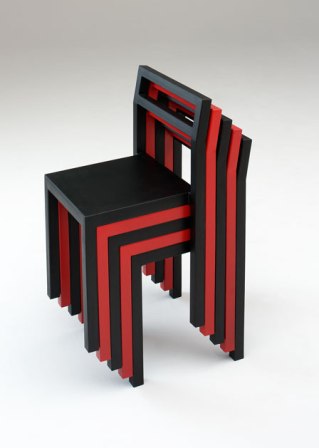 NON is a monoblock chair, moulded in PUR-rubber in one shot

Adding to NON’s appeal as a work of art combined with a polemic is the chair’s ingenious use of materials. It is a comfortable monoblock chair molded in PUR-rubber in one shot without any joints. Berlin explains how the choice of material has enhanced the chair’s appearance and success, “There is a paradox in it – the silent normality of the shape combining the novel use of the material has created a strong and easily recordable identity.”

The non-design and non-doing attitude constitute the first parts of the philosophy of silence practiced at Komplot and Iskos-Berlin Design. “NON is not even a designed chair, it is just an archetype for the chair. Yet it is monumental, a milestone,” Berlin says.

“If I am going to make a new design, I need a good excuse. Otherwise, I won’t take up a new project.”

After the success of the NON chair, Komplot designed another quiet and simple chair called

GUBI I that used an innovative technique of molding a 3D veneer invented by German company Reholz. GUBI I became the first industrial product based on this new technology – what Berlin would call a good excuse for him to make a new design.

GUBI I’s edgy innovation lies in the use of 3D veneer that allows a significant double curvature of the shell. It makes possible a radical reduction in the amount of wood used in making the chair, which has a seat-shell thickness of just 5mm, compared to the normal 10mm or more. The new technology also enhances the 3-dimensional nature of the shell because it forces all the edges away from the sitter, making it comfortable to sit on. Moreover,

GUBI I revealed another important aspect of his philosophy of silence – non-doing is only a start, and it has nothing to do with being indolent or passive. On the contrary, one should always experiment with new materials, and actively look for “excuses” to make a good design that could make the world sit up with awe and surprise.  It also helps if the design uses few materials, making it more sustainable.

Berlin says, “I always spend a lot of time at the factories. I am always looking into the garbage bins, under the machines, because there are always strange and interesting pieces lying there. And the rejects from some products are so beautiful.” It is this infatuation with materials that led Komplot to create GUBI II based on the use of a new material called PET felt that has become a key component to their designs, helping to further develop the philosophy of silence.

PET felt is a 100% recyclable material made from used water and soda bottles, thus GUBI II, for which the new material was first employed in furniture is an eco-friendly chair because the seat and back are made entirely from PET felt instead of wood. Before long, Berlin discovered one of PET felt’s stunning characteristics – it can be used as a construction material without help from any reinforcement.

“This discovery made me high. It is a dream to make a piece of mono-block furniture consisting only of textiles, in which the upholstery has become the self-supporting structure.” Berlin says, his voice tinged with the excitement of a man who has made a genuinely new discovery.

It was natural for Komplot to deploy PET felt as the perfect material to meet all the “impossibilities”, and immediately a sketch was created, based on which the famous NOBODY chair was made by the Hay manufacturing company, after the Swedish prison service changed its strategy and closed the project. The manufacturing process is amazingly simple only needing, “the felt to be put in the press tool, then close the tool, cool it down, open the tool and trim the pressed item. That’s it.” 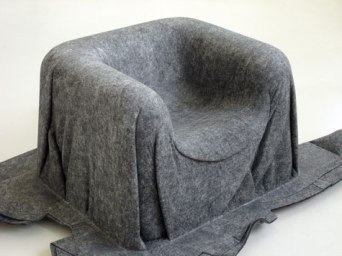 The NOBODY chair is a chair that has no body, consisting only of textile like a piece of cloth laid over a chair to cover it. It is light, stackable, sustainable, and Hay market the chair with the tongue-in-cheek phrase “Nobody is perfect”.  However, on the way to perfection, Berlin spent a whole year finding ways to eradicate the wrinkles on the chair that were incurred during the thermo pressing process. And this yearlong process has triggered new thoughts regarding the ethics of design in a world where natural resources are often exploited to the point of total depletion.

Berlin’s journey to make the NOBODY chair has led him to see the philosophy of silence as a stance that calls for designers to do less, and to leave their egos out of the process while treating materials and products with a harmonious and peaceful state of mind based on sympathy and tolerance. Berlin says this approach involves a “loss of control” and is something that allows materials to do more in deciding their destiny.  “It is part of the ego of a designer to make materials behave as he wants them to, and things that don’t are relentlessly rejected. And the history of design is nothing but an attempt to conquer the material world,” Berlin says.

“We only need to control as much as we need to satisfy the function of the object, and the material will do the rest and behave as it wants.”

Berlin especially criticises the practice that rejects products with small imperfections such as a patch of discoloration in a piece of wooden furniture, or a little red thread in an otherwise perfect piece of black fabric. “What a terrible intolerance all of us have,” he adds indignantly.

In light of this, Iskos-Berlin designed the Spook chair and TUTU lampshade using free molding, a technique that doesn’t force the materials into shapes they don’t want to assume. Spook is a monoblock club chair produced in one single process by thermo pressing the PET felt. Instead of fighting against the wrinkles created by the pressing process, designers accept the way the felt wants to behave. As a result, each chair is unique, because the folds never fall in the same way. Not only the wrinkles are forgiven, but also they reinforce the chair and allow for a reduction in the initial thickness of the felt. The TUTU lampshade’s design has made the whole manufacturing process shorter and simpler, because “you don’t have to trim it after the pressing. Just press, and you are ready.”

To spread the concept of “lost control”, the Iskos-Berlin design company that Berlin co-founded has created an exhibition in Denmark last year based on the theme, aiming to alter people’s way of thinking, “to change the perceptions rather than trying to change, improve or perfect the world around us. It demands a paradigm shift, a change of our aesthetic point of view.”

Berlin’s work is a stark reminder to designers that good design often has nothing to do with headlines but should be focused on a better and more humble use of the planet’s resources. If more designers followed this path that would be a Brave New World indeed, one in which design and a sustainable future for the planet were both part of the same dance.