When John Galliano ran Dior he was a Godly figure worshipped by his boss, LVMH chief Bernard Arnault. After he fell, dashed Satan-like into dark obscurity, the Parisian fashion house waited almost two years before elevating another to its saintly throne, but now it has Raf Simons and there is talk of a new Messiah on Avenue Montaigne. Tamsin Blanchard reports.

Tiny, brightly coloured Swarovski crystals had been painstakingly applied to models’ eyelids, as if they were simply another accessory to be decorated, like a shoe or a jewelled bag. Some were light chartreuse, others orange or sky blue. ‘Red and orange could be nice,’ said Pat McGrath, the British make-up artist who has been in charge of painting models’ faces and lacquering their lips at Christian Dior for the past 14 years. ‘Do you like it?’ She was talking to one of her team members.

They decided to add in some more colours to the mix. It all seemed very spontaneous, although the look of the make-up would have been decided well in advance of the show. For three hours McGrath and her team, along with the models and her partner in crime, the hairdresser Guido Palau, and his team, had been in the backstage area of the pavilion that had been erected for the sole purpose of showing Dior’s spring/summer 2013 collection. The show was not for another two hours, but there was a lot to do before then, not least the transformation of 53 models into what McGrath called ‘techno butterflies’. That, she said, was her brief. ‘It’s wonderful,’ she observed. ‘We are playing with lots of shimmer eyeshadow, lots of paint, lots of crystals, some matching, some clashing.’

Outside the pavilion in which McGrath toiled a monolithic facade, which had been built in front of the Hôtel des Invalides in Paris’s 7th arrondissement – still a working hospital as well as the burial site of Napoleon Bonaparte – gave no clue as to what was going on inside. 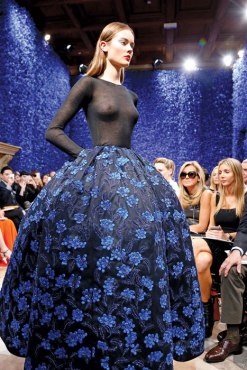 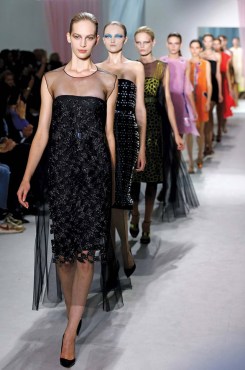 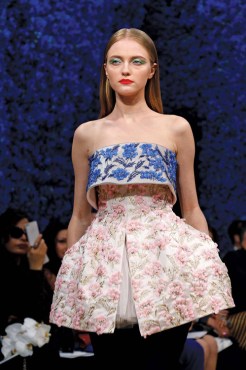 The vast architectural structure with the Dior logo at its centre was framed by a bright sky. Inside, the space had been divided into four more intimate salons, each one white and light and airy, with windows allowing you to see into the next room. Over the open windows, gauzy curtains in shades of pink, pale blue, green and yellow blew gently in the breeze after being carefully steamed to remove any creases. Rows of spindly chairs had been laid out – each one painted matt black instead of the couture gold that guests of Dior might have expected in days gone by. A seamstress at a sewing machine was busy, hidden in a corner of the pavilion, running up lengths of white curtains to partition off the backstage areas from the front of house as fast as they could be hung. Men up ladders were working on the last touches – wiring monitors, adjusting lights, putting up diagrams to show the models the route they must walk.

For Dior, whose business recorded bullish revenues of £6.9 billion for May-July 2012, this was a really big day – the start of a new chapter; the first ready-to-wear collection by the Belgian designer Raf Simons, 44, who was handed the thorny Dior crown last April. The house had spent just less than 18 months in fashion no-man’s-land since the departure of John Galliano, who was fired in March 2011 after his drunken, anti-Semitic rant in a Paris bar.

Simons showed his first haute couture collection for Dior in July. In the early 1990s he had studied industrial design and worked as an intern with one of the original ‘Antwerp Six’ designers, Walter Van Beirendonck. A self-taught menswear designer first and foremost (he launched his own menswear label in 1997 using models cast from the street in Antwerp where he was – and still is – based), Simons finessed his rigorous modernist approach towards womenswear as the head designer at Jil Sander for seven years.

“What I find amazing is that Dior is a beautiful house where I can make clothes to make women happy,”

says Simons.“My mother was a cleaning lady, and my father was a night watchman in the army. And now I stand in this world, and yes, it’s a bourgeois environment, in a house that’s seen in France as the most important position in fashion, along with Chanel. But I don’t care about that.

Simons work at Jil Sander proved popular both critically and commercially, laying the path toward his minimalist ascendancy at Dior. His often-skewed vision of modern luxury has included making everyday carrier bag shapes out of leather and clear plastic, and giving clothes for both day and eveningwear his own pared-back, minimalist spin. 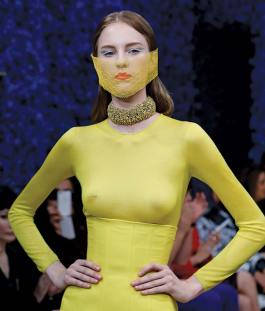 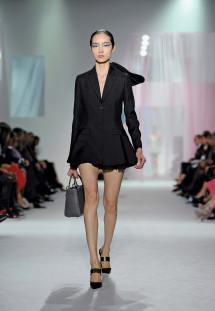 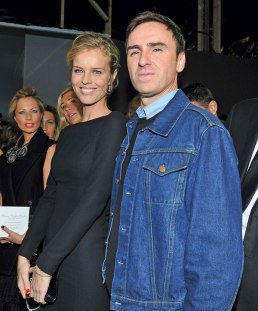 Raf Simons with Eva Herzigova at his debut Couture show

His appointment at Dior signified a clean break for the house, a new direction away from the historical romance and endlessly researched complex narratives that were often the thread that held Galliano’s technically spectacular collections together. For Dior, Raf (fashion insiders like to refer to him simply by his first name) is the future, and it would seem Simons agrees. In one of his first public interviews since taking the job, Simons made clear where he stands with regard to his predecessor.

“I have so much respect for John [Galliano]’s technical skill and the fantasy, it’s just something that I don’t find relevant now, especially when it restricts a woman, because in every other area they have so much freedom,” he told Vogue Australia.

At Simons’ first Dior Ready to Wear show the work done by the hair team gave some clear hints about the Simons’ aesthetic. There battled with three monster-sized suitcases, each filled with hairpieces in every shade imaginable. But for the show the models’ hair was as clean and simple as it is possible to be – a beautiful, sleek ponytail just above the nape of the neck. The hairpieces were there just to ensure everyone was sporting a ponytail that was uniform in length. “It is very minimal, very unreferenced,’ Guido Palau says. ‘The ponytail is about the future but not futuristic. It indicates a forward-thinking kind of woman.’ Palau said his role is to support Simons in his vision.

At 11.50am food arrives. The production team and models, many with their otherworldly bejewelled eyes, gathered around the table. During Fashion Week, days are long and you never know when you might next have a chance to eat. And contrary to popular thinking, models do eat. As she munched on a dainty vegetable wrap, one model told me the crystals felt as if she had a facemask on round her eyes. There were slices of raw vegetables, little towers of sandwiches held together with cocktail sticks, small pots of quinoa salad, and bite-size rolls filled with foie gras. In front of the food table there was a makeshift studio set up with a photographer taking pictures of the models in their strange state of civilian clothing and full make-up. Sunglasses were being heated and carefully moulded to fit the models’ faces.

The man in charge of the production of the show was Alex de Betak, whose company, Bureau Betak, will produce 14 shows this season in New York and Paris. De Betak had a headset permanently attached and a stopwatch around his neck. There is a constant conversation going on in his ear as he prepared for the rehearsal. One of his team is busy walking small groups of models through the rooms to brief them on the route they will have to take to ensure that every guest in the four rooms – all 1,500 of them – gets to see each outfit. Everyone has to wear white overshoes to stop them making the pristine Dior grey carpet dirty.

As they snake their way around the venue, they pass the programmes, which are being neatly placed on every chair, each one beautifully handwritten with the name of a guest, from Sidney Toledano, Dior’s president, to the celebrity clothes horse and H&M designer Anna dello Russo, the photographer Cindy Sherman, who has a show in Paris, the Chinese actor Yu Xia, Kanye West, Robert De Niro, Azzedine Alaïa, Christopher Kane and his sister, Tammy. 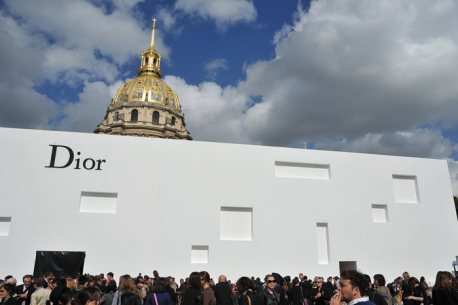 At 12.27pm the milliner Stephen Jones arrived. Jones is part of the Dior furniture. He has worked for the house for 16 years. Simons is not someone you might associate with hats. Jones has created a series of beautiful blowsy neck bows out of silk gazar in red, black and pale pink which, he explains, is a couture fabric and very difficult to work with. He also came up with the idea to put veils under the sunglasses. ‘Raf loves veiling. He doesn’t say “wow”, he just nods. He’s not one to waste his words. He is very succinct, clean and clear, like the clothes.’

At 12.40pm Simons appeared. He was wearing a pair of dark blue suit trousers with a blue shirt and a navy jumper and denim jacket over the top, which turns out to be a bit of a vintage number from 1996 by the king of minimalism, Helmut Lang. Along with Martin Margiela (a fellow Belgian, one of the Antwerp Six who changed the course of fashion with his deconstructed inside-out and back-to-front raw-edged clothes in the early 1990s), Lang was a big influence on Simons with his uncompromising modernist collections.

Simons is tall and slim, almost gangly, with dark eyebrows and a boyish look about him. He looked very calm, relaxed and happy, greeting Palau and having a chat, before kissing de Betak on both cheeks. They all take their places on seats reserved for press and VIPs, Simons with his right-hand man, Pieter Mulier, and Michel Gaubert, who is responsible for the music. Music is an important element for Simons, who grew up listening to records from his local record shop in Neerpelt – his early purchases included Bob Marley and Kraftwerk.

Backstage there was a flurry of activity as the girls were given the shoes they will wear in the show. They were very high, with a comma-shaped heel and very fine straps fixing them to the feet in a range of acid, metallic and bright colours not dissimilar to the technicolour eye make-up. And then the music began: heart-vibrating, relentlessly electronic techno house. It sounds as if we are in a nightclub, which is Simons’s intention.

The first girl, Daria Strokous, strides down the runway, a natural in the shoes with her oversized mustard jumper and skinny leather jeans. The rest of the girls followed, walking through the empty salons as the team tapped their feet to the music and Simons jumped up every now and again to talk to one of the models or to adjust a curtain that was in the way. By 13.12 the rehearsal was over.

By 2pm, half an hour before the show was due to start, the guests began to arrive and take their seats. According to the programme notes, Simons had based the show on ‘themes of liberation’ with a reworking of Dior classics like the Bar jacket and Ligne A dress.

At 15.01 the atmosphere vibrated as the music kicked in and the show began, and in fewer than 15 minutes it was all over. Sidney Toledano led the surge backstage, and within minutes Raf Simons was hidden behind a mob of well-wishers, camera crews, fashion editors and photographers. As Simons and the media frenzy move outside the tent into the open air, the team of dressers were busy packing up the clothes, wrapping the future of Dior in cellophane bags and boxing up 53 pairs of exquisite shoes.

A huge cheer erupts from the hair and make-up area, and models crowd around mirrors, rubbing the crystals from their eyes ready for their next appointment. It was a memorable day for Dior and one upon which they hope the slate has been wiped clean.