The bond between fashion brands and artists is usually a marriage of convenience but the “Lady Dior As Seen By…” project that celebrates the Maison’s iconic bag is an honourable exception. Daniel Jeffreys reports. 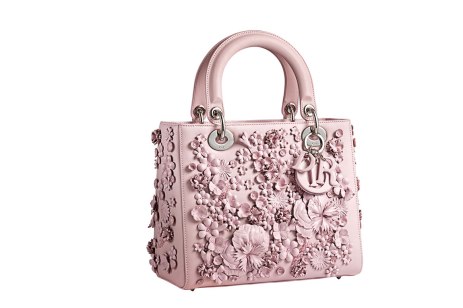 From the beginning Art influenced Dior’s creations, and it’s not hard to see signs of Picasso, Renoir, Modigliani and Cezanne in his work. He named some of his collections “Matisse”, “Braque” and “Picasso”, decorating them with the same vivid colours and contemporary spirit adopted by the artists. In 1950, Dior co-operated with Dali to create an installation called “Costume for the year 2045”, which featured a peculiar aqua green, silk jersey dress.

In 1928 Dior was a 23-year-old graduate majoring in political science at the École des Sciences Politiques in Paris who was smitten by a deep infatuation with art and architecture and made a decision that disappointed his father, who wanted him to become a diplomat. He dropped out of school, opened a small gallery in Paris and started selling works by the as-yet unknown artists like Salvador Dali and Alberto Giacometti, as well pieces by Georges Braque, Pablo Picasso, Jean Cocteau and Max Jacob. A few years later Dior opened a fashion business and in 1947 he exploded onto the Parisian scene with designs that were bursting with femininity and luxury, establishing his status as the most successful couturier in the world. His first major collection has often been described as “sculptural”, and no wonder. It had been inspired by his relationship with artists and artistic creativity combined with a fascination with the human form was woven into every thread of his creations.

Thus while many luxury brands have chosen to collaborate with the art world for reasons of image and marketing, Dior was born with an artistic disposition, and commitment to art is at the heart of its DNA.

Today the romance between Dior and art remains strong. Raf Simons, the current creative director, was also a former gallery owner and he has named his designs after artists Christian Berard, Bernard Buffet and Picasso, proclaiming: “art is at the centre of everything”.

Sometimes when it comes to exquisite craftsmanship it’s difficult to draw the line between luxury and art, and it seems particularly so for Dior. Not only have Dior’s designs been inspired by art, but also vice versa. In winter 2008 Dior partnered with the Ullens Centre for Contemporary Art in Beijing to hold the Christian Dior and Chinese Artists exhibition, with 20 commissioned artists presenting pieces inspired by Dior’s most prominent codes such as the Tailleur bar jacket, the façade of its avenue Montaigne headquarters and Dior perfume. The event signified a dialogue between art and fashion, the first of its kind in China. It also showcased a new era of support from the luxury world for contemporary Chinese art at a time when there were increasing signs of a renaissance in the country’s creativity.

In 2011, an exhibition organized in Shanghai gave carte blanche to some fifty artists and photographers with the sole brief being to reinterpret the famed bag through the prism of art. From David Lynch and Martin Parr, to Olympia Scarry and John Cameron, over seventy artists have by now photographed, painted, or exalted and Lady Dior As Seen By subsequently travelled to Beijing, Tokyo, Milan and Sao Paulo. The exhibition visited Hong Kong last year and featured more than 100 pieces of work from international artists such as David Lynch and John Cameron Mitchell as well as local artists Annie Wan Lai-kuen, Kum Chi-keung and Bovey Lee.

“The bag itself is an object full of stories, it is attractive because it has transformed into an object that’s about memories and legends, and it inspires people to meditate on its meaning.”

The exhibition was at the Accademia di Belle Arti di Brera in Milan in 2102. In continuing to reinvent itself, the Milan leg of the Lady Dior As Seen By exhibition called upon young artists from the Accademia di Brera to create a work inspired by the Lady Dior. Twenty-four initially presented their ideas to an international jury made up of museum directors, critics and art historians. The selection was whittled down to Davide Stucchi and Alessandro Carano, who get to show their work alongside the great names in contemporary art and photography.  Stucchi transformed the Lady Dior into a pinhole camera – the ancestor of our own modern version – the second gave it the starring role in an animated short exploring the notion of the fairy tale.

Indeed the way the bag gained its coveted status is a fairy tale in itself. First introduced in 1995, it was given to Princess Diana by Bernadette Chirac, wife of former French president Jaques Chirac during their visit to the Cezanne exhibition at the Grand Palais in Paris. She immediately adopted the handbag and then ordered every edition of it.

In 1996, with Princess Diana’s consent, the handbag was renamed the Lady Dior. The name “Lady” was used because Diana inherited the title from her father Earl Spencer and was called Lady Diana Spencer before her marriage to the Prince of Wales. The bag has since been associated with some of the most beautiful women in the world, from Carla Bruni to Diane Kruger, Monica Bellucci and Marion Cotillard, and later joined by Fan Bingbing.

The bag, created from 95 fine processes, is characterised by a topstitched cannage pattern, lambskin and the letters D.I.O.R forming a charm pendant.

“I would describe it as a timeless and classic piece. It is intimate in scale with a strong structure yet still undeniably feminine,”

says Bovey Lee, a cut paper artist. Her work, The Lady Dior, is a replica of the bag in cut rice paper with hand cutting that touches every detail of the Lady Dior while flattening it in two dimensions.

“As a cut paper artist, I am drawn to materials, patterns, and details. It was the unique diamond/octagon pattern and stitches that I found most attractive. I also liked the contrast between the soft, supple leather and the strong, metal hardware, which I found inspiring.”

Artist Annie Wan’s interpretation of the bag for the Hong Kong leg of Lady Dior by… is called Lady Dior Impressed and is a “negative” sculpture in white porcelain.

“It is an impression of the leather surface. Such a delicate, unusual copy of the bag appears to us between the familiar and the unknown. It exists to make the owner think about her everyday object, which carries her own, personal stories,” says Wan. 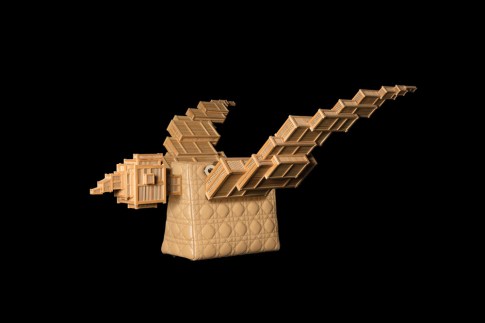 Kum Chi-keung, an artist whose sole creative language is birdcages focused on the handbag’s craftsmanship, where he made a happy discovery. “When I first looked at a Lady Dior bag, I was surprised to find that the cannage pattern on the leather surface carries a striking resemblance to a birdcage.”

The cannage pattern on the Lady Dior bag has its inspiration from a Napoleon III chair, which Christian Dior used in his 1947 fashion show to entertain noble guests. Kum, meanwhile, has been experimenting with ways to expand the artistic possibilities of a common birdcage by varying its size, design, material and placement. The horizontal and vertical lines on the bag have linked the luxury design and Kum’s creative muse together.

This time in creating Lady Bird, he re-interpreted the Lady Dior bag as a bird sculpture made of bamboo. For him the strange flying creature is the record of the state of his mind when he encountered the Lady Dior.

“I have tried to dismantle a Lady Dior bag, discovering that it’s highly sophisticated inside, with traces of the production process almost invisible. It looks so organic and alive – in my mind it grows and spreads its wings. That image then became my creation.

Debate about the nature of art has always been heated, particularly since Andy Warhol’s use of mass-production imagery in the 1960s. One of the main concerns is that art loses its independence and freedom when it chooses to co-operate with commerce. But Kum, whose birdcage-inspired installations can be found in shopping malls, believes that there is a balance to be sought.

“I can’t say that creating work for commercial purpose is as 100 per cent free as in creating work for a museum, because there are all sorts of considerations such as safety,” he says. “But there is certainly a bottom line, which the artist should be clear about before she/he accepts a commercial commission. From the commercial side there is also always respect to ensure room for creativity.”

Lee sees clear touch points between art and luxury. “Art reflects an individual’s sense of style and taste, and represents high quality, attention to detail, craftsmanship, innovation, and creativity,” she says.  “These are the qualities that are essential to anything that’s opulent and luxurious”.

Wan believes that while tensions do exist between luxury design and art, there is a thread linking the two together. “While art is about being true to oneself and creative freedom, product design is about bringing beauty to ordinary stuff. They cross over when it comes to aesthetic values.”