Google+"/>
The Kowloon waterfront became a magic garden on Wednesday night, courtesy of Christian Dior, writes Daniel Jeffreys. A glamorous coterie of guests gathered to enjoy a dry, soft breeze, the kind of weather that is rarely seen among the islands of the South China Sea.

It was a perfect recipe for a Parisian confection. Take one dark velvet sky, add a dazzling skyline, mix with genius in the form of Raf Simons and Alexandre de Betak and you have the Dior Couture show for Spring-Summer 2014, Hong Kong style.

“Raf’s work at the house has been extraordinary,” said Dior CEO Sidney Toledano, shortly after breaking from a chat with a trio of Hong Kong’s finest, led by Lady Betty Kadoorie of Peninsula fame. “He has evolved a unique interpretation of the Dior archive.”

That interpretation was displayed inside a silver box, approached via an avenue of dove-grey carpet (red is far too vulgar for Dior). This was a show in two parts. The first began with guests assembling to sip champagne as they mingled around the edges of the walkway and enjoyed the impromptu catwalk.

Dozens of the city’s socialites had dug deep into their closets to coax previous season’s Dior couture back into the limelight. Knowledgeable fashion industry hands could enjoy the couture equivalent of train spotting as they whispered, “She’s wearing that blue dress from Raf’s first couture collection” or “Those shoes! They were my favourite part of Raf’s second collection.”

It’s rare to see so much of Dior’s couture work being worn by its clients, as opposed to models. The parade was impressively chic, with each dress showing how couture gowns can be shaped to bring the best from a wide range of body types. If diamonds are a girl’s best friend then couture is her guardian angel, always ready to make sure that every variety of God’s creation looks like a million dollars.

Inside the silver casket, impresario Alexandre de Betak, architect of Dior’s shows for many a year, had created a backdrop consisting of Dior’s Avenue Montaigne façade complete with windows though which a digital diorama of the maison’s couture creations could be seen, worn by a battalion of svelte models. 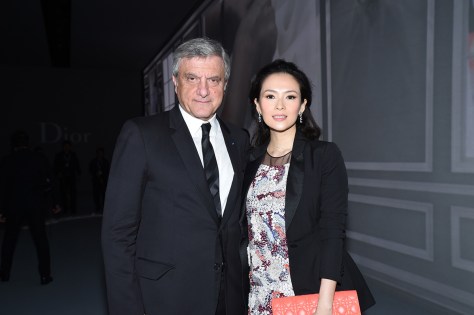 When China-born model Ming Xi led off the show wearing an embroidered and pleated off-white silk dress the backdrop vanished to reveal the skyline of Hong Kong island, producing gasps and applause from front and back row alike. The twin pillars of the Shun Tak buildings in Sheung Wan became a screen for complicated digital patterns that moved in time to music from the catwalk. The light show echoed the inspiration at the heart of the collection.

“I see this collection as almost abstract,” says Simons. “I wanted to focus on the idea of intimacy around couture, more that anything else, the emotional experience of it; the relationship between the clients, the salon, the women.”

The pieces on the catwalk spoke eloquently of Simons’ take on intimacy. This was a collection of hidden secrets and sensual revelation. Many of the dresses had a multiplicity of artfully sewn cuts in fabric, which had been crafted into a shape that hovered between a kiss and a pout, like a woman’s mouth when she is half way between love and lust.

Among the 52 pieces there were four that referenced the “Bar” jacket created by Christian Dior, which is the stem cell of the maison’s DNA, but apart from these nods to the past this was a couture collection full of modernism and reinvention. There were short jumpsuits, cut-off dresses and sneakers, the last of these three being offered without irony, as a natural evolution of couture for the modern age, which is precisely what Simons had in mind.

The previous maestro at Christian Dior Couture was John Galliano, and he took the house through its grandiloquent, extravagant Caravaggio phase, with equal measures of drama, genius and farce.

With Raf Simons, Dior has a new genius, one who is more in the mould of Mark Rothko, producing clothes as art, with an intellectual rigour and a profound understanding of the self-expressive aesthetic that shapes the modern age.

Dior’s Kowloon show took place on the site of what will one day be the city’s M+ museum of modern art.  Until that building opens its doors, it’s unlikely West Kowloon will see anything so captivating as Dior’s latest couture collection.