The Shangri-La Paris hotel is an aristocratic gem on the banks of the River Seine with captivating views of the Eiffel Tower. The former home of Prince Roland Bonaparte may look like a palace but as Daniel Jeffreys discovered it’s the property’s intimate elegance that makes it feel so special.

At eight o’clock in the morning, in December, with snow clouds forming in a slate-grey sky it’s hard to feel the heat of summer, especially after a 13 hour flight from Hong Kong, a one hour taxi ride and an hour waiting for a suite to become available.But as we breezed into our accommodations at the Paris Shangri-La on Avenue d’Iéna I felt an explosion of warmth in my chest as I flung open the beautifully crafted windows.

There before me stood the Eiffel Tower, glistening with pink and purple hues as the flaming fingers of a rose red sunrise reached out to touch its familiar curves. It was a sight to make the pulse quicken and all my fatigue evaporated. I was in Paris, its very heart, on the eve of Christmas week and I was standing where Napoleon Bonaparte’s grand nephew once stood as he surveyed the Seine and planned his expeditions to the frozen north.

As we relaxed and took tea from an exquisite porcelain set my sense of renewal was enhanced by my surroundings. The Shangri-La offers 81 elegant rooms including 27 suites decorated by renowned interior designer Pierre-Yves Rochon. With a classical French style and elegant tones of blue, gold and cream, each room preserves the charm of a high-class private residence.

I immediately felt like a French aristocrat of the pre-guillotine era. If I closed my eyes I could imagine being John Malkovich’s character Valmont in Dangerous Liaisons (1988), preparing to receive an army of servants who would pamper and powder me until I was ready to be dressed in the height of 18th century fashion.

Roland Bonaparte had his hotel particulier built in 1891, just two years after the Eiffel Tower. A penniless working class mother raised Napoleon’s nephew, so his story is one of riches to rags and back to riches again. His upbringing blessed him with humility, generosity and a powerful work ethic, which means his mansion was designed to be used and before long it was home to an extraordinary art collection and a private herbarium with over 2.5 million specimens. The young not-so rich aristocrat was able to fund all this because of his fortuitous marriage to Marie-Felix Blanc, heiress to the Casino of Monte Carlo. A saying of the day was that whether a roulette gambler played rouge or noir, Blanc always wins. 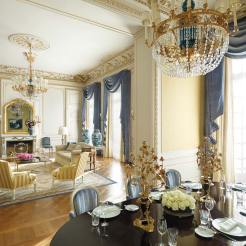 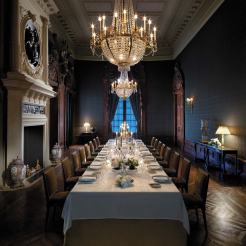 A private dining room for meetings, conferences and celebrations 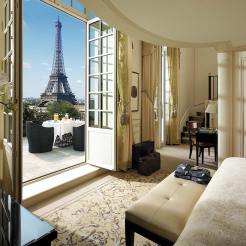 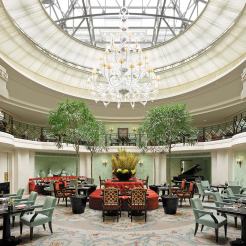 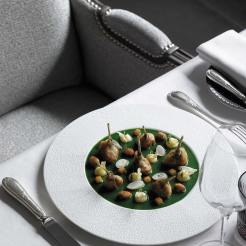 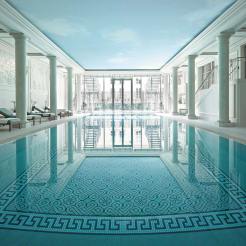 Marie-Felix’s money ensured that no expense was spared in making No. 10 Avenue d’Iéna one of the most beautiful and well-constructed buildings of its day. Shortly after she gave Roland a daughter (Marie Bonaparte, who later became a disciple of Sigmund Freud) Marie-Felix cashed in her chips and left her husband one of Europe’s largest fortunes. Roland never took any of his money near the gaming tables, he preferred to invest in books and paintings and he turned his hotel particulier into a haven for his scholarly works and his activities as president of the Paris Geographical Society.

As I stood looking out at the Seine, now illuminated by mercurial sunshine, the flow of the water was a metaphor for the fact that nothing is untouched by change and Roland’s house has not been immune. After Roland’s death in 1924, his daughter sold the house to a French Corporation which tossed the property onto the dull tides of corporate life. For too many decades the marble corridors and state apartments with their gilded swirls of imperial eagles, bees and perfectly carved “B” monograms echoed to the sound of profit and loss as the space was crammed full of offices.

The Shangri-La group purchased the building in 2006 and embarked on a renovation to save the hotel from the spiritual poverty into which it had sunk. Just as Marie-Felix had rescued Roland Bonaparte from penury, blessing him once more with the trappings of aristocracy, so the Shangri-La has restored Avenue d’Iéna’s most graceful hotel particulier to its rightful status as one of Paris’s most elegant buildings. Unlike the new Peninsula Paris, which was originally built as a commercial hotel in 1908, the Shangri-La Paris has an unimpeachable aristocratic pedigree that money just can’t buy.

Although I could have remained in my suite for days, the gleaming desk in the corner with its view of the river and the Eiffel tower being the perfect place to write, I set out to explore, beginning the next morning with a sumptuous breakfast at La Bauhinia, which is renowned as one of the finest restaurants in the Paris.

The circular room has a powerful presence and conveys a sense of occasion that is unmatched by any dining room in a grand hotel, with maybe the exception of the lobby of Claridge’s or the Green Park facing restaurant at the Ritz. It’s a great place to watch the great and the good, or to practice Mandarin, more than half the guests seemingly being from China.

The tables are big enough to scroll through maps on a tablet and decide whether to begin exploring with the Museum of Modern Art, the Palais de Chaillot or the captivating Museum of Fashion in the Galliera Palais, where precious couturier creations from the 18th century, through to the present day can be viewed in a Renaissance-inspired palace. Once the appetite for creativity and self-expression has been stoked to a white-hot heat by these treasures the Avenue Montaigne and Champs Elysee are close at hand, providing almost endless opportunities for shopping and retail infused bankruptcy.

Returning to the hotel there is a16 metre long swimming pool bathed in natural light that awaits, and this is a perfect place to find the rejuvenation required for a night out in the City of Light.

All of these facilities, including the excellent Shang Palace restaurant, L’Abeille restaurant in its charming garden setting and Le Bar with its Empire-style décor are expressions of the Beaux Arts spirit of the property and benefit from the original work done by Ernest Janty, Roland Bonaparte’s architect.

Janty had to take account of the sites significant differences in elevation and its hilly location. Despite that he created a structure that Roland Martinet’s, the architect chosen by Shangri-La for the restoration, found to be admirable, in that it allows “light to circulate throughout.”

There is no question of that, at least from the perspective of our sitting room, an aerie that seemed to hover alongside the Seine and felt a perfect place for an Imperial eagle to roost. And as darkness fell, a full moon rose to sit precisely above the top of the Eiffel Tower, like the point of emphasis on an inverted exclamation mark aimed deep into the dark velvet heavens above. No wonder they call it Shangri-La.