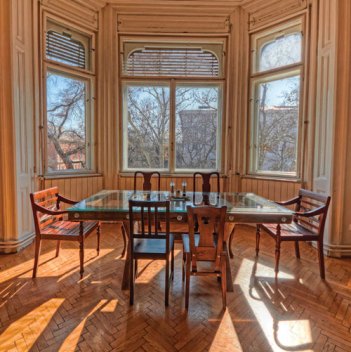 [dropcap size=small]I[/dropcap]t has been over a month so I finally feel free to give up the inner secrets of the Scalpel Salon held in Budapest in March. The salon and its annual award for creative collaboration is the brainchild of Pernod Ricard and Vadim Grigorian, the Paris-based drinks giant’s head of Creative Marketing. The concept began as a magazine and Scalpel retains its claim to be the world’s most exclusive periodical with a print run of just 650 gorgeous, stimulating books that have an original piece of art work signed and numbered by its creator.
Each of the issues (it is now in its third year) has had a diverse range of contributors and these people form the Scalpel community, from which a group of a dozen or so are selected each year to meet and award the Scalpel prize.  This year’s crew included Ross Urwin from Lane Crawford and an eclectic mix of designers and editors, which included me. We began by checking into the marvelous Brody House (www.brodyhouse.com), from where we embarked for a private tour of the National Art Gallery, complete with a delightful dinner in the marble vestibule.
The next day judging began in earnest. The entrants are the best of Pernod Ricard’s creative collaborations over the previous year. Two front runners emerged – a collaboration between Absolut Vodka and design collective Los Carpinterosat, which took place at Art Basel Miami Beach in December 2012 and created a bar within a sculpture called Guïro and a movie titled Seven Days in Havana that was co-produced by Havana Gold and directed by Benicio del Toro plus six other innovative directing talents. The movie won but the fascinating part of the judging is how Pernod Ricard is willing to expose its creativity to the rigorous criticism of outsiders such as the Scalpel Salon, most of whom pull no punches.
Other brands could benefit from exposing their creative collaborations in this way. It’s painful at times to hear cherished projects being trashed, but what doesn’t kill you makes you stronger. Grigorian is also the man behind the Absolut Art Bureau, which commissioned Adrian Wong to create an installation called Wun Dun for this year’s Art Basel in Hong Kong. The title of the piece stems from Adrian Wong’s interest in creation mythologies. Wun Dun can be variously translated as referring to a primordial chaos, formlessness, or the name of an ancient Daoist god.
In creating the installation Wong has searched for stories that lie partially concealed under the many overlapping layers of modernisation and constant renewal that define the city of Hong Kong. The location of the art bar was a virtually unknown cavernous room underneath a popular Hong Kong club on Lower Albert Road. It’s likely Wun Dun will be nominated for next year’s Scalpel prize, and wherever that takes place it will struggle to match Budapest and the Brody House. It’s hard to forget the beautiful bedrooms in the artistically restored 19th century building, or the gorgeous public rooms where breakfast and contemplation could both be enjoyed with equal passion. Trust me, you won’t want to leave.