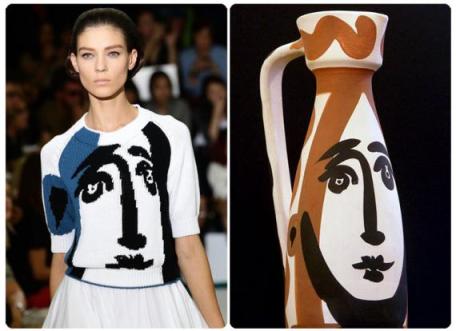 We think of art appreciation as erudite, but an interest in fashion is considered airheaded. When an art-lover buys art, it’s called “collecting.” When a fashion enthusiast buys clothing, it’s called “shopping.” Art is supposed to be timeless and important, while fashion is understood to be ephemeral and frivolous.

Despite this much-litigated list of ontological differences between art and fashion, the two are cross-pollinating more than ever. In fact, it’s possible the moment has never been riper.

For her spring 2014 show in Milan, Miuccia Prada commissioned six contemporary artists to create murals to decorate her catwalk. The resulting imagery inspired bold but surprisingly wearable dresses and handbags for the collection. Nearly two weeks later, in Paris, Karl Lagerfeld presented his collection for Chanel at the Grand Palais, transforming the exhibition hall into an art-fair-style, white-walled hangar. Models strutted amid 75 sculptures and paintings conceived by Mr. Lagerfeld, who played with the brand’s iconography—pearls, perfume bottles, camellias, double “C”s. Some canvases were ornamented with planks in the style of artist John McCracken, others framed like old-master work. Many pieces were accompanied by little red dots reminiscent of those seen on “sold” paintings at gallery shows. Mr. Lagerfeld’s accompanying spring fashions felt at once provocative and commercially viable. Jay Z’s song ” Picasso Baby” provided the score. Read more..