Many songs and poems have perished along with the minstrels who sang them, while untold books and scripts have been buried and burned but the culture and history coded within colour has endured. A new exhibition at HKDI revealed to Summer Cao how diverse Asian societies have been sustained and revitalized by the vibrant hues that are their signature. 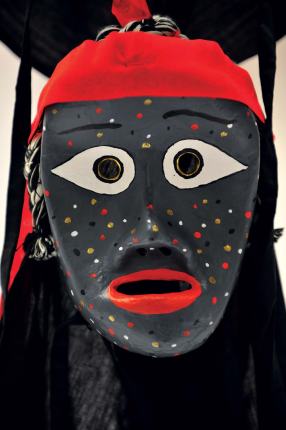 The artist Marcel Duchamp took a radical position with regard to colour, proclaiming that,  “…since the tubes of paint used by an artist are ready made products, we must conclude that all the paintings in the world are ready made…” In a painting called Tu m’, his last oil on canvas, made when his contempt for paintings produced by ready-made materials was at its peak, he ironically produced the first work in the history of art that consisted of colours from a paint catalogue.

The title Tu m’ is a French phrase in which the verb has been left blank for others to select and it means “you…me”. Suggestions for what Duchamp may have had in mind for his blank verb include “bore”, as in “you bore me”, suggesting the artist held the future of art in contempt.

Duchamp’s nihilism becomes more understandable in the context of art history. Before the advent of mass-produced paint, artists often used rare natural ingredients to mix certain hues that were thought to create specific emotional or psychological effects in the viewer, based on long-held convictions regarding the spiritual significance of different colours. For example, in Van Eyck’s Giovanni Arnolfini and His Bride, the pregnant female wears green because in Celtic mythology the Green Man was a foot solider for the God of fertility.

Duchamp would no doubt be disgruntled to discover that many western artists have taken advantage of cheap and easy accessible colour to let loose a new and many-hued outpouring of creativity in modern art, as seen in the work of bankable stars like Ellsworth Kelly, Andy Warhol, Dan Flavin and Damien Hirst.

However, all this trail blazing, mixing manufacturing ingenuity with creative innovation has nearly separated colour in the West from several millennia of history and cultural references. The fact that colours are widely celebrated in Western art through their modern incarnation in works such as Kelly’s Colour’s for a large wall, Warhol’s Marilyn and Damien Hirst’s John John has washed colour clean of its cultural associations, making the western public largely oblivious of the meanings that different colours once conveyed.

The prevalence and popularity of these artists has given western culture a substantial influence among artists in Asian countries, and has divorced some of them from their own rich cultures and traditions. Art students in Asian countries still study and make colour charts like those that are implicitly denounced in Duchamp’s Tu m’. Seldom do they have an opportunity to discover the historical roots that different colours have in their own culture.

The exhibition Colours of Asia that the Design Alliance Asia (tDA Asia) presented at the Hong Kong Design Institute from 3 November to 31 December is a timely warning to all regarding the importance that the study of colour should have in cultural education and in promoting the diversity and strength of Asian cultures.

“We use colour to define who we are and our place in the world,” says William Harold-Wong, the co-curator of the exhibition.

“If colour is so fundamental for a culture to describe itself—it’s identity—then the more these colour codes are used, the more enduring the culture becomes.”

As if to echo Harold-Wong’s words, its no surprise that the British Broadcasting Corporation launched a new series called A History of Art in Three Colours this summer. The documentary explores how the use of gold, blue and white, along and with their cultural associations, has evolved through the ages. The BBC series echoes the key point made by the Colours of Asia exhibition, namely that the histories and anecdotes embedded in colours are a vital component of a culture’s survival and vitality. 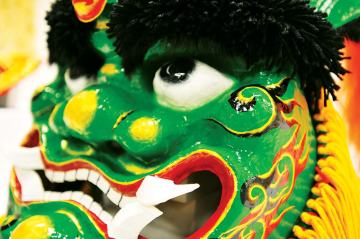 However, although the British documentary is important, it hardly fulfills the brief implied by its title, because there is scant reference to Asian art and culture, suggesting that a “the history of art” need not trouble itself with an Eastern perspective. The series could mislead art and design students in Asia, and strengthen western’s culture hegemony in some Asia countries.

The Colours of Asia exhibition is a singular antidote to the over-weaning power of Western popular cultural and the fragile culture identity that some Asian countries have in the post-colonial era.

“The primary objective of Colours of Asia is to create a wider awareness of Asia, and ‘Asian-ness’ which is a way of thinking and doing, its many cultures and belief-systems, its aesthetics and philosophies, and their relationship with one another,”

says Harold-Wong. “Although the exhibition only touches the surface, we hope its images and artifacts will help everybody, not just designers, to think more deeply about Asia.”

For Harold-Wong to use the word “surface” as an adjective to describe the spectacle and richness of the exhibition that occupies two floors of HKDI’s d-mart is a humble understatement. The exhibits were selected from more than 3,200 pieces of traditional crafts or colour symbols whose historical values are still apparent in 13 Asian regions, either in the form of customs and rituals or through being included in contemporary designs. The pioneering colour research has also laid a solid foundation for future studies of both design and culture.

“Colour enriches us sensually, spiritually and emotionally. It is a popular and universal subject to start our investigation into what constitutes the essence of Asia,” Harold-Wong says.

“Given the complexity of colour perception among Asian communities, the project’s wide geographical spread and the diversity of cultures and languages, it was indeed a challenge to complete the research in nine months, but we are confident of having established a base of information and stories from which further research in specific areas can follow.”

Although the quantity and variety of information is dauntingly abundant, the exhibition was arranged in a visitor-friendly setting with colourful images, traditional crafts, artefacts from festivities, food, spices as well as packaging designs and modern products embedded with colour codes. The plentiful exhibits don’t just provide a visual aid for recalling which colors are key to which cultures, but they also showcase the nuances that the same colours can capture in different cultural contexts.

The exhibition starts with a palette of five colours, including the three primary colours, red, yellow and blue; a secondary colour, green; and the pair of black and white. Mixed colours such as saffron, indigo, and purple are also featured in appropriate colour zones to show their importance in Asian culture.

For example, the colour indigo is given a specific platform because indigo is a plant found and used in almost all Asian countries, thus an important colour for Asians. It is also regarded as a fashion colour and various decorative designs were showcased to show how it is used in different regions in Asia.

Visitors were also told fascinating stories of Indonesian tribal wars in which women who killed one or two invading men would save their tribe from destruction and be regarded as a deity, and how traditional silk production in Laos has remained sustainable by letting the silk worms crawl out of their cocoons instead of the commercial norm that entails boiling them to death in search of the same result.

For those who could not visit Colours of Asia, all is not lost. “The research papers related to the exhibition that are currently being prepared by all thirteen participating countries will be uploaded on the Internet by Hong Kong Design Institute in early 2013,” says Harold-Wong, who has great dreams for the impact the research might have.

“I see an Asia beyond (or before) the artificial national borders that came into place, where we all share commonalities in our diverse communities. We need to reflect on the richness of our cultures and to advance Asian identity as a vital cultural force and a strategic platform for design.”

And Duchamps would probably agree, arguing that a colour chart is nothing but a guide to the chemical composition of manufactured paints, whereas a colour that is still deeply embedded in a culture provides a map that reveals the size and shape of a peoples’ hopes and fears.