Like Eve’s Apple, the men’s two-piece has almost become taboo, a clothing combination emasculated by casual Friday and Americans who dress like five year olds from cradle to grave (Thanks GAP). The exception is in Asia where (Thank God!) men can still get dressed up and at the Spring Summer 2013 men’s fashion shows in Milan and Paris every designer had something suit-able for the Eastern man (and his wallet). Daniel Jeffreys was there (and always wore a jacket)

It was around half past eight on a lovely June evening in Milan when I thought jet lag had killed my brain. I was sitting in the Palazzo Versace’s courtyard as a summer zephyr moved the branches of old fig trees, when suddenly I woke up and found myself at a World Wide Wrestling Federation event. Except I hadn’t been to sleep and a self-administered slap to the face told me I wasn’t dreaming.

Donatella Versace was really sending guys down her runway dressed like Goldust, Gorilla Monsoon and Grandmaster Sexay. The inspiration Versace cited for the gigantic golden belts worn around tiny bunga-bunga underwear was Greeks and Romans and you could see what she meant, assuming you were a fan of Brad Pitt in Troy, as opposed to being somebody who knew something about Greco-Roman fashion. 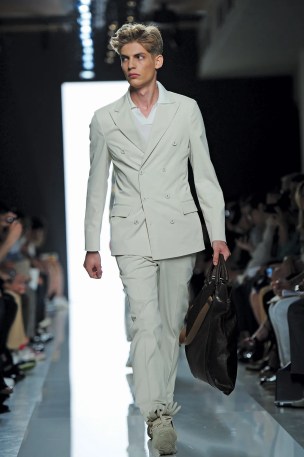 Being on an anthropological safari in search of the lost suit I was looking for something with a little less under and rather more wear about it, and half way through the show my prayers where answered when la ragazza di Via Gesu sent out a very fetching white two piece with lots of technical features such as zips in places hikers find useful, elegant cargo pant pockets (yes, I know, it’s odd to find “cargo pant” and “elegant” in the same phrase) and boots that were ready to scale Mont Blanc.

There were other looks in the show where models sported a top and bottom made of the same fabric, which satisfies the most minimal definition of a suit, but these either had no sleeves or featured shorts – and a shorts suit is not something a gentleman should consider beyond his third birthday, unless he is taking the Greek theme to its logical conclusion. My goal was to find suits that Cary Grant, Chow Yun Fat or Daniel Craig could call home and for that I would have to look elsewhere.
Thankfully the Milanese tailors know on which side of the world their bread is buttered, and understand that in Asia we still have a passion for formality, making Greater China the world’s biggest market for men’s suiting. At Giorgio Armani the old master was up to youthful tricks, weaving padded materials into a linen and wool suit to produce a look that was both classic and modern. Along with a strong selection of sharp gray business suits, GA also gave good casual, with a series of taupe plaid suits, to be worn crumpled, and matched with T-shirts, gray belts and oxfords. Yet there was something missing.
One would feel elegant in these clothes, maybe even stylish. But not like a movie star or a secret agent. For that one needed Tomas Maier, the bard of Bottega Veneta who, like dear Mr. Shakespeare seems able to turn any theme into a masterpiece. I loved Guy Trebay’s description of Maier’s SS 2013 show in the New York Times as “an ultrarestrained sartorial training session for the ultrarich.” Trebay, bless him, continued with a fine dig at BV’s client base: “It is hard to imagine what, without his strong hand guiding them toward impeccable casual taste, the hedgies would do. Actually it isn’t. They would show up for lunch at the Four Seasons restaurant, that last bastion of elegance, in Mark Zuckerberg hoodies.”
New York’s Four Seasons (not the hotel but the restaurant insideMies Van Der Rohe’s masterpiece building on Park Avenue) is not the place to go dressed in one of Versace’s tag teamtogas, or indeed the similarly kitsch offerings at Dolce &Gabbana where (heaven what a shock!) Sicily was the theme and the catwalk was inexplicable thronged with schoolboys or slightly older chaps who were dressed as same. I remember wearing clothes like the D&G outfits, when I was in the third year of primary school, and as I watched the hurrying crowd of 12 year olds I began to feel anxious, as if I was late for third period Geography and ought to join them in the rush for a classroom. 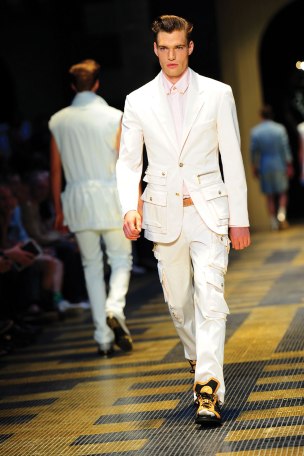 Fashion is not supposed to make a grown man feel pre-pubescent (that’s the function of costume and fancy dress shops) and, in common with Versace and Dsquared, what the D&G show lacked was adult sophistication.  Maybe Giorgio Armani is right when he said recently “These designers have no reserve.

They’ve chosen a path and thrown themselves onto it head first, regardless of everything. Whether or not their designs are sellable or vulgar. As long as it’s new and people talk about it. That is the truth.” If you want to feel handsome, sexy and suave, best head away from kitsch-land and embrace the aesthetic high sensibility of Prada, Jil Sander and Salvatore Ferragamo. All thee houses pulled off innovation and elegance in the same breath, without relying on garments that most men would hide in a closet until Halloween, although at Prada I did feel like I was being haunted, by the ghost of last year’s Celine collection for women.
At first I was captivated by the Prada collection, swept along by a palette that was characteristically eccentric with clothes that were based on simple shapes, but then reality tripped and I suddenly felt like Alice, only my descent down the psychedelic rabbit hole took me to a place of wonder called Phoebeland, as in Philo. I might not have noticed that the Prada collection had so much of Celine about it had the house not sent out some of Miuccia Prada’s men’s offerings on skinny girls.
This obvious gimmick (yes, MP, we know, you find the lines drawn between gender to be artificial) backfired because the reference was so obvious. From the moment the first female appeared even the presence of “mature” male models could not stop me thinking, “So, this is what a Celine menswear collection would look like.” At Salvatore Ferragamo, Massimiliano Giornetti seemed determined to banish any thoughts of economic doom, with an artfully conjured summer world in which brightly hued clothes match iridescent cocktails held by vacationing playboys without a single care beneath their tousled hair.
His suits, resembling sports clothes and made from bonded cotton, were supposedly inspired by the frenetic energy of Los Angeles, but the only way I could make that reference work was by calling to mind the city’s Technicolor sunsets, in which the dense mixture of particles in the polluted air refract the light to produce flaming orange and brooding purple.  The best thing about Giornetti’s show was the feeling of joie d vivre his suits inspired. One felt like guys wearing such colours would be fun to hang out with, and must have a Ferrari parked nearby with the keys to aSunseeker yacht and a Lear jet in the glove compartment. 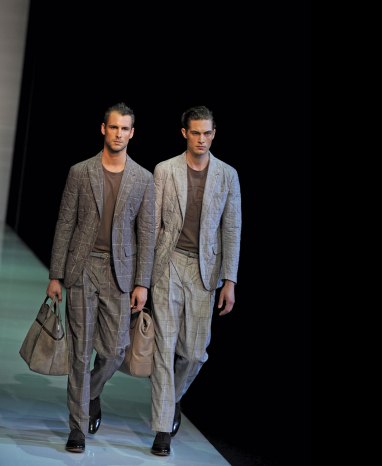 Burnished turquoise and other shades from a mad ice-cream maker’s palette were also on display at Roberto Cavalli’s show. One can’t help but love Cavalli for having the cojones to call Mr Armani a “little king” (it wasn’t a compliment) during the recent series of women’s ready to wear shows in Milan, but he’s also to be admired for his work. When RC has his mouth full of tailoring pins instead of expletives he can be a genius.

With his first store in China devoted to menswear now open (it’s at the Peninsula in Beijing), the mercurial Florentine designer is finally treating this region’s market with the seriousness its spending power deserves. The Beijing store is due for a full opening next April, which is when the beautifully tailored and peacock coloured suits from his SS 2013 collection will be front and centre.
While these are not the suits to wear for an audit meeting with the bank manger they are perfect for a night out when a style statement is required. I left Milan on the 6am train that scythes through the splendour of the Italian and Swiss alps before arriving at the Gare de Lyon just before 1pm, giving plenty of time to be seated at Kim Jones’s third show for Louis Vuitton, under the direction of Marc Jacobs. The collection was themed around the sea and may have been paying homage to LV’s retiring captain, the yachting-obsessed Yves Carcelle.
Jones put it this way, “I wanted to do a luxury version of things that are real. I like the idea of giving and offering a lifestyle. So you start on your yacht, then you’re racing your yacht, then there’s scuba diving and island life.” Not many suits find their way onto a yacht, unless it belongs to an ex-US banker and they have arrived to execute a re-possession. Nevertheless the first outfit Jones sent out was a beautifully cut, double-breasted navy wool mohair suit complete with wooden buttons, which featured a coral and rope rigging silver pin and was worn with crisp white deck shoes.  It would look good at a polo match – or a lunch at the Four Seasons.
There were many other shows on my schedule but none of them deviated enough from the middle ground, for good or ill, to be mentioned here. Fashion, as ever, is a palace of extremes and only the best or worst get through the gates. There are those who will be happy in Versace or D&G’s offerings for SS2013, but if I find myself looking for a fine chap to share a bottle of champagne, a plate of oysters and a chat about Wittgenstein’s theory of aesthetics I’m hoping he will be wearing something from BV. More stories like this are available in Quintessentially Asia.