Yves Carcelle, architect of Louis Vuitton’s ascendancy, dies of cancer at 66. Daniel Jeffreys remembers a genius of marketing and luxury whose loss leaves a void that will be hard to fill. 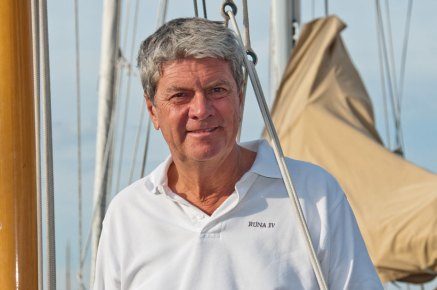 All of us at The Fashionable Truth are deeply saddened by the death of Yves Carcelle at the age of 66. Yves was an astonishing polymath with an insatiable appetite for life, luxury, friends and travel. And above all Yves was a great sailor who knew how treacherous life’s currents could be and had evolved a brilliant plan for navigating himself to the best oceans and the grandest beaches.

When Carcelle resigned in 2012, he remained a member of LVMH’s executive board and became president of the Louis Vuitton foundation, a Frank Gehry-designed museum outside Paris that will house its art collection and is due to open next month.

I last talked to Yves earlier this year at a party for the men and women who built the foundation’s museum in the Bois de Boulogne, creating what will become the best museum for modern art in Europe. He was already deathly ill, but despite his debilitating sickness he was the model of graciousness, combining politeness, intimacy and geniality in a way that can only be mastered by the most generous of hosts.

I once spent a few hours on a yacht with Yves and it was one of the most entertaining afternoons I have ever enjoyed. His insights on luxury were astonishing, and nobody should forget that LVMH would not be the force it is today without Carcelle’s influence. If Yves had not steadied Bernard Arnault’s nerve, it’s doubtful that Louis Vuitton would have been the first major French luxury brand to capture the imagination of Chinese consumers. And without Yves, Louis Vuitton would certainly not have quadrupled its worldwide roster of stores to 470 in the space of a decade. It’s also unlikely that Arnault would have embraced a young maverick like Marc Jacobs to be the source of Louis Vuitton’s metamorphoses from staid malletier to global fashion phenomenon without Carcelle’s eventual support and marketing of the idea (Carcelle initially opposed Arnault’s choice).

Arnault has already commented upon Carcelle’s death, saying, “It is with great sadness and emotion that I learned of the death of tireless traveller Yves Carcelle, Yves was the image of the house that he has long embodied: a pioneer, always curious, passionate, moving; he was one of the most inspirational men that I have ever met. LVMH today lost one of its dearest friends.” The LVMH part is corporate speak, but Arnault is right about Yves’s inspirational qualities.

I partied with Yves in Hong Kong and Macau and I always left for bed before he was ready to step way from the dance floor, and he would always be at a breakfast meeting before me the next morning.

In 2012, I met him at a Louis Vuitton party in Hong Kong. He was displeased at being asked to step aside as CEO of Louis Vuitton. He also disliked having to babysit fashion ingénue Jordi Constans, while the former Danone executive who was designated to be LV’s next CEO tried to figure out how to run a luxury fashion brand. With typical humor, Yves referred to Constans as “the yoghurt guy” and refused to call him by name. He spent thirty minutes tossing around acid brickbats aimed at those who had chosen Constans and finished off by saying that “Louis Vuitton has its best years ahead, but it must rethink its approach to China.”

His words proved prophetic, and it has been in the China market that the Louis Vuitton he bequeathed to Constans (who departed the job after one month due to ill-health) and Michael Burke, who is now CEO, has faced its toughest challenges.

There is a story, which may be apocryphal, that at the cocktail party to mark Carcelle’s retirement, Arnault lamented that “people don’t dream about Vuitton any longer, they dream about Hermes and Chanel, but not Vuitton.”

Whether Arnault actually said these words is unimportant. The key fact is that Carcelle understood, better than anyone, how important a dream is to those who sell luxury. If Louis Vuitton want to reclaim the regard it once enjoyed among the aspirational classes, the brand will need to find somebody else whose dreams and passion for life are as profound and dynamic as those of Yves Carcelle.