For Vuitton, More Than Window Dressing 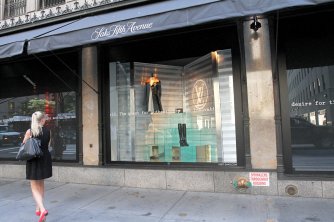 It didn’t take long for the Saks Fifth Avenue president, Marigay McKee, to find Michael Burke at the conclusion of Nicolas Ghesquière’s first runway show for Louis Vuitton. According to Mr. Burke, Louis Vuitton’s chief executive, it took all of a few seconds for her to spring from her seat and begin the full-court press. “It was so intense, that moment,” Mr. Burke said in an interview. “Marigay looked at me and said: ‘I want it. I want your first collection. I’ll give you all my windows.’ ”

Within days of the March 5 show, they had a deal, and it all comes to fruition this week. Beginning Friday, Louis Vuitton will have full control of 16 of Saks’s display windows on Fifth Avenue (and spilling over onto 49th and 50th Streets) to showcase Mr. Ghesquière’s inaugural collection. Read more.