For the Wolf of Luxury, a Chance to Be a Lamb 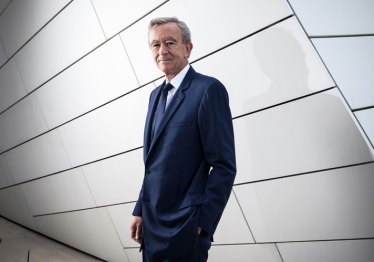 High above the luxury shopping utopia that is the Avenue Montaigne in Paris, Bernard Arnault, the 65-year old chairman and chief executive of LVMH Moët Hennessy Louis Vuitton, was sitting in a wood-paneled conference room and smiling. Really smiling: eyes crinkled, teeth agleam. You might even say he was grinning.

It was slightly disconcerting. Mr. Arnault’s face is known all over Europe, but its expression is normally one of poker-faced impassivity, eyes dark under heavy gray brows. At an imposing 6-foot-1, and always clad impeccably in a dark suit, he is as mythical — and as feared and admired — as Steve Jobs was in the United States. For years, Mr. Arnault was referred to as “the wolf in the cashmere coat.”

The first of the luxury titans, he built LVMH into the largest luxury conglomerate in the world, owner of more than 60 brands including Louis Vuitton, Marc Jacobs, Givenchy, Fendi and Bulgari. Along the way, he became the richest man in France, with a net worth of $29.5 billion, according to Forbes. A confidant of the powerful, he was a witness at Nicolas Sarkozy’s wedding to Carla Bruni in 2008 and was made an honorary Knight of the British Empire. And yet, on a sunny afternoon in July, he was looking less like a calculating globe-trotting billionaire than a child in thrall to a wonderful new toy. Which he kind of was.

The toy is a contemporary art museum and performance space: theFondation Louis Vuitton, a sinuous, 126,000-square-foot glass and steel structure designed by Frank Gehry and tucked away in the Bois de Boulogne of Paris. Mr. Arnault has spent the last decade making the FLV a reality — it opens to the public this month — at a reported cost of more than $135 million. Read more.