Their second favourite place in the UK is Bicester Village (after Windsor Castle). Think how happy Chinese label groupies will be now that Bicester has arrived on their home turf. Lisa Armstrong charts the rise of China’s bargain hunters. By Lisa Armstrong 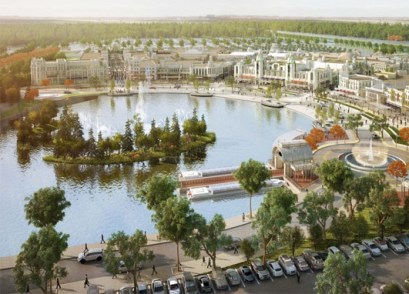 An artist’s impression of Shanghai Village

On a humid morning in mid-June, as the sun attempts to burn a keyhole through a beige cloak of smog, a bride in all her white meringuey froth poses with her groom on an ornamental bridge adorning a miniature lake in Suzhou “Village”.

This is not really a village, of course, any more than Bicester Village in Oxfordshire is – although, like Bicester, one can buy cottagey chintz and kitchenware from the Cath Kidston store in Suzhou and, unlike Bicester, eat farm-to-table local produce at an excellent Chinese restaurant. But while Bicester has been in business for a phenomenally successful 19 years, in Suzhou Village building has only just been completed. When I visited, 15 stores were up and running. Come October, 100 top-tier leaseholders (including Tod’s, Valentino, Gucci, Salvatore Ferragamo, Alexander McQueen, Bally and Hackett) will be open. That bride will not be the last to stage her wedding pictures here.

With its studiously low-rise buildings – an audacious pastiche of the architecture Marco Polo would have encountered 700 years ago on his inaugural journey from Venice, through Greece, the Middle East, Afghanistan and Xanadu, to Suzhou, where he arrived in 1276, when it was the world’s premier city for silk growing and weaving – Suzhou Village is something of a revelation to the Chinese. It’s a spacious, unhurried public space the likes of which are increasingly uncommon, particularly in a commercial context, and especially in Suzhou, which has attracted 500 companies in the past two decades, many of them industrial. A second-tier city situated in an un-villagey sounding “mega-corridor”, Suzhou counts 85 million people within a three-hour drive.

It is time, the local authorities have decreed, to make the city a more congenial place to live. There is a nature reserve, there’s a genuinely old district clustered round a canal, and now there’s the Village, where small groups of respectful customers – dressed in a mixture of cheap leggings and high priced trophy bags – are already wandering its pristine streets, admiring the plate-glass windows, wood-panelled Welcome Centre and curated arts spaces (the current exhibition pays homage to Suzhou’s silk weaving).

The low density was an important ploy, explains Daniel Jeffreys, a British expat who consulted on Bicester’s foray into China.

“The sense of space and landscaping is perceived by the Chinese as a generous gesture that chimes with Wu culture, and they’re impressed by it.”

We must stop referring to it as a village, however, despite the Ming-inspired landscaping and tinkling streams. For it turns out that a village, far from having bucolic, chocolate-box connotations, is considered by most Chinese to be a place of abject squalor and exile from which most of them pray they will some day escape.

So Value Retail, the British-based company that owns Bicester Village, the stylish, clapperboard Oxfordshire shopping outlet beloved of the Duchess of Cambridge and, it must be said, hundreds of thousands of Chinese (who perhaps don’t understand what the name means when it’s written in English), had a semantics challenge on their hands before they’d made a single contact in China.

The solution was a nuanced masterpiece of linguistic gymnastics worthy of Confucius.

The word “village” (in English) features in a discreet font on the shiny white sign at the entrance to the lake-dotted landscape. But next to the Roman alphabet, in larger Chinese characters, are the words “Yi Ou Lai”, which roughly translates as “Radiance from Europe”.

On such rocky outcrops of cultural difference do invading businesses smash and splinter. But Value Retail does not do smash or splinter. Since facing down initial scepticism that a US-styled operation could work in the UK, it has seen the original Bicester Village become second only to Windsor Castle as the Chinese tourist’s most popular UK destination outside London. Value Retail has since opened a further eight successful European outlet destinations, including Milan, Paris, Barcelona, and two in Germany.

China, however, is in a different league numerically and culturally. Every care has been taken to flatter local sensibilities, from feng shui-ing the site to installing auspicious granite boulders in the gardens. The pavilion on the far side of that ornamental bridge, designed to house exhibitions of homegrown design and the local part-government-owned five star Fairmont Hotel, reinforce the impression that a trip to Suzhou is more than a gratuitous retail hit – it’s a self-improving cultural and leisure experience.

“Europe,” as Scott Malkin, Value Retail’s founder and chairman, told me, “has no further need for retail outlets. It’s all built out. China, on the other hand, had none.”

At least none that approached the luxury levels of service, valet parking, VIP rooms and architectural flourishes that have become Value Retail’s calling cards. The country, according to Malkin, was crying out for a touch of Value Retail’s magic, which turns the once-uninspiring task of truffling through last season’s mark-downs into a life-enhancing experience.

Western brands operating in China were certainly pleased to see him. A prestigious label manifestly can’t risk jeopardising its status by selling in substandard outlets, but slowing consumer spending in China means that finding a way to maximise sell-through has become all the more pressing. 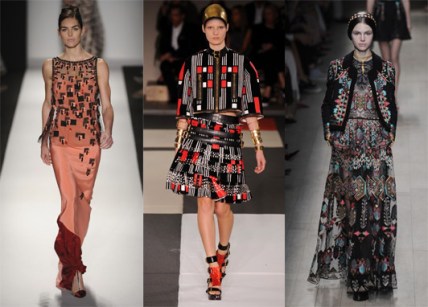 Carolina Herrera, Alexander McQueen and Valentino will all have stores at Suzhou Village. Photo- Isidore Montag

More shockingly, import and export taxes levied on foreign goods are so high that if certain lines don’t sell, it has been more cost-effective in some cases to burn them rather than ship them out of the country to a second market.

Value Retail’s arrival in China is an elegant solution to a worrisome blockage in what was once a fast-flowing river of big-ticket luxury goods selling at full price. Brands will manufacture some products exclusively for Value Retail’s outlets (there will be several eventually), as they do for the European villages – there isn’t enough surplus product to keep the outlet stores full all year without – but it will be tightly audited and, as in the European outlets, there will be signs by the counter explaining that not every piece of merchandise began its journey in a full-price flagship store. Given the headache brands have traditionally had policing all the fakes in China – some blatant rip-offs, others astonishingly convincing – the appeal to both brands and customers of a trustworthy conduit for marked-down products is obvious.

Local Chinese officials have warmly welcomed Value Retail – in fact, they wooed the company, impressed by its emphasis on service and its credentials as tourist attractions in Europe, where the competition for bona-fida heritage sites is tough. Keen to think beyond the low-wage industrial output that has been the economic model for the past two decades, the government is looking to tourism – specifically, retail tourism – as a new engine of growth. In addition to the Suzhou Village outlet, with its allusions to Suzhou’s illustrious silk traditions, the government invited Value Retail to build a second village on the edge of Shanghai, by the Yangtze River, two and a half hours drive from Suzhou and, crucially, slap bang next to a vast Disney, right in the middle of Shanghai’s new international tourism and resorts zone, which the government expects to become the biggest tourist draw in Asia.

None of this has yet been built. Roughly the size of Monaco, it is a vast lunar landscape at the moment, riddled with cranes and scaffolding. By the end of 2015, after Disney, the government and Value Retail have invested $5.5 billion in it, there will be a themed Toy Story Hotel close to where I’m standing, a Well-Being Zone, a man-made lake and high-speed rail communication with downtown Shanghai. The catchment area for Shanghai Village holds 330 million people, most of them keen to become consumers.

But these will not be the indiscriminate spenders of recent times. The more sophisticated middle- and upper-income Chinese are tiring of the blingy baubles and eye-watering prices that Western brands have been peddling here since the mid-Nineties. They certainly don’t want to feel they’ve paid over the odds for them. Value Retail’s focus on style rather than throwaway fashion (after all, it’s not selling this season’s latest hits) resonates with them.

“There’s an educational element. The 20th century was an aberration in Chinese history. Before that, they were great connoisseurs of luxury and revered fine craftsmanship as far back as 2,000 years ago. On quite a deep level, learning to be a discerning shopper is about reconnecting with their past.” 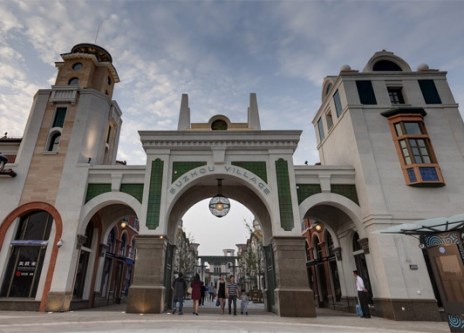 The entrance to Suzhou Village