James Hilton’s Lost Horizon, one of the earliest mass-produced paperback novels, is known for its simple yet elegant depiction of the idyllic Shangri-La, where man lived in harmony with his fellow man and nature in a secluded self-contained paradise.

At the heart of Hilton’s fictional utopia is Shangri-La’s lamasery, which clung to a rocky, lifeless mountainside with “the chance delicacy of flower petals impaled upon a crag”. The massif to which it was attached, the snow-capped Karakal, dwarfed the spiritual compound. Far below the rarefied air of the lamasery lay a lush, temperate valley where villagers enjoyed bountiful harvests and a bucolic lifestyle characterised by moderation – most of the time.

These fascinating untamed areas have been made more accessible to travelers by premium travel company WildChina, which offers package and bespoke tours in this peregrine parcel of land that historically marked the end of Chinese influence and the beginning of Tibet.

WildChina founder and Yunnan native Mei Zhang considers this part of Yunnan, featured in her company’s “Secrets of Shangri-La” tour, to be one of the top areas in the Middle Kingdom for travellers searching for outdoor adventure, cultural richness and, at the end of the day’s exploration, rustic luxury.

Shangri-La is, of course, a fictional place. It is widely believed that Hilton’s imagination was kindled by the writings of botanist-adventurer Joseph Rock, who in the 1920s explored the Tibetan regions in modern-day Yunnan, Sichuan and Qinghai provinces. National Geographic published several of Rock’s articles to the delight and disbelief of a large Western audience, most certainly including Hilton, whose account of Shangri-La was published in 1933.

In January of this year, Shangri-La leapt back into the collective consciousness when the ancient town of Dorkhar disappeared in a tragic conflagration. Known as Dukezong in Chinese, Dorkhar was an important part of the cultural identity of the county in northwest Yunnan province now officially dubbed Shangri-La. 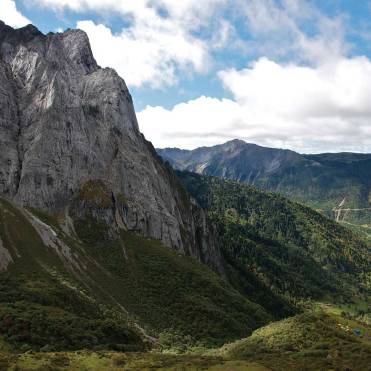 The picturesque scenery of the Abujee hiking route 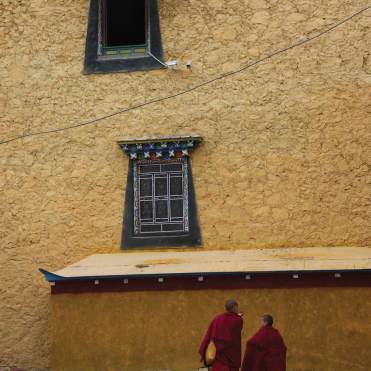 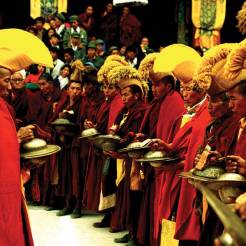 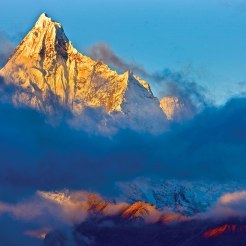 Mt. Kawagebo, the major peak of Meili Snow mountains. It is one of the holiest mountains among Tibetans 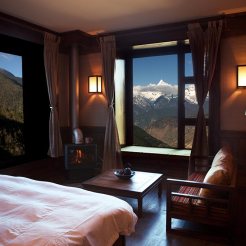 More than 3,300 metres above sea level, Shangri-La had previously been known as Zhongdian in Chinese and is still referred to as Gyalthung in Tibetan. It was renamed Shangri-La in 2001, after competing with other counties in the region seeking to cash in on the name.

Despite a perplexing assertion by the Chinese Communist Party that it had ascertained the location of Shangri-La, it is not difficult to imagine that portions of the mythical place in Hilton’s novel could have been inspired by a combination of locales in Yunnan’s northwest between Shangri-La county and Tibet.

The lamasery in the novel shares many similarities with the Ganden Sumtseling monastery in Shangri-La county. Further northwest, the small town of Benzilan is perched above the Jinsha River, the headwaters of the Yangtze. At an altitude of 1,900 metres, Benzilan, like the valley in Hilton’s book, is dotted with traditional Tibetan homes and is capable of sustaining a variety of agriculture unimaginable elsewhere in the region. Lastly, a real world parallel to the fictional Karakal can be found at the Yunnan-Tibet border, where the forbidding Kawakarpo range’s un-surmounted Kawagebo Peak rises to a majestic height of 6,740 metres.

“The soaring peaks and deep valleys in this part of Yunnan have created some of the most world’s most unique biodiversity and fostered hidden pockets of ethnic Tibetan communities and even Muslims and Catholics,” notes Mei Zhang.

After a short 45-minute flight from Yunnan’s capital Kunming, the traditional Tibetan charm of Songtsam Shangri-la can be found on a hillside next to Ganden Sumtseling, commonly called Songzanlin in Chinese. Upon arrival at this one-of-a-kind boutique hotel, guests are greeted with cups of hot ginger tea, which both soothes and reawakens the senses.

Songtsam Shangri-la is the first of five unique boutique hotels built by Songtsam Lodges between Shangri-La and Tibet with traditional Tibetan aesthetics in mind. Songtsam Lodges founder Baima Dorjee told me over lunch at Songtsam Shangri-la’s exquisitely understated restaurant that despite northwest Yunnan’s physical beauty and cultural diversity, most lodging failed to meet the needs of travelers from afar in search of something special.

“What is travel?” the local Tibetan and former documentary maker asked me (something in the air here lends itself to big questions).

“The answer is different for each person. There are many different ways to travel, but there are certain things that every traveller hopes to have.

Of the numerous destinations people love to visit in Yunnan, most don’t offer the basic conditions that travellers seek, such as comfortable rooms, gourmet dining, cleanliness and safety. For overseas visitors and Chinese from more affluent parts of the country, this can lead to cultural misunderstandings.”

Such misunderstandings are nonexistent at Songtsam Lodges, where five-star service is complemented by local hospitality. Furthermore, the location of each lodge facilitates individual or guided exploration of the sacred architecture and geography of this very special region…Read more in Quintessentially Asia.