The Bordeaux harvest is a special time of year, especially at Cheval Blanc where Daniel Jeffreys went to pick grapes for two of Europe’s richest men.

It is a great tradition of Bordeaux wines that the estate managers of the great chateaus and their owners invite friends and family to participate in the Vendange, the annual harvest of the vintage. Pierre Lurton is the man in charge of Bordeaux’s Cheval Blanc (he also has stewardship of Chateau Yquem) and he reports to the estate’s owners, none other than LVMH chairman Bernard Arnault and Belgian businessman Albert Frère, who began his life making nails and is now Belgium’s richest man. Last Autumn his trio invited me to become a harvester for the weekend and there is no better way to enjoy the French autumn or the Bordeaux countryside.

Cheval Blanc is one of only four Bordeaux wines to receive the highest rank of Premier Grand Cru Classé (A) status in the Classification of Saint-Émilion wine, along with Château Angélus, Château Ausone, and Château Pavie. Many say that among these four, the “house of the white horse” is the best, especially now that Arnault and Frère, under the guidance of Lurton have invested heavily in new facilities, building a chais that opened in 2011 and is designed to bring even higher quality and consistency to Cheval Blanc, which in 2012 saw its new vintage start selling at 4,500 pounds per case, with its understated, fresh, elegant nose, beautifully pure fruit and lovely, silky tannins bringing it a higher rating than the well regarded 2011.

The “cellar under the hill,” as Christian de Portzamparc, the project’s architect, calls it, extends from the château, as if “the ground rises, carried by cement sails, toward the light and the sky.” From the outside it appears more like a space ship that has dropped down next to the 19th century chateau’s charming chapel to suck up a few litres of fine Bordeaux before returning to its own galaxy. 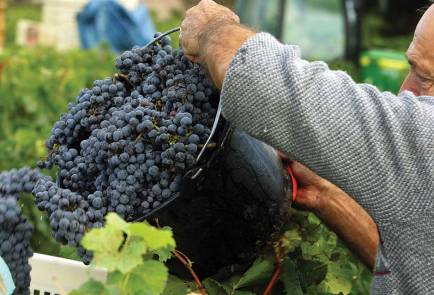 A worker collects the grapes in the Chateau Cheval Blanc estate, one of the greatest crus of Saint-Emilion, on the first day of the grape harvest there

Inside Portzamparc’s chic version of the USS Enterprise, natural light filters into the cellar, where the design showcases simplicity, elegance and muted stone. The concrete vats (unique to Cheval Blanc among the four Premier Grand Crus) come in nine formats, from 20 hectoliters to 110 hectoliters. The concept of the new cellar turns around selection by plot. “We have fun searching for the characteristics of each plot,” says Lurton. “We play with the plot’s components which includes gravel, clay, sand, Cabernet Franc, Merlot, different clones and rootstocks to build the wine’s blend —looking to gain purity, elegance and precision.”

The new cement vats were custom-designed by de Portzamparc and created for Cheval-Blanc at a factory just outside Venice. They make the inside of the chais look like a futuristic cathedral, or one of those alien structures from which scary things emerge whenever James Cameron is around. I trust my involvement with the 2013 vintage does not spoil Lurton’s determined search for control and consistency for the Bordeaux Vendange weekend demands that visitors become fully involved in every aspect of the harvest.