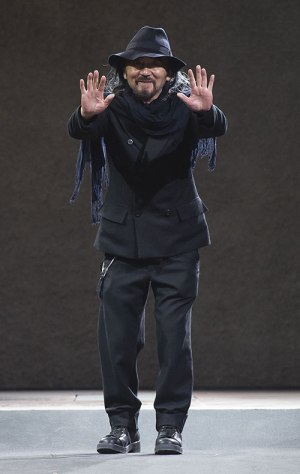 Yohji Yamamoto is one of the most revered designers in fashion with a cult following in his native Japan and acolytes all over the world. He came to Hong Kong this week to launch Y-NOT, with help from the HKDI’s Fashion and Image Department. He gave no press interviews but deluxewords stylist Cheung Mei Ting Ice was on hand when he gave a master class in Wan Chai.

“I was thrilled when I heard that the HKDI was going to work with Yohji Yamamoto, Mixmind’s Mao Ji Hong (the owner of Exception) and Stanley Wong to give branding and marketing advice on the launch of Y-NOT. And I was delighted when I was invited to a workshop with the designer at a store on Star Street that the HKDI’s Fashion and Image department had helped select and style.

At the start of the workshop the room was full of people sitting on the floor, eagerly anticipating the designer’s arrival. It was like waiting for a play to start in the theatre. A group of people in black & white appeared, moving with calm determination, just like Japanese samurai going on a mission in a quiet and mysterious way. I knew this was Yohji’s samurai team and he is the general: A very smart, talented general but one with a kind and low profile.

His samurai led him to his seat where he sat down and crossed his legs in a way that was quiet and elegant. I was surprised when Yohji began to speak. His voice is so soft and slow, like a girl whispering. It feels gentle and comfortable. While everyone was paying attention to the speech, somebody’s phone began to ring and it broke the calm atmosphere. It turned out the phone belonged to Yohji. He took it out and checked and said, “It is my girlfriend”. Everybody laughed. I realized that he has more than one talent – he is a subtle comedian as well as a great designer. The rest of the workshop rode smoothly on the back of his warm sense of humor.

An important aspect of the project between HKDI, Mr Yamamoto and Mixmind is that the designer will have a series of sessions with students. We have so much to learn from such a design master and it is a treasure for the HKDI community to have this opportunity.

During the Q&A session on Star Street, students had a chance to ask about the secrets of success in the design industry. One student asked how to explain a design concept to people who seem like they don’t understand. He said ‘there is no need to tell them.’ This student was confused and asked if that meant she didn’t need to explain her work to her teachers in future. One of the guests at the event explained for her. “I understand Yohji’s answer,” she said. “There will always be somebody who doesn’t understand our designs or even don’t like them. However, we shouldn’t give up but keep moving forward and insist on our beliefs. People’s opinion is subjective especially with regard to art and fashion and there will be someone who likes your work if you believe in it enough.”

Throughout the session Yohji kept reminding us that the key to success as a designer is to be very hard working. He said if we need to be creative, we should go out and explore the world, not just sit in front of the computer all the time.

He’s right. Technology has become advanced and convenient but it has made people lazy and less sensitive because they lack the motivation to feel, touch and sense the beautiful things that are around us. The Internet’s knowledge is limited, but knowledge in the universe is infinite. As Yohji said, if we want to be creative and have unlimited inspiration, the best way is to travel extensively, just as he has. I was so glad to have had the opportunity to attend this workshop and learn from Yohji Yamamoto, Japan’s elegant king of noir.”

Yohji Yamamoto’s company filed for bankruptcy in 2009 and now is owned by Japan’s Integral Corporation, but being an “employee” has not dulled his wits or his rebellious criticism of the modern fashion industry.

Here are some of his recent thoughts:

“Young people, be careful. Beautiful things are disappearing every day. Be careful.… You don’t need to be [shopping at fast-fashion stores], especially young people. They are beautiful naturally, because they are young. So they should even wear simple jeans and a T-shirt. It’s enough. Don’t be too much fashionable.…The brand advertising is making you crazy. You don’t need to be too sexy. You are sexy enough.”

Let’s hope A & F can hear that message. And:

“We are losing those young people because we have too much information by media, especially [through computers]. We can see everything at the same time, so already they are spoiled too much. So when we have talk sessions with young designers or students, I tell them: “Be bright. Your eyes have become dirty.”

So turn off the computer and go clean your eyes. Yohji said so.