Using skills from the 21st century scholars are putting digital techniques to work in an effort to preserve the endangered artefacts of China’s Dunhuang region, where the Mogao caverns represent one of the world’s most important repositories of ancient art. As Daisy Zhong reports, part of their solution has been to digitally recreate the caves in Hong Kong. .

Chic leggings were highly fashionable in the Tang Dynasty 1000 years ago, and were worn inside translucent gowns or plus fours,” said Lee Mei-Yin, a researcher with the Dunhuang Academy and a renowned scholar of Dunhuang culture, “Tang people were so bold and open in their make-up and dress.”Lee saw the leggings depicted in a mural during her first visit to the Mogao Grottoes in Dunhuang, and her astonishment at the stylish collections of clothing displayed on the ancient murals has only grown during her 22 subsequent visits.Located in a desolate part of northwest China, the Dunhuang UNESCO World Heritage site is a treasury of Buddhist art displayed in grotto temples that abound with murals, statues and architectural monuments created from 366AD to 1368AD across 10 dynasties. These Buddhist arts, originally designed to assist devotional contemplation, eventually acquired a narrative purpose as well, telling a story through time about the peoples who created them.Echoing the resolve of ancient Chinese artists and craftsmen who created the unique artworks, a group of Dunhuang devotees initiated an unprecedented digitisation of the murals and sculptures in 2010. In the process they have shed light upon important issues of cultural sustainability in relation to the oldest forms of heritage from the ancient world.The Dunhuang Academy, the custodian of the site, began the process by undertaking extensive digital imaging of the Mogao Grottoes. The photography, unparalleled in scale when compared to other world heritage sites, involved a race to “capture” and preserve the caves before any more degradation can occur. 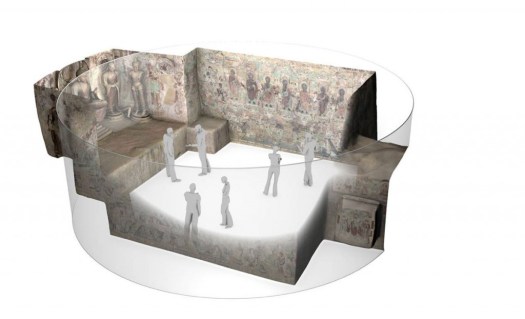 After photography, scientists at the City University of Hong Kong (CityU) combined the high-resolution images, with laser scanning data, animation and 3D modelling to tell stories about the extraordinary wealth of paintings found in the caves at Dunhuang. Over a six-month period, the project’s team of artists and animators also redrew, restored and re-coloured key iconographic elements in the wall paintings, and created 3D animated objects and dance sequences.

These animations were supplemented by sound design based on research into traditional Chinese music and the recording of similar instruments that are still in use today, including FangXiang (metallophone), PaiXiao (pan flutes), Dizi (flute), Sheng, Yaogu (waist drum), Ruan (lute), Guzheng and Konghou (harp).

As a showcase for the initial fruits of this ongoing project, an exhibition titled Pure Land: Inside the Mogao Grottoes at Dunhuang, was held at CityU from March 17 to April 7, 2012.

Visitors were asked to step into a large 360-degree panoramic projection theatre, where they were immersed in the seemingly true-life experience of being inside a cave temple, seeing its magnificent Buddhist wall paintings at 1:1 scale. A “virtual magnifying glass” allows the viewer to zoom into the painted surface of the mural and see its details in ultra-high resolution. Figures and objects
in these paintings are dramatised by means of spectacular interactive 3D animations and digital effects that reveal their painterly beauty and underlying narrative meanings.

The whole project, recasting the entire Dunhuang experience in a way that will both intensify and distance it, is part of an attempt to solve the tension between the desire to show this rich and important treasury to the world and the on going protection and preservation of the caves.

Although the site used to be an oasis in the Gobi desert at a crossroad on the Silk Road, Dunhuang’s environment has deteriorated over the last few hundred years, while tourists have swamped the site in the past few decades. The caves now suffer from high levels of carbon dioxide and humidity that are severely undermining conservation efforts.

In an effort to limit deterioration, Dunhuang Academy has agreed to only open a few dozens of the caves among the 492 Mogao caverns that still contain rich murals and sculptures. In those caves that are open, visitors may use pale torchlight to examine the cave walls while glass windows often stand between the viewer and the wall to ensure the murals are protected.

On the contrary, the Pure Land projection theatre, although virtual, can yield a better visitor experience. Wu Jian, Director of the Digitisation Centre of Dunhuang Academy said, “Our digitisation is not simply cameras plus video recorder; it is the high-tech plus arts instead.”

The work of Pure Land has also helped with the research of the ancient mural designs. “If not for the digitisation of the murals, I could not have seen so many details to interpret and analyse,” says Lee Mei-Yin, who came to HKDI to lecture about Chinese textile,
as she points to the leaf veins on plantain trees between two Buddha, a transparent glass bow held by Medicine Buddha, the enchanting eyes of a Bodhisattva, and the blusher on a goddess’ face, all of which are within a few centimetres’ width in the digital recreation.

From 200BC until 1400AD, Dunhuang was once a nexus of cultural interchange via the Silk Road between China, India, Persian, Greco-Roman and Central Asia. From the amplified images, Lee identified the fashionable designs of carpets, women’s wear and children’s wear in the Tang dynasty.

“Chinese culture is so old and so rich, that it would be highly beneficial for design students to study its roots and lay an excellent foundations for their design career,” says Jimmy Lo Chi-Ming, the Vice-Chairperson of Friends of Dunhuang, an NGO made up of volunteer entrepreneurs who care about Dunhuang’s heritage. They supported the whole digitisation project.

“HKDI has a lot of design talents, from dress designing to multimedia,” says Lo. “I saw the Miao project done by HKDI students in 2008, and I thought that’s what they should do in cultural sustainability design, so Friends of Dunhuang made the necessary connections for students to visit some of the caves normally not open to the public and get a sense of their veiled beauty.”

During the trip, HKDI teachers and students went to the Mogao Grottoes for a two-day tour last October and had a brief exploration. Students will go to the site again for a seven-day series of detailed observations in the later half of 2012. They will study and re-create the processes found in ancient arts and use the images of the past as a form of inspiration. Design projects with different focuses such as dresses, architectures and sculptures will be explored.

The Dunhuang trip is also in tune with the objectives of an on-going “Cultural Trips” project that started from 2008 in HKDI. By visiting places of cultural significance in China and exploring ethnic culture and lifestyles, students apply living culture in the real-life design projects. 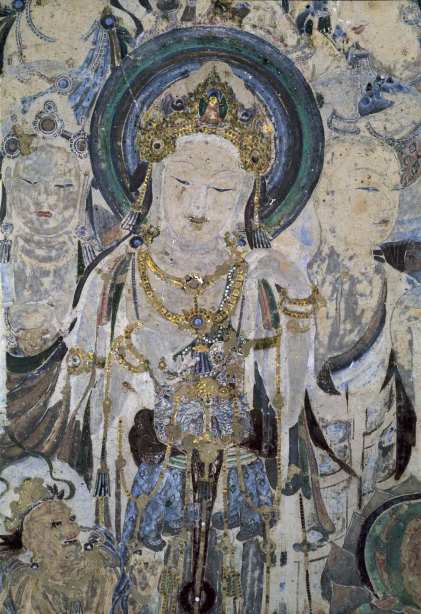 “This is also an important part of the purpose of our digitisation project. Those important historical arts are not simply frozen like fossils in that ancient space and time, but have lives – they are constantly providing nutrients for ideas and inspirations. I believe it has the vibrancy to continue its liveliness.”

Lou stressed the importance of students acquiring sound knowledge of the cultural and historical backgrounds of Dunhaung art before they set sail for a successful cultural trip.

“A central issue of art and design is to answer the question of where we come from and where we are  heading to. I believe Dunhuang arts shed lights upon this. The revival of tradition and the continuation of a culture depends on a later generation’s self-willed act of re-creation.”

Lou masterminded the animated re-creation of some of the elements on the murals. These include 2D cut-outs of the seven Medicine Buddha appearing to emerge from the original mural repainted in their original colourful state, 3D animation whereby the orchestral instruments and the Medicine Buddha’s canopies become three-dimensional solid objects floating and rotating in front of
the actual painting, and a live video of 3D digital recording made of dancers from the Beijing Dance Academy who re-enact the dances shown in the mural painting.

She regards these innovations as a beginning and a tribute to the ancient painters who were earlier practitioners of “cultural sustainability”. “One thousand years of artworks are trying to convey the same Buddhist values through similar expressions such as Feitian, but each period has its unique, creative patterns.”

“Just like the artists who painted the murals, one needs to know how to cope with the loneliness of being a Dunhuang scholar,” says Wu Jian.

“For nearly half a century, with very poor material conditions, generations of these scholars regarded the Grottoes as their homes, immersed in solitude. Such tranquil minds and meticulous attitude are especially rare and precious in today’s anxious, hectic world.”

With such guiding spirits, HKDI students will release their design results at the end of this year, sharing with all innovative re-creations of the gentle touch and timeless glamour of Dunhuang art.