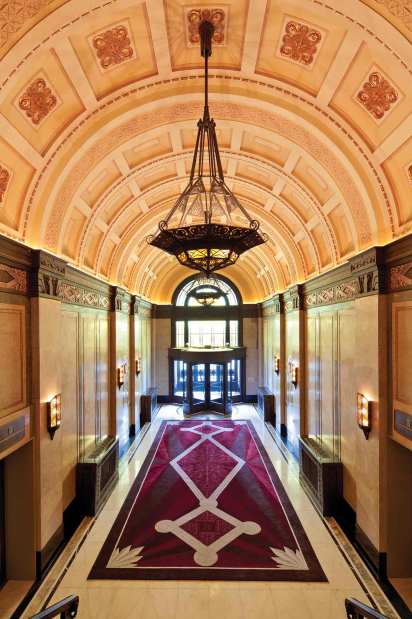 When a callow youth I played Elyot, one of two husbands in Noel Coward’s Private Lives, his brilliant satire on marital manners.The play was regarded as too risqué by the British censors when it began its previews in 1930 and its many steamy scenes might be explained by the fact that Coward was running a fever when he wrote Private Lives. What I did not know is that Coward suffered his attack of influenza and creativity while staying at the Cathay Hotel in Shanghai, now known as the Fairmont Peace Hotel.

Four decades later the hotel was a centre for the Gang of Four and was used by Zhang Chunqiao as he headed the Shanghai Commune. These are just two of the many compelling details that make a stay at the Nanjing Road property such a fascinating experience, and for history buffs there is the gorgeous Peace Gallery where documents, postcards, paintings and artefacts from the hotel’s past can be viewed in an Art Deco setting.

The hotel is an Art Deco lover’s dream made real, with original Lalique glass lanterns, sconces, chandeliers and wall decorations. The renovation of the building between 2007 and 2010 restored the stunning octagonal glass rotunda, which is surrounded by four copper, silver-coated murals.

I was staying in a graceful suite on the sixth floor with a view down the Bund and across the Huangpu River, from where I could plan my visits to the hotel’s famous Jazz Bar, a high tea in the elegant Jasmine Lounge and a treatment or two at the Willow Stream spa.

To sit at the beautifully polished desk and write as the sun sets over the bustling River traffic is to feel connected to all the emotions and drama that the hotel has witnessed. Trust me, you won’t want to leave.