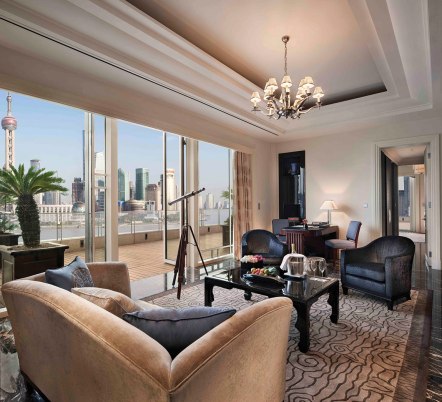 As a child in England in the 1960s I had a dream of visiting Shanghai. The auteur in my head imagined a place of intense struggle, suppressed romance and dark intrigue. I saw government officials following my every move and tour guides who doubled as jailers, leading me from decrepit buses to miserable tourist hotels.When I finally made it to Shanghai in 2010 I was met by a charming representative of the city’s Peninsula hotel on the Bund. He helped me to get past immigration as if it were a red velvet rope for a party at which I was a VIP guest and then settled me into the back of a Rolls Royce Phantom. The ride into the city was punctuated by the frequent passing of bullet trains running on elevated tracks alongside a brand new highway. It was like a movie, but not like the one I had imagined in 1968. This was more like science fiction.

I returned to the Shanghai Peninsula in June and found the property had lost none of its finesse or charm. From the housekeeping staff who took custody of my unruly suits, made mad and crinkly by a ten day visit to London, to the room service waiter who brought me a perfect pastrami sandwich, to the lovely DVD librarian who arrived with a copy of The Queen (starring Helen Mirren) for me to enjoy once my work was done, the Peninsula conveyed the impression that it was a cradle and I was their child, that my room was a sanctuary from which I could do business in complete comfort.

On the Bund side of the hotel the Peninsula’s rooms and suites have splendid views of the Huangpu River with its dense procession of barges and bulk carriers.

I had arrived in Shanghai from London where I had been a guest of Pernod Ricard’s Royal Salute at the Queen’s Diamond Jubilee. The pageant I witnessed on the Thames was ceremonial in nature, celebrating past glories, commemorating an age when there was a Britannia and its Navy did rule the waves, including some of those that now lap against the piers that punctuate the Huangpu.

The daily procession viewed from the Shanghai Peninsula is no less impressive than the Thames pageant but it is paying homage to the future, to a time when the Chinese economic ascendancy is complete. And maybe, in one hundred years from now, the Huangpu will see its own ceremonial pageant and it will witness an outpouring of delirious nostalgia for the early years of the 21st century, when a new empire was forged.

Should that happen I suspect the Shanghai Peninsula will still be the best place to enjoy the Huangpu spectacle. Its elegance and its staff’s passion for service has got so much better since its soft opening, when I arrived by Rolls Royce. Give it a few more decades and it could become the most revered hotel in the world. After all, it already has the world’s best pastrami sandwich. Trust me, you won’t want to leave.