The Art World searches for a more conservative way to thrive

It’s always been there, if you’ve known where to look, but a more subtle, cerebral and contemplative art is suddenly finding its voice, says emma crichton-miller. 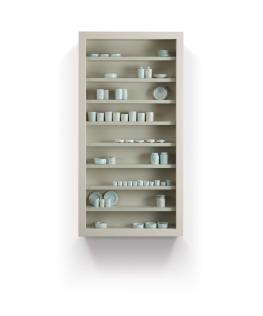 One such moment was 15th September 2008, the day Lehman Brothers filed for bankruptcy and, a few hours later, Damien Hirst opened the first part of the, Beautiful Inside My Head Forever, at Sotheby’s, London.

There, as carnage ensued in financial markets around the world, Damien Hirst’s The Golden Calf, a calf preserved in formaldehyde with gold-plated horns and hooves, sold for £10.8 million, in a sale that made £111 million.

The sale, with its attendant publicity, was hailed by many as a last trumpet blast for a brash and blatantly commercial kind of art which had dominated the pre-crash contemporary art market.

By the time Marc Quinn came to install his 50 kilogram, 18 carat gold statue of Kate Moss, worth £1.5 million, in the Nereid Gallery at the British Museum, just a month later, such gestures were already looking anachronistic – part of a whole other fallen world of artistic values.

As it has turned out, the contemporary art market has not collapsed, as some foretold, nor have artists uniformly switched tack to adopt new styles better suited to our chastened times.

There is still plenty of loud, declarative art being made, vying for the attention of collectors keen to add the latest trophy to their private galleries. Alongside, however, artists who for years have been developing quieter, subtler, lines of work, of little or no interest to a fickle publicity-driven audience, have begun to attract attention once again.

The language and tone of voice in which their work can be talked about and appreciated is once again current, and both galleries and critics have regained the courage to show and review such work. In turn younger artists with the determination to buck recent trends in favour of the hidden, the not obvious, have found their work being noticed.

This discreet art is not necessarily small-scale or timid, but it does not reveal its secrets immediately, requiring its audience to look beyond the surface, to wait and dwell with opacity until the work yields.

The ability to hint at rather than declare, to accommodate the truth rather than to spell it out, to come at things delicately rather than confront them head on, has always been a potential source of power for artists.

In every era, whatever the prevailing style, the pole of exuberant self-expression has been balanced by artists for whom reticence and discretion are the source of their power.

Vermeer’s quiet women countered the emotional intensity of Rembrandt’s portraits and self-portraits, Chardin plumbed the significance of a bowl of wild strawberries or a downcast gaze where Fragonard teased overtly and Turner sought the sublime where all form dissolves, while Constable attempted to capture every fleeting moment in oils. 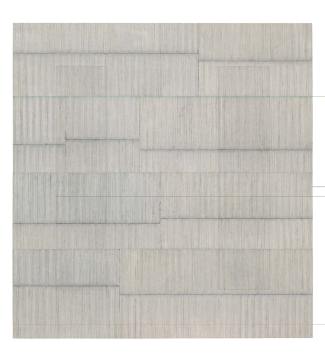 Rebecca Salter, detail of Untitled H043, 1993. Courtesy of the Artist

In the twentieth century, the contrasts are even starker – between, for instance, the Italian futurist painter Giacomo Balla straining to capture time itself in a whirl of paint, where Giorgio Morandi’s simple bottles express eloquently, in stillness, their sympathy with our fragile mortality.

In Britain, one aspect of modernity was manifest in the revolutionary, assertive pre-war sculpture of Jacob Epstein, Gaudier-Brzeska and
Eric Gill, but quite another thread emerged in Ben Nicholson’s cool post war abstract compositions.
Even in America, the heroic abstract expressionists – Jackson Pollock, for instance, or de Kooning – whose works are large, gestural and noisy, found in their midst Jasper Johns, who, with his repeated motif of the map, the flag and the target, pioneered a more elusive approach to the art object. As he said of his canvases, ‘There may or may not be an idea, and the meaning may just be that the painting exists.’...Read more in Quintessentially Asia.