Among the artists featured at this year’s Art Basel Hong Kong none was more fascinating or enigmatic than Shinji Ogawa. The Japanese artist has drawn meticulously accurate pieces based on old postcards, recreated famous masterpieces with the key characters absent and made his admirers question humanity’s place in the universe. Daniel Jeffreys reports. 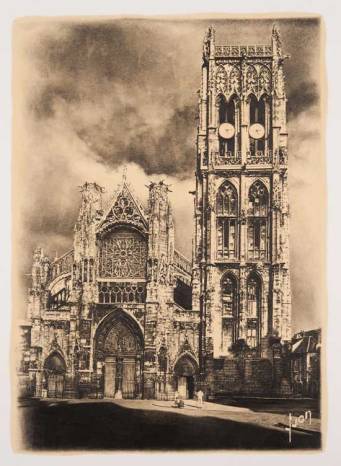 The Lovers (Eglise Saint-Jacques de Dieppe)/1999 61X46cm, Oil and Pencil on Paper, A work where a church clock in France has been drawn twice to represent Ogawa’s “pefectionized” world

It was the first day of this year’s Art Basel Hong Kong when I came upon the Standing Pine gallery and the work of Shinji Ogawa. I was spellbound by his pencil drawings of Mont St Michel in Brittany.

It is such a familiar landmark and it seemed like Ogawa had reproduced a postcard version of it with photographic accuracy, until I looked closer and realized that the artist had made minute additions and subtractions. I had entered a new world, one in which metaphysical questions of appearance and reality are posed within a rigourous aesthetic framework and answered with the technique of a modern day Da Vinci.

Ogawa was born in 1959, in Yamaguchi and educated in Japan. In 1994 he began his series Without You in which he re-conceived works by the likes of Vermeer with a central character absent. When Ogawa reproduces a post card of a European destination (never Japan) or makes a fresh version of a masterpiece he adjusts the dials of truth and perception, tuning in details that have perfect accuracy and yet are totally unreal.

“The concept of Without You is subtraction, in which an imaginary story fills the empty space vacated by the main character,” he says. “This destroys the relationship among the other characters and objects which surrounded the deleted character and the role of the supporting character has no meaning anymore.

Ogawa says that when the empty space is painted a new relationship is created among the characters and objects and even the meaning of original work is renewed, by bringing a new order to the canvass. The artist believes this process reveals a deep truth.

“There is originally no meaning in the world,” he says. “It’s the condition of consciousness and the way that people acknowledge what they see that gives meaning and definition to the world.”

But Ogawa’s work is not just about taking away. In other work, especially from the series Perfect World and Rondo he adds objects, for example in Pisa 2 where we are confronted by two leaning towers. 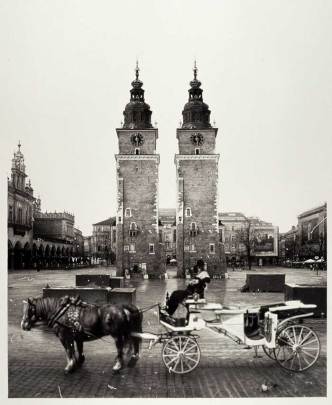 “In these works, identical objects are repeated many times, which never happens in reality,” he says. “It’s like a young person who will never meet himself when he’s older and that’s a paradox. It is forbidden for identical objects to exist and if they do the world of singularities that God created for his own game will be finished. I call this series Perfect World because such perfection duality is a paradox. In both types of series, the viewer will experience something that shakes their fundamental perception of the world and the way they live in it.”

At the heart of Ogawa’s work is his belief that the world we see is just one layer of reality and that as we switch our gaze from an object and back again we are perpetually seeing different layers. He derived this idea from the way nature’s power affects his consciousness.

“One day I visited Shinshu district in Japan’s Nagano prefecture and the reality of the landscape overwhelmed me,” says Ogawa. “When I stood in a place surrounded by two mountains, I lost myself because there was too much information. The landscape consists of many layers and our perception of the landscape changes in unpredictable ways all the time. The landscape has no limit.”

With such a sophisticated philosophical foundation to his art it’s inevitable that Ogawa should approach his work with the goal of answering metaphysical questions. He talks about “exploring the hidden construction in the world.” 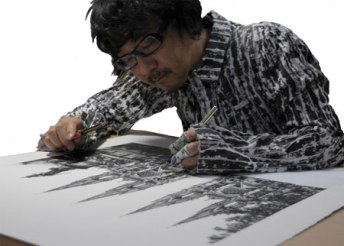 Ogawa at work in his studio

“I live in a world that is part of a larger construction,” he says. “So, I am interested in the way the construction of this world is influenced by invisible interference from outside. The first thing for me is to escape from limitlessness. So, I change the three-dimensional world to a two-dimensional world.”

But even with this element of control Ogawa says that the exploration of time and space is confusing and sometimes fills him with foreboding.

“At first, I feel like I am wandering inside a deep fog.  After getting lost, I bump into part of a large object. I don’t know the whole shape, but by touching many places, I imagine what it looks like. Right after that, I recognize another different object existing nearby. I identify relationships between the first object and the new one. This might be just my imagination or the truth of how objects are related to each other. This is how I understand the world.”

Ogawa’s sense of the ambiguities inherent to reality and our experience of the external world are shaped by his dreams, which often offer him inspiration.

“I often have new ideas when I am dreaming,” he says. “When that happens, I scribble a memo next to my pillow and start a sketch and when the sheet is full I attach another and sometimes I find I have to go straight to my desk to work.”

This process of dream-to sketch-to finished work is how Ogawa created Bruges, Groentenmarkt (see images in the far left column) in a studio that is a richly layered working environment. 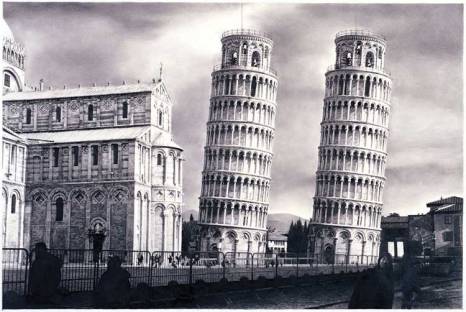 “My atelier is full of old postcards, picture books, magazines and old family albums which I bought in flea markets,” he says. “If I am not making an artwork I look through postcards and I never get bored. I also like to examine my books but I don’t read them, because I am usually disappointed with their reality. An unopened book is such a powerful mystery. When I select an image I focus on the streets and people and wonder ‘What if the landscape in the photograph was symmetric like a mirror? Moreover, what if the symmetry had a few minute degrees of difference? Would it be possible to describe such images?’ This was how the idea that symmetry and asymmetry could coexist came into my mind.” 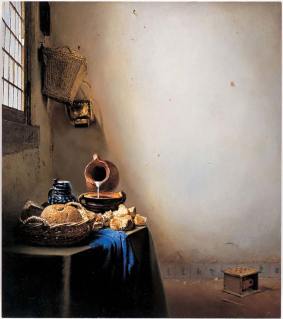 As soon as these expressions and images appear in Ogawa’s head he writes them down in his favourite notebook by using signs and makes simple sketches based on the signs, which then become deeply complex works like Munchen. The spaces in Ogawa’s works are so fascinating and full of characters I wonder if he has a favourite he would like to inhabit. The idea fills him with horror.

“All the worlds in my artworks are like nightmares, so I never wish to live inside them,”

he says. “The least favourable work to inhabit would be one from the Behind You series, which is defined as ‘A work where all the world is present except you.’ Imagine you are standing in front of a mirror. In the mirror, the world behind you is the world where you are the only element missing. The space inside On the Balcony is a cylindrical space that is made from a girl and St Paul’s Cathedral. I can’t stand being left forever in such an uncomfortable world. However, all my artworks describe the world looked at from the reverse side, so that means this world might one day transform itself into a nightmare.”

In his Moire series Ogawa drew upon the vast pile of old postcards that litter his atelier. He selected images of the most well-known landmarks so that his tinkering with the fabric of reality would be more obvious. 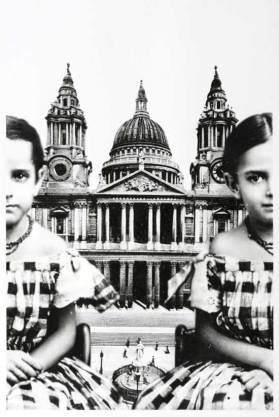 Work from the Behind You Series

“By choosing well known postcard landscapes and using them as my subject, I want to make my changes obvious to everyone,” he says. “I am not drawing the present but a landscape of the past and people from the first half of the 20th century. They don’t exist anymore, but their existence remains in the photograph and in people’s memory. And I don’t use scenes from Japan. These three are significant conditions for me.

“My work can be regarded as meta aesthetic,” he says.

“I want the viewer to recognise that there are many tiny, mysterious matters in ordinary life and people can make themselves sublime by paying attention to them.”

The technical accomplishment of Ogawa’s work is astonishing. A single piece can take hours to examine and there will still be dozens of features that you miss. On returning to one of his works a shift in the way the light falls on the surface can reveal enough fresh layers for it to seem like a new piece of work.

“There technical aspect of my work is not difficult, the difficulty is patience,” he says. “I need so much time to create my work. Every day I spend almost all my time working and I have probably lost many other possibilities in my life. Time has limit. How many artworks can I create for the rest of my life? I know that this question could be solved by calculating with paper and pencil. But I am too afraid to try this. For me, pencil drawing represents the light that shines in the darkness, Oil painting represents the comfortable weather, video work represents the top that keeps spinning. With these three I am always traveling in the gaps between time and space. Art has no borders for me, only possibilities.”