Huang Yao is not a widely-recognised name in the history of 20th Century Chinese art. This is an injustice due to the vicissitudes of history. Summer Cao found out what the recently established Huang Yao Foundation is doing to reinstate this major figure, whose work crossed over from newspaper cartoons to abstraction and back into the pantheon of Chinese art.

In 2004, an unexpected call from the British Museum came to the home of Carolyn Wong, a Chinese Singaporean financial expert. Before she had the chance to make assumptions such as the idea that they might be seeking investment advice, the Museum official explained the call’s purpose: the renowned British institution wanted to acquire the work of Huang Yao, her grandfather.

The request was not entirely unexpected. Since her grandmother’s passing in 1998, a treasure trove of her grandfather’s paintings, drawings, manuscripts and photos had come to light. Wong had already been contacted by a host of publishers, museums, researchers, all of whom professed a strong interest in Huang Yao’s life and work. Every time she took these calls, Wong was astounded by the realisation that the ordinary old grandpa who she knew for 17 years was, in fact, someone quite exceptional.

“I didn’t believe him and didn’t pay much attention when he spoke of his early life,” Wong recollects, still with a trace of incredulity. “I can’t believe that what he told me was true; a lot of his stories actually added up, or were backed up by library documents, newspapers, books and other third party sources.” She once threw away a moth-eaten folder of her grandfather’s work. “I just didn’t know,” she agonises, at the painful memory of her ignorance.

Fortunately, with the help of the National Heritage Board of Singapore that fumigated and catalogued Huang’s work, not to mention the calls that aroused her curiosity, in 2001 Wong established the Huang foundation and began an “inquisition” into his past. In 2006, around the same time the British Museum and the Palace Museum of Taipei made acquisitions of Huang’s work, Wong extended her search to Mainland China, where Huang grew up and found fame.

Best known as the creator of Niubizi, one of the most popular cartoon characters from 1930s and 40s China, Huang was born in Shanghai to a prosperous literary family. They owned a valuable collection of antique paintings including work by Mi Fu, Shi Tao and Bada Shanren. From his early life onwards, under his father’s strict tutelage, Huang learned to paint by copying the masterpieces from his family’s collection and also gained exposure to Chinese history, literature and philosophy.

However, Shanghai was a precarious social and financial environment and his family were declared bankrupt. At 18, Huang started work as a journalist. His abilities were readily apparent and he was asked to create a cartoon character for the Shanghai Post, where he worked. The “magic city” in the 30s was a melting pot where contrasting cultures thrived and intermingled; it led to a golden age of creativity in local literature and art. Being equally inspired by both art and patriotic responsibility, Huang wanted his new character to “change the current negative image of the Chinese in the western media”, “embody genuine happiness and all that is innocent in people”, as well as to “represent the Chinese sense of humour”.

This character proved elusive. In a desperate moment, Huang began to pull funny faces in front of a mirror and found the face he had been looking for in his reflected image. Before long, Niubizi had been created, based on Huang’s own self-portrait. In the eyes of contemporaries, Huang had the appearance and demeanour of a typical Chinese gentleman. As Wang Shizhao put it, “He had a round and darkish face, like a piece of New Year’s cake. He always wore a pair of turtle-rimmed glasses which were popular at the time, he was very energetic – not very tall but not short, either – and could never grow a beard.” 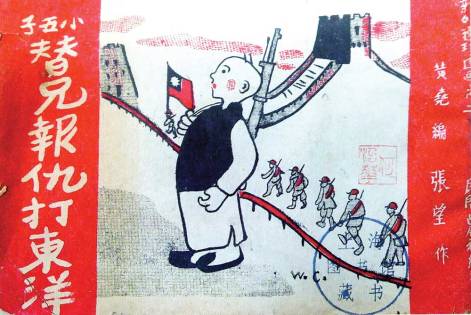 Like Huang himself, Niubizi was bespectacled with a round face. He was given a name that literally means “ox snout”, a self-deprecating moniker that must have sounded endearing to Chinese ears that had absorbed too many foreign languages and sounds. The term “Niubizi” had been a derogatory term reserved for Taoist activists because of their  “annoying” intelligence and self-righteousness – characteristics shared by traditional Chinese intellectuals. Notably, in the history novel Romance of the Three Kingdoms, the term was given to Zhuge Liang, arguably the smartest statesman in Chinese history, by his archenemy Sima Yi, when the latter was frustratingly outmanoeuvered…Read more in Quintessentially Asia.