A history of defacing the Hermes Birkin bag 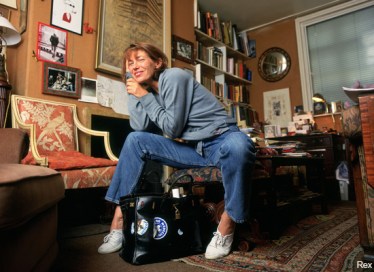 Jane Birkin with the Hermes bag named in her honour, decorated with stickers

Forget private jets and magnums of Cristal, the Hermès Birkin is the international symbol of wealth. Victoria Beckham apparently has a collection worth in the region of £1.5 million. Tamara Ecclestone has 30, each housed in custom-made glass cases in her wardobe. Why, then, does this hand-held status symbol so oft find itself the target of questionable ‘customization’?

First, it’s time for a little bit of history. Are you sitting comfortably? Then I’ll begin.

The bag was conceived in 1981. “I remember it well. I’d been upgraded by Air France on a flight to London, and was sitting next to a man,” Jane Birkin told The Telegraph in March 2012. “I’m not quite sure what type of bag I had with me – my husband, Jacques Doillon, had reversed his car over my basket, crushed it on purpose not two days before. Little did he know that on this airplane journey, when everything fell out of whatever bag I had, the man next to me said: ‘You should have one with pockets’. I said: ‘The day Hermès make one with pockets I will have that’, and he said: ‘But I am Hermès and I will put pockets in for you’.” Read more..