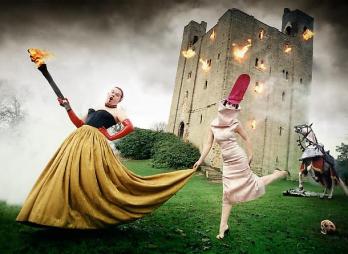 For a time, starting in the early 1990s, Isabella Blow and Alexander McQueen were inseparable—fashion muse and master—lovers without the sex. They shared something else: a self-loathing so intense it would devour them both, with Blow’s suicide in 2007 and McQueen’s in 2010. In an adaptation from her new book, Champagne Supernovas, Maureen Callahan reveals how two great British talents lost the battle of their lives.

From the beginning of his career, in 1992, Alexander McQueen defined himself as a designer who trafficked in raunch, filth, and perversion so heightened it was almost funny. He was an outsider, and he reveled in it, but only three years later, he was losing himself.

He had just shown his autumn-winter 1995–96 collection, “Highland Rape,” and it was his breakout: his models stormed the runway with bare breasts, wearing slashed tartan and lace and punk-rock rubber pants. It made McQueen a star, and now he wanted to fit in with the fashion people he’d once ridiculed: he’d already had his teeth fixed, and would later have liposuction on his stomach and lose the wattle under his chin. Read more.