In September, Louis Vuitton opened a unique maison in Singapore. It is the first store in the brand’s history to be dedicated to travel. The luggage maker’s peripatetic roots were laid down in grand hotels by the great adventurers of the last century, many of whom were writers. Daniel Jeffreys takes a tour of Asia’s four most literary hotels to see how much of their artistic past is still intact.

[dropcap size=small]M[/dropcap]emories of great writers and artists tumble like autumn leaves along the verandas of Asia’s heritage hotels. At Raffles in Singapore, there’s a breezy garden terrace on which Somerset Maugham would take tea and sketch word portraits of colonial scallywags. The Oriental in Bangkok has a garden where memories of Joseph Conrad mingle with river mist from the Chao Praya.

In Hanoi’s Metropole, Graham Greene began to write The Quiet American after swapping stories at the bar with New York Times reporter Tillman Durdin. And in Hong Kong, at The Peninsula, Tennessee Williams came to celebrate the success of A Street Car Named Desire.

These artists were drawn to Asia by its colour and vibrancy, and for experiences that would become scenes in their famous novels. But they came without the benefit of air-conditioned aircraft and lush business lounges. When Greene first arrived in Hanoi there were no limousine drivers to meet him at the airport.

Like everybody else on the Asia trail during the first half of the twentieth century, he mostly travelled by train and ship, risking the occasional white-knuckle ride in a small aircraft that was incapable of rising above the turbulence.

French luggage maker Louis Vuitton, the great malletier of the steamboat era, laid the foundations of his brand upon the needs of adventurers such as Conrad and Maugham, as well as the much wealthier acquaintances they encountered during their travels.

Transcontinental journeys were lengthy before the jet age, and a man needed to carry his life in his suitcase or trunk. Vuitton obliged the moneyed transient by building luggage of every shape and size that could be used to carry beds, guns, books, canvases, ball gowns, paintbrushes and – for those with cars – spare tyres and tool kits. The swashbuckling writer Ernest Hemingway, a regular Vuitton customer, had one case tailored to carry hunting rifles. 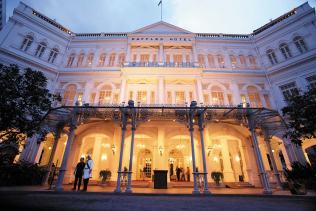 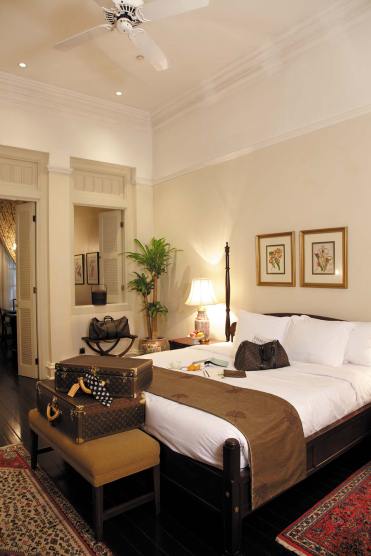 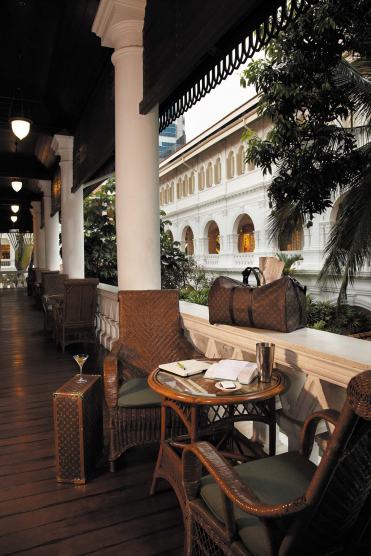 These carryalls became a canvas and a biography in their own right. Hotels would festoon the exterior of trunks and suitcases with colourful labels marked with a secret code that enabled their staff to know at a glance whether a traveller was a novice, a good tipper, a seasoned voyager, or a man with a padlock on his wallet.  Mementoes and notes would accumulate inside those trunks from trips that now take hours but could then take days or even weeks.

Louis Vuitton recently celebrated its rich heritage by opening a new maison in Singapore, the first in the company’s history to be dedicated to the traveller. Given its theme, it’s appropriate that the Maison of the Traveller is the first Louis Vuitton store surrounded on all sides by water, being fifteen metres out into the lagoon that separates the Marina Bay Sands complex from Fullerton Bay, in an inlet adjacent to the Singapore Strait.

Remarkably, seven decades after Maugham left Singapore and half a century after Greene drank his last cocktail in Hanoi, the spirit of Asia’s great heritage hotels lives on in four unique properties that remain the natural home of fine luggage and artistic travellers. In each hotel, it is possible to live like a lord out of a robust suitcase or trunk, while being inspired to paint or write by a sense of history, an enduring magic, and service that’s so good it almost makes happiness an obligation.

One arrives at Raffles along a curved driveway where the air is heavy with the scent of spring flowers and a recent rain shower. Suitcases are hastily gathered by dark-suited staff as the check in takes place at a counter that looks like it came out of a 1930s bank – the kind Bonnie and Clyde used to rob.

Raffles traces its history back to 1887, thirty-three years after Louis Vuitton opened his first store in Paris and invented the flat-top trunk, which allowed trunks to be stacked on ocean voyages (previously, they had rounded tops to allow water to run off them).

The atmosphere of the nineteenth century lingers on at Raffles, in the imposing Victorian architecture of its façade, the enormous darkwood staircase and the dining areas with their whirring fans.

Joseph Conrad, author of Lord Jim and Heart of Darkness, arrived here in 1888. Soon after, Rudyard Kipling, that most colonial of colonial writers who gave the world The Jungle Book, stopped by and left praise for the hotel’s kitchen – “Feed at Raffles,” he wrote, an exhortation to take all three of the daily feasts it would serve to its nineteenth-century guests. But whereas Kipling’s work has been Disney-fied and taken far from its origins, Raffles remains very close to the spirit of its roots.

This is most evident in the rooms. A suite on one of the veranda floors that surround the lush tropical garden is an irresistible invitation to creativity. A lobby that opens off to a marble and tile bathroom worthy of the Titanic at her best also leads to a bedroom and beyond, through an archway with columns, a study complete with a desk and sofa.

Only two hotels I have previously stayed in during my travels over three decades have made me want to sit down and commence writing immediately. One was the Carlyle in New York, the other the China Club in Beijing. Raffles has now become the third member of this very exclusive club. Leslie Danker, its resident historian, is not surprised.

“We have worked very hard to retain the historic atmosphere at Raffles”, he says. “Unique features of our heritage have been retained in all our rooms, even after the work required to bring the building up to the standards of a modern five-star hotel.”

Indeed Danker refuses to describe the extensive work done at Raffles in the 1990s as a “renovation”. He prefers the term “restoration”, and points out that most of the furniture in areas like the bar and billiard room are antiques, pre-dating the hotel’s rebirth.