Thomas Coldefy talks about sustainability in architecture and green skills

Thomas Coldefy and Isabel Van Haute designed the Hong Kong Design Institute. Two and a half years after it opened they reflect on what the building has taught them about sustainability in architecture. 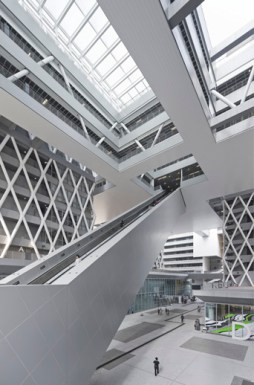 The escalator at the entrance of Design Boulevard

On a chilly day in March Thomas Coldefy and Isabel Van Haute stood next to the basketball court at HKDI and looked across to the escalator that threads between the building’s front towers, like a piece of modern kinetic sculpture. Nearby a team of workmen is raking stones and planting shrubs. Another construction team was tinkering with their tools near a walkway. Coldefy looked on like a father who has seen his child come home with a bandage on his knee.

“I am always concerned when I see crews working,” he says. “I always want to know if they are correcting some defect with the design, or struggling with some problem we didn’t anticipate.”

He needn’t have worried. The crews were engaged in routine maintenance and prettification of a terrace garden, but that never stops the Design Principal (Coldefy) and Artistic Director (Van Haute) of Coldefy & Associés, Architectes Urbanistes (CAAU) from being anxious. They see the HKDI building as their child, one that can teach them much about the success of their groundbreaking ideas.

“We believe that architecture should be sustainable,” he says. “But we have strong ideas about what that means.” For Coldefy and Van Haute in all their recent projects, and especially the multiple award winning Hong Kong Design Institute, the question of sustainability comes down to flow, to creating a building that can evolve and provide a means for interaction with the people who use it, one that gives them a sense of being valued.

This is very apparent in the HKDI building. A dismal majority of buildings in Hong Kong are storage depots – monolithic depositories for people, offices or products. For a city that has some of the world’s most expensive real estate, it also has the dreariest architecture. Outside of some honourable mentions like the I.M.Pei Bank of China Building or the Sir Norman Foster HSBC HQ, Hong Kong’s architecture looks like it was made from scrap in a Guandong factory, or from the packing boxes that once held the dazzling structures recently built in Beijing or Shanghai.

Coldefy and Van Haute’s building stands in stark contrast to this. It is the only building in Hong Kong that was designed specifically for a creative use and its special status is underlined by the fact it does not have to share its space with an MTR station, shopping mall or cookie-cutter apartments.

The team that designed HKDI are a precocious duo. Coldefy graduated from the Ecole Speciale d’Architecture in 2002 and has only been practicing for just over a decade, yet he has been awarded several prestigious prizes already and with Van Haute he was named as one of the “40 under 40”, by the European Centre for Architecture, Art Design and Urban Studies and the Chicago Athenaeum in 2010.  Van Haute and Codefy’s company, CAAU was awarded the HKDI project after a two-stage competition, in which 162 teams from 36 countries took part.  The 42,000 square metre building was the first major facility built in Hong Kong by a French architect. 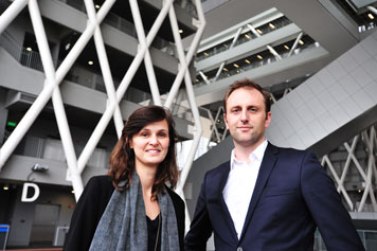 “We decided to take part in the competition because we felt the use of the building, as a design institute, and its site, surrounded by the MTR station plus residential blocks on three sides and the sea on the other, provided an interesting canvass for our “green” ideas and commitment to sustainability,” says Coldefy.

The team at CAAU were surprised and honoured when their names appeared on the short list of five teams that was announced in August 2006. After they were proclaimed the winners in November they realise they had a project that could help them define the kind of architecture that would benefit communities like Hong Kong, where space is at a premium.

“We spent a lot of time looking at buildings in Hong Kong during that time,” says Coldefy. “We could see that for many of them there was a conflict between all the different functions they had to perform. The HKDI project gave us the chance to make a different kind of statement.”

The CAAU team contrived to make the HKDI building what Coldefy calls a “metaphor” with the four towers supporting what he says is a “blank sheet” on which creativity is about to burst forth. With the four departments of HKDI occupying the towers, the “blank sheet” is also seen as a “field” in which the seeds of new design work can be sown.

“We wanted the structure to invite students and faculty to reflect on multiple and opposing situations,” says Van Haute.

“The building speaks of introversion and extroversion, modesty and exhibition, exclusivity and wide accessibility, the micro and macro city, of classicism and experimentation.”

Coldefy came up with the idea that the base of the building should be a giant “urban lounge “ where meetings and exchanges could take place, whilst taking advantage of internal and external green spaces. Two and a half years after the first students entered the building he is delighted with the way the structure is being used.

“We look for videos about HKDI activities on YouTube all the time,” he says. “We are always thrilled to see how many things happen in the open spaces, everything from concerts to dance competitions to sculpture. And the “blank sheet” has come alive. When we visit it’s exciting to see people using the spaces in different ways for creative projects. And it’s really satisfying to see that the local community has come to see the building as a resource.”

Coldefy and Van Haute were especially happy when they saw videos of the 2012 Graduation shows, when the Design Boulevard, as their “urban lounge” has come to be known, took on the trappings of a fashion catwalk.

“This is exactly what we hoped the space would be used for,” says Coldefy. “Putting the Graduation shows on the boulevard brought the creativity of HKDI’s students out into the heart of the community. It was such a vibrant and appropriate use of the space.”

Creating the HKDI structure also tested CAAU’s green skills.  The peripheral steel trellis structural system that CAAU used has reduced the number of columns and walls required, thus cutting the use of construction materials. The structure also channels natural breezes to the interior, to regulate temperature and reduce the amount of air conditioning that needs to be used in summer. The glass walls of the aerial platform promote the use of natural light, which further reduces energy consumption. In addition, the substantial area of indoor greenery partly offsets the carbon emissions that were caused by the building’s construction.

“I want my buildings to respond to the environment in which they are made, and we believe architects should do more to cut the impact that buildings have on our environmental resources,” says Coldefy.

In the wake of the critical acclaim that the HKDI building has won, CAAU has now opened an office in Hong Kong, which Coldefy sees as a city that can become a global leader in ecological design concepts that promoite low-carbon living.

“The Chinese government is committed to promoting green design and raising the energy-efficiency standard of buildings,” he says.

“I am expecting that more and more low-carbon and environmental-friendly buildings will appear in mainland China and Hong Kong and I look forward to contributing to the sustainable development of this region.”

Which means Coldefy and Van Haute are likely to be a regular presence at HKDI, where they will continue to check their “child” for bandages, making sure it matures into a bright young adult, valued by all its friends.