The Modern Dandy and Some Rough Guys 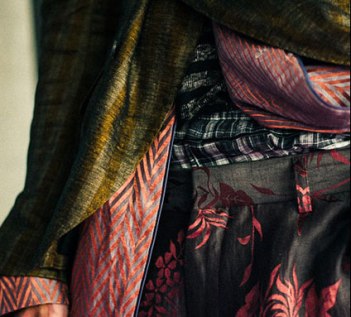 Haider Ackermann does not thrill to describing his inspirations. He doesn’t care to be tarred with their brush. Cornered among the weeds in the garden after his presentation, he admitted, under some duress, that in his new collection, “I saw Keith Richards, Iggy Pop.” Then he clammed up: “I don’t like to talk about it.”

But some weeks before, Mr. Ackermann had seen his first Rolling Stones concert. The sight of Mick and especially Keith vamping onstage energized him, and came back to the designer as he styled the collection. They have the quality that he looks for in “the modern dandy,” the man he seeks to dress — a “decadence we’re missing now.”

The Ackermann aesthetic for men has been consistent since it was introduced, first at the 2010 Pitti Uomo fair in Florence, then at its regular show slot during the 2013 Paris fashion week calendar. It’s a lustrous, Byronic take on the male wardrobe, clothes for a wine-dark world in which a waistcoat is essential but jeans are expendable. A fair complaint about Mr. Ackermann’s work is that it has remained too rooted in this narrow vision, gorgeous but precious. But he has been eking out new nuances each time. Read more..